Travelling through the Amazon in the 1540s, Spanish explorer Franciso de Orellana discovered a thriving agrarian civilisation with uniquely fertile soil. Today, the nutrient-rich terra preta (black earth) soils remain in the Amazon’s Xingu region, even if the inhabitants largely did not survive the conquistadors.

The key to these soils is biochar, a charcoal-like substance produced from burning biomass in the absence of oxygen, a process called pyrolysis. The ancient Amazonians are thought to have produced it by burying smouldering organic matter. Now biochar, often referred to as “black gold”, is a rising star of agricultural circular economies, using up waste residues that would previously have been burned or left to decompose, producing heat as a renewable source of energy, acting as a soil improver and pesticide, and as a food supplement to reduce methane emissions in cattle.

The icing on the cake is that biochar acts as a carbon sink, locking CO2 out of the atmosphere for hundreds of years. This has led to behemoths such as Microsoft and Shopify buying up biochar CORCs (CO2 removal certificates) from Finnish carbon off-setting platform puro.earth.

Once you can offer a competitive product, farmers know it makes sense to invest in long term soil improvement

Biochar’s physical and chemical structure enables it to act as a sponge, retaining moisture, micro-organisms and important nutrients such as nitrogen and phosphorus as well as gases, including carbon dioxide and nitrous oxide.

All this has the potential to help the world’s estimated 525 million smallholder farmers, many of whom are struggling with depleted soils and drought. In studies, biochar has been shown to be of particular benefit in poor soils, making it of value where deforestation and monoculture cropping have depleted the earth.

HUSK, a social impact business operating in Cambodia, reports that farmers using its biochar are seeing improvements in crop yields. HUSK utilises rice husks, a by-product of processing the third-most produced crop in the world, and at 150 million tonnes a year globally, a massive potential source of biomass. 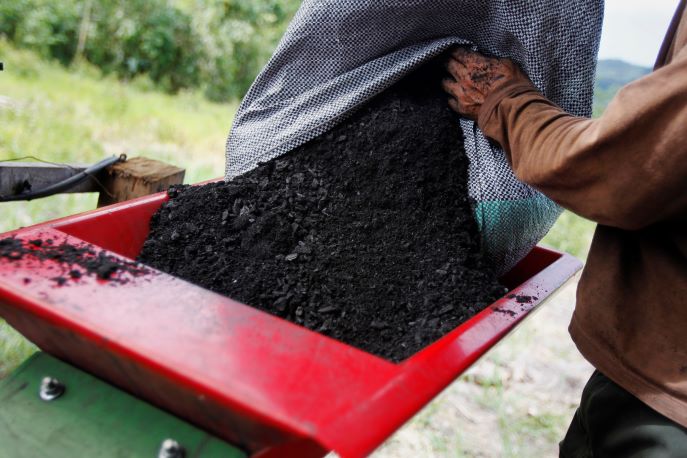 A worker prepares to grind biochar made from bamboo residue in Peru. (Credit: Enrique Castro-Mendivil/Reuters)

The concept of biochar is not new to farmers in Asia, who had been producing it for thousands of years. “The challenge is that farmers no longer have access to this biomass,” says HUSK chief executive and cofounder Heloise Buckland. “The rice husk ends up being piled up in one place at the industrialised rice mills. And farmers buy synthetic fertilisers, which further degrade their soils.”

The company currently operates out of Cambodia’s largest organic rice mill. Two continuous pyrolysis units turn the husk into biochar, which is mixed with nutrients, compost and other other rice sector by-products. With 10,000 tonnes of rice husk produced by just one mill, the company is currently utilising just 8% of the available biomass to create 600 tonnes of its carbon-based range of fertilisers every year. These organic fertilisers are sold to farmers at a competitive price of $400 to $500 a tonne via a network of agricultural cooperatives and input distributors across the country. The company is also piloting a “super farmers network” for women, who earn extra income by selling the products door to door and earning a commission.

In trials HUSK has carried out over the last three years, farmers are seeing a positive return on investment of between 15% and 25% from a combination of higher yields and a reduction in the need for fertiliser, the price of which has doubled since 2020. Cambodian soil is in a “desperately bad state”, says Buckland, citing a culture of intensive crop cycles and over dependence on synthetic fertilisers. “However, the increase in fertiliser prices has had a significant impact on farmers, and once you can offer a competitive product, farmers know it makes sense to invest in long-term soil improvement.”

An ECHO2 module operating 24x7 has the capacity to remove approximately 5,000 tonnes of CO2 equivalent (CO2e) per year

Soil improvement is one of the steps in a pioneering circular initiative in South Australia, which is using pyrolysis to produce heat for the glasshouse of Tantanoola-based Holla-Fresh, which produces hydroponically grown culinary herbs. The ECHO2 unit, supplied by technology provider Rainbow Bee Eater, creates clean syngas from timber and agricultural residues that are usually burned or left to decompose in land fills, generating CO2 emissions. The company installed its first ECHO2 commercial module at Holla-Fresh in 2018, and the biochar that results from the process is sold back to farmers as a soil improver by Bio Gro, a local agricultural solutions provider, which also supplies the Holla-Fresh unit with its biomass.

Rainbow Bee Eater has a second project coming on stream in 2023, with six ECHO2 units that will power greenhouses growing tomatoes and capsicums at Katunga Fresh in Victoria, Australia. Peter Burgess, managing director of Rainbow Bee Eater, says he has identified 100 projects that can benefit from similar collaborations.

The problem has been obtaining finance for further developments due to the novelty of the technology. This is where carbon credits are changing the landscape. An ECHO2 module operating 24x7 has the capacity to remove approximately 5,000 tonnes of CO2 equivalent (CO2e) per year, one of the reasons it is one of the projects chosen by Shopify and Microsoft, who have both invested in CO2 removal certificates (CORCs) based on puro.earth’s puro standard, which has developed a methodology for biochar.

Speaking in a video interview with puro.earth, Burgess said: “The difficulty for us as the creator of these projects is getting finance. If puro.earth can enable forward contracts … we can then take that to a financier maybe even a bank and that will enable us to finance the project. It’s that simple. Most of (these projects) won’t happen without this sort of encouragement.”

Buckland at HUSK describes carbon credits as “a total game changer”. “We certified with the EBC (European Biochar Certificate) in 2019 and started selling the credits at $30 a tonne. Within one year, we tripled that. We've now sold at $200 a tonne and and we are sold out until the last quarter of 2023. So, there’s a huge demand.”

She welcomed the methodology for biochar published by global standards body Verra in August. “(Verra) is a global standard and people will recognise and trust that, and I think that will really help to inject more finance into the biochar sector.”

HUSK plans to scale operations in Cambodia, with a roadmap to replicate further afield in Egypt and South America, and the eventual aim of putting 1 million tonnes of carbon back into the soil by 2025. Carbon credits will also enable HUSK to keep prices of its core product low. “Our end consumers are so price sensitive…  we can't add $0.50 onto a kilo of biochar because they won't be able to afford it. These are people earning $5 a day,” she says.

"Effectively the income (from credits) enables us to put the carbon into an organic based fertiliser … So in terms of additionality, for us, it really is a very significant part of our business model.”

Biochar carbon credits also have the potential to help lift cocoa farmers out of poverty.  The Ithaka Institute, a Swiss-based open-source network for carbon strategies, has been partnering with chocolate producer Barry Callebaut to trial the production of biochar on cocoa farms using agricultural residues.  Around 100 “champion farmers” in Ghana and Indonesia are making biochar using technology developed by Ithaka, and are also being taught to build their own efficient pyrolysis units out of earth. 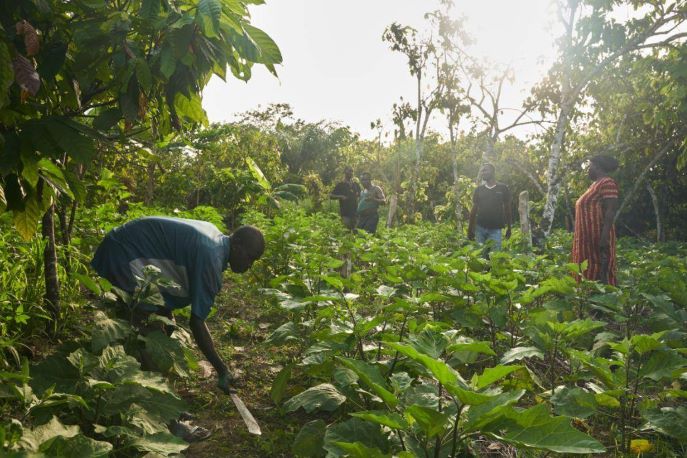 The application of biochar at farm level can help reduce chemical inputs and improve soil and yields. (Credit: Barry Callebaut)

Geza Toth, an independent consultant at the Ithaka Institute, estimates that by 2025 tens of thousands of cocoa farmers could be participating. But, he says “you need to have the farmers buy in gradually and you need to make sure that you incentivise the farmers”.

The biochar being produced by farmers in Ithaka’s trials has been awarded EBC certification. “These certificates are trading today at a very high price because these are permanent carbon sinks,” says Toth. “And the farmers in our model get all the benefits.”

Toth says these “carbon farmers” could make an extra $150 a hectare a year from the credits, a significant sum when Fairtrade estimates the average cocoa farmer earns less than $1 a day.

The farmers are further benefiting from increased yields from biochar application. Toth says cocoa farmers in Ghana report increased average yields of 30%, a substantial figure in a country where deforestation has wreaked havoc on soil quality. “In a well-managed plantation you can get up to two or three tonnes of cocoa per hectare, but in Ghana it is half a tonne,” says Toth.

For hundreds of years, farmers in west Africa had no say in how they wanted to do things, but this is changing

Toth warns biochar is not a panacea, and needs to be part of an integrated agroforestry system.  “You need to have biomass, you need to plant trees.”

And because of variations in pH levels, not all biochar is suitable for all soils. Moreover, if misapplied or badly produced, the benefits of biochar can be lost.

Ultimately, though, Toth sees biochar as a potential disruptor. “For hundreds of years, farmers in west Africa had no say in how they wanted to do things, but this is changing. And if they want to produce even their own fertilisers, then tomorrow they may decide who they sell their cocoa to. They might even determine the price of cocoa… This is a disruptor.”

Karen Luckhurst is sub-editor for The Ethical Corporation and The Sustainable Business Review and has written for the Observer and Independent.

A week of getting real about the enormity of the climat...
Brand Watch: Can blockchain help indigenous people turn...
PepsiCo’s biggest challenge: winning over millions of...
Winemakers turn to sustainability to ride the storms of...
comments powered by Disqus