Mark Hillsdon reports on the rise of silvopastoralism, livestock farming that works with nature, rather than against it, highlighting examples in Brazil, Kenya, and the UK

Cows have a justifiably bad name for their climate impact, from methane emissions, to water usage, to driving deforestation, with livestock estimated to be responsible for 51% of greenhouse gases in Brazil.

But they can also be farmed in a way that can tip the scales into positive environmental impact. It is a form of agroforestry called silvopastoralism, and is growing in popularity around the world.

On the Brazilian Cerrado, Bruno Junqueira de Andrade has been steadily introducing silvopastoralism to Ecofarms, the farm he took over from his father in 2015. He practices rotational gazing, with cattle given access to nutritious forage grasses, herbs, shrubs and trees. This improves their diet, while the plants boost the fertility of the soil and improve water filtration. The trees also provide shade, offering livestock a welcome respite from the heat.

We need more engagement from consumers for sustainable food. This is happening, but slowly

There are important financial benefits, too. The combination of different plant species ensures fodder is available all year, so there is no longer any need to buy in feed. The plant diversity supports pollinators, and ranchers can also harvest other forest products such as fruit, honey and sustainable firewood.

The addition of trees and other plants can also help to neutralise emissions by increasing carbon storage.

“The whole farm is sustainable,” says Andrade, with 45% of the 812 hectares preserved as native forest, and the rest being turned over to silvopastoralism year-by-year. 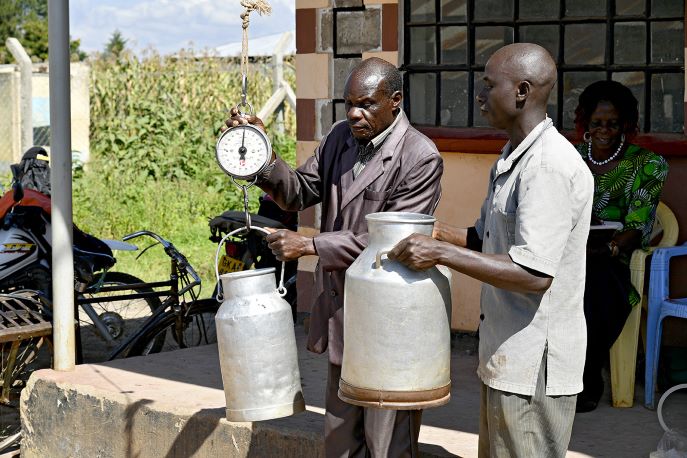 It’s an approach that means Andrade can sell around 300 head of cattle each year through Granbeef, a sustainable Dutch meat brand, with certification by Rainforest Alliance. But a further 800 cows still go to the Minerva slaughterhouse, one of the biggest beef exporters in South America, which, he says, “don’t pay a price for sustainability yet”.

“It’s not easy,” he continues. “We need more engagement from consumers for sustainable food. This is happening, but slowly.”

Ten thousand kilometres away in Kenya, on the foothills of Mount Elgon, cattle farming takes place on a completely different scale. Here smallholders keep just one or two cows, explains Jonathan Domarle, a senior project manager at Livelihoods Funds, which provides impact investment to support more sustainable food production. The organisation is halfway through a 10-year project to revolutionise dairy farming in the region.

Many cows aren’t fed properly, he says, especially in the dry season, when there is little more than nutrient-poor maize stalks available. As a result, cattle are often in poor health, while milk production is low.

Yet the cows are often the most profitable part of the farm, he says, thanks to a boom in milk sales across Kenya. By helping the farmers to look at the economics of their farm, Domarle and his team are helping them to meet this demand.

As in Brazil, the emphasis is on improving the quality of the fodder given to the cows, although in this case to improve milk production. By encouraging the farmers to replace some of the maize they grow with nutrient-rich fodder crops such as elephant grass and the shrub Calliandra calothyrus, farmers can double the daily milk production from each cow to seven litres, while also boosting its protein content.

The project is also about reducing carbon emissions, says Domarle, both through farming methods and improving the efficiency of the cow, with a better diet helping to cut the amount of CO2 produced per litre of milk.

“The key aim is to increase the quantity of milk that each cow produces but without asking the farmer to buy more feed from outside,” he says. 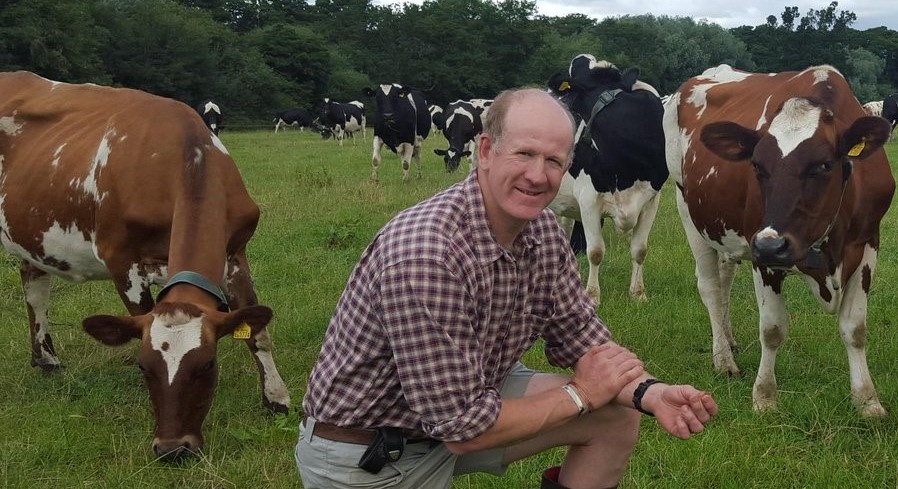 Tim Downes has introduced more trees on his beef and dairy farm in Shropshire. (Credit: Twitter)

The plots are often no more than couple of hectares, but many are now surrounded by ditches that collect rainwater, their banks carpeted in lush green grasses and sweet potatoes, while trees – some planted for timber, some for fruit – also mark out the boundaries between each plot. This has led to a root system that holds the soil together and prevents erosion.

The scope of the project is huge and has so far engaged with more than 15,000 farmers. Most of the milk is consumed locally but there are also opportunities to sell any excess to local co-operatives and milk companies such as Brookside, which is partly owned by Danone.

In the UK, Tim Downes has found another benefit of silvopastoralism: plant the right trees, he says, and cows can self-medicate.

His Shropshire farm has 150 beef and 500 dairy cows and went organic in 1998. Since then, he has worked with the Woodland Trust to introduce more trees, including willow, which is rich in salicylic acid, an active ingredient of aspirin. By grazing the trees, and eating a nutrient rich willow hay during winter, the farm’s medical bills have dropped considerably.

It’s a long-term progression. But farming is very long term

Downes has also planted other native trees, including sycamore and hornbeam, where the emphasis is on improving the soil and pasture. “Rye grass is the mainstay of grassland land production in temperate regions (but) it doesn't root deeply so accesses nutrients in the top of the soil,” he explains.

Different trees have different rooting zones, he continues, and bring up different minerals to the surface, allowing different forage crops to thrive. The trees also make the soil more friable, and he has found far more worms at the base of trees then in the more compacted pastures that don’t have the sylvan cover.

Downes sells much of his beef to Waitrose’s organic scheme. “We couldn’t access that market with Waitrose if we were farming intensively,” he says, while much of his milk goes to the Organic Milk Suppliers Co-operative. The way in which he runs his farm has also allowed him to access the lucrative American organic market.

“It’s a long-term progression,” he adds. “But farming is very long term, and we can’t change it in six months.”

A week of getting real about the enormity of the climat...
PepsiCo’s biggest challenge: winning over millions of...
Can Big Food rise to the climate challenge?
Winemakers turn to sustainability to ride the storms of...
comments powered by Disqus