Sarah LaBrecque reports on nascent efforts by farmers and food brands including General Mills, Unilever, PepsiCo and Nestle to turn the tide on decades of destructive industrialised agriculture in the U.S.

“Soils should look like black cottage cheese,” says North Dakota farmer Gabe Brown.  Brown runs a 5,000-acre farm and ranch, but he is far from a typical midwestern farmer. A pioneer of the regenerative agriculture movement in the United States, Brown is on the road “280 days a year”, he tells me in a recent interview, doing talks, liaising with other farmers and stakeholders, and imparting what he knows to anyone who will listen.

Of which there are growing numbers. According to a new report by the non-profit Forum for the Future, the regenerative agriculture movement in the U.S. has “never had more momentum”. General Mills, Unilever, PepsiCo and Nestle are among the major food companies pledging large-scale support for this type of farming, which emphasises soil health, biodiversity and avoids the use of synthetic pesticides and fertilisers. Amazon-owned Whole Foods called it the number one food trend in 2020.

Of those food conglomerates recognising the value of more nature-based production, General Mills has been particularly vocal. It has pledged to advance regenerative agriculture on 1 million acres globally by 2030, an area that represents approximately 25-35% of its worldwide sourcing footprint. So far, more than 200,000 acres are enrolled in programmes they support, farmland located mostly in the Northern Plains, Southern Plains and Great Lakes regions of the United States and Canada, according to a spokesperson.

General Mills is a founding member of the non-profit Ecosystem Services Market Consortium (ESMC). It runs an Eco-Harvest market programme, giving credits to wheat, oat, corn and dairy farmers in the U.S. and Canada for “improved ecosystem services” achieved through techniques such as using cover crops and reducing tillage. Started in 2020 as a pilot with the Kansas Department of Health and Environment, General Mills has now invested $3 million to scale up the programme, which quantifies and verifies carbon, greenhouse gas and water outcomes on farms through independent third parties.

General Mills is also partnering with tech firm Regrow Agriculture to monitor 175 million acres of farmland via remote sensing in North America, Europe and South America. “A key to scaling regenerative agriculture across any region hinges on measurement,” says the spokesperson, adding that the partnership with Regrow will enable them to get a more accurate picture of the impact of regenerative practices and their net effect on emissions. Basically, they will be able to see if all of this is working.

In 2018, General Mills approached Brown’s consultancy, Understanding Ag, to help teach oat farmers in the Northern Plains region of the U.S. about regenerative practices. “General Mills does not buy directly from farmers. They buy from grain terminals,” says Brown. “But they saw the value and resiliency to their supply chains (that could result) if they educated farmers.” 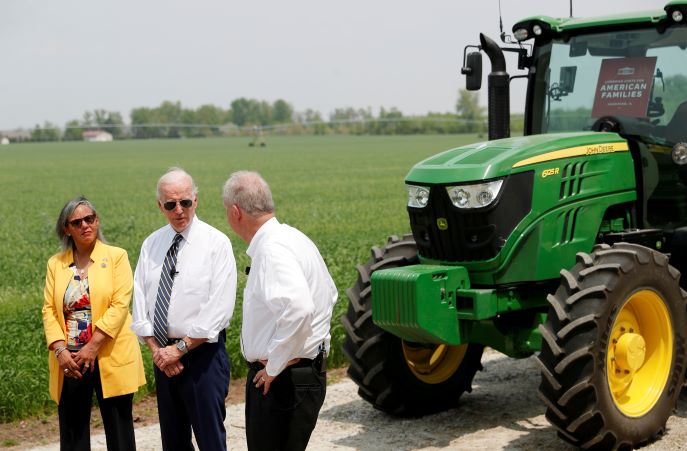 Joe Biden visits a family farm in Illinois - the U.S. Farm Bill is due to be updated later this year. (Credit: Tom Brenner/Reuters)

It all sounds very altruistic, but what’s the true scale of this movement? According to Dr Kristine Nichols, a soil microbiologist and regenerative agriculture expert, of the 900 million arable acres in the U.S., only about 1.5% is being farmed regeneratively. The Forum for the Future report says that there have been some positive shifts in the last few years, “around policy change, valuation of ecosystem services, alternative types of financial flows, demonstration of the business case and coalition-building amongst farmers”, but these shifts are still nascent.

Nichols and Brown both point to crop insurance as a major sticking point. If farmers want to receive crop insurance for something that happened in the growing season, they need to have followed certain rules, she says. “Meaning you had to have treated with an herbicide, or if you had a cover crop, you had to terminate that cover crop by a particular date; you had to have added the recommended amount of fertiliser.” Whereas conventional agriculture is practiced in a very prescriptive way, regenerative is “almost limitless”, with regard to the cultivation and management options it might encompass, she explains.

Another barrier to the transition is upfront cost: seeds for cover or companion crops need to be bought, new harvesting or storage equipment procured, livestock potentially integrated. This same type of transition-centred investment is faced by farmers thinking about converting to organic.

More than 90,000 acres planted regeneratively in 2021 meant a 27% reduction in GHG emissions

In an attempt to overcome those barriers, a group of unlikely allies came together in 2018: the Practical Farmers of Iowa, Unilever, PepsiCo, Cargill and ADM. The non-profit and two food brands, plus their suppliers, began working together on a regenerative agriculture project after realising there was overlap both in the region where they sourced soy and corn, respectively, and in their long-term sustainability goals.

In Iowa, as much as 90% of the land is devoted to agriculture, and many farmers produce both soy and corn. By implementing a regenerative agriculture programme for farmers who provide crops for Unilever and PepsiCo – the former for use primarily in Hellmann’s mayonnaise – a certain amount of de-risking for those farmers can be achieved.

Herrish Patel, nutrition North America general manager at Unilever, says that part of the reason they’ve been able to scale the project up is because of this shared-cost approach, where not only farmers but a network of interested parties, all shoulder the financial risk. “It's a shared cost; you’ve got to believe in it and share that investment,” he says.

And the result? The more than 90,000 acres that were planted regeneratively in 2021 as part of the program meant a 27% reduction in greenhouse gas emissions, according to PepsiCo. 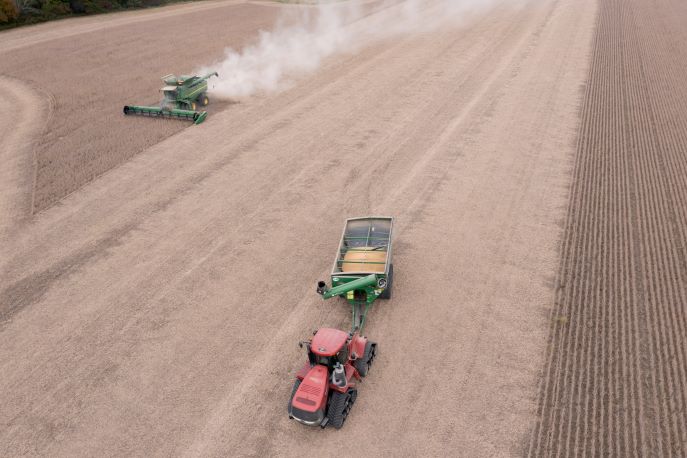 Only about 1.5% of the U.S.'s 900 million arable acres is being farmed regeneratively. (Credit: Dane Rhys/Reuters)

Having such proof points is helpful in trying to affect change at a policy level, says Patel. It’s a reference to the U.S. Farm Bill, which is due to be updated next year, although he remains non-specific about what change exactly Unilever is pushing for. “It's too early to share. (But) we will continue to do what we're passionate about, and have a seat at the table and influence as much as we can.” There are rumblings that the United States Department of Agriculture (USDA) is alert to the need to adapt. Earlier this year it announced a plan to double the country’s cover crop plantings to 30 million acres by 2030 and its Partnerships for Climate-Smart Commodities programme, set out in February, “will provide up to $1 billion for pilot projects that create market opportunities for commodities produced using climate-smart practices”.

Across the border in Canada, the Trudeau government has recently announced increased funding to boost regenerative agriculture, with C$25 million ($192.77 million) earmarked for the cost-shared Resilient Agriculture Landscape Program. Although sustainable agriculture proponents, such as the coalition Farmers for Climate Solutions, had hoped for more, they said there were “many positive outcomes” from the proposed new agreement.

Meanwhile, General Mills is working with charity ALUS  on the Growing Roots programme, which will support farmers in communities in Saskatchewan and Manitoba who are interested in going regenerative. According to Lara Ellis, senior vice-president, policy and partnerships at ALUS, interest from farmers has been high, with waitlists for participation now being compiled.

I have never been on a single farm, including my own, where the soil is not degraded

While there is still much to be done to scale up regenerative farming in Canada, Manitoba-based Robynne Anderson, who heads up consultancy Emerging Ag, says certain practices are already widespread. “Most of western Canada, probably about 90%, moved to conservation tillage back in the 90s,” she says.

A company called Flexi-Coil introduced a piece of equipment that allowed for direct seeding: planting via a small burst of air, and the practice was readily taken up.

Back in the U.S. Midwest, adaptation can’t come too soon. Iowa soil, for instance, was once among the most fertile on the planet, but is now rapidly being depleted. The average topsoil depth has decreased from around 14-18 inches at the beginning of the 20th century, to six to eight inches by the year 2000. 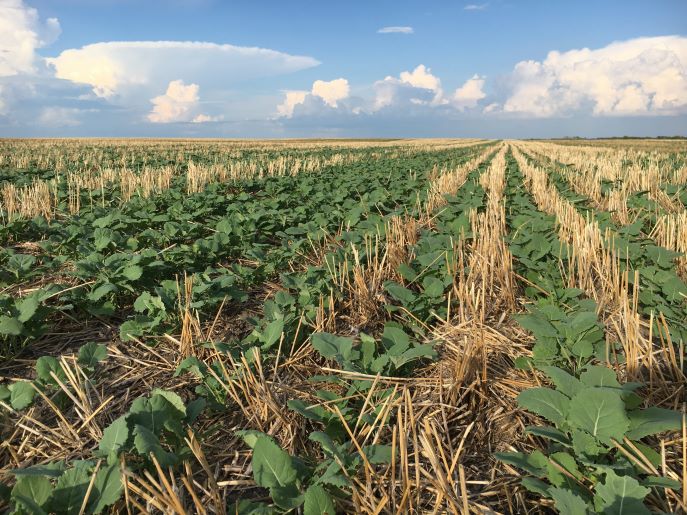 Cover crops on a canola field in Canada. Most farmers in western Canada practice no or low-tillage of soil (Credit: Canola Council of Canada)

“I have never been on a single farm, including my own, (where the soil) is not degraded,” says Brown. “With the vast majority of farmers we work with, 75% of the carbon that was once in those soils is now in the atmosphere.”

Since transitioning to regenerative methods in the 90s, however, Brown’s farm has quadrupled the amount of organic matter in its soils, which are now able to infiltrate 30 inches of rainfall per hour, up from half an inch per hour. “(That’s) an unheard of amount,” he says.

And as far as infiltration goes, signs do point towards an increased understanding among large companies and government, of the value of agricultural methods that put soil health first. Despite the barriers, that shiny altruism that often pervades corporate sustainability agendas perhaps isn’t as bogus as it can be in other sectors. “There's no ill will amongst anyone working in this space,” says Anderson. Just a diverse group of people working towards a more sustainable agricultural and food future through better soil health: that coveted black cottage cheese.

Sarah LaBrecque is a freelance writer who splits her time between Ottawa, Canada, and Hertfordshire. She writes about sustainable business and ethical living for publications such as the Guardian, Positive News and for a range of B2B clients.

Will 2023 be a watershed moment for corporates on addre...
Brands failed to meet promises to protect forests. We c...
A week of getting real about the enormity of the climat...
PepsiCo’s biggest challenge: winning over millions of...
comments powered by Disqus