When the Cocoa & Forests Initiative was signed in 2017 between the world’s major cocoa companies, the governments of Ghana and Ivory Coast, and IDH, the Sustainable Trade Initiative, there was optimism that the ambitious public-private partnership would turn the tide on devastating forest loss from cocoa.

The two African countries have lost around 94% and 80% of their forests, respectively, in the past 60 years, one-third of it to make way for growing cocoa.

Low productivity from aging cocoa trees grown as a monocrop have led scores of impoverished smallholder cocoa farmers to make illegal incursions into standing forests, where the soil is more fertile. Along with stronger enforcement of national forest policies, the central idea of the initiative was to replace single-crop cocoa plantations with an agroforestry model that intercrops cocoa with a mix of shade crops, hardwood trees and other cash crops.

This would provide smallholder farmers with a second source of income, boost food security and improve the health of the soil so that it sequesters carbon and is more resilient.

So what has gone wrong? A report on 2021 activity in Ivory Coast from the World Cocoa Foundation (WCF) in July said that cocoa companies had distributed more than 11 million forest trees to cocoa producers since 2018, and last year mapped over 500,000 farms, achieving 72% traceability in their direct supply chains. The WCF also said that forest disturbances in the cocoa belt in Ivory Coast had decreased by 47% compared with the previous year. 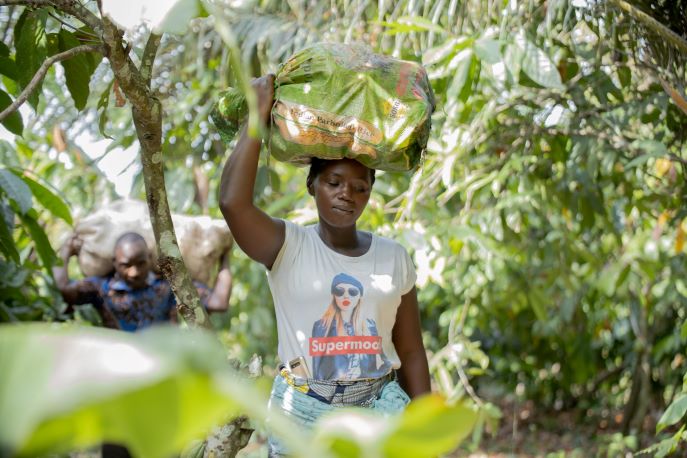 Women cocoa farmers are being incentivised to send their children to school. (Credit: Nestle)

However, a different picture is presented by the NGO Mighty Earth, which provides data for an annual sustainability scoreboard of the cocoa industry, and has created an open source Cocoa Accountability Map. It found that between January 2019 and January 2022 alone Ivory Coast lost 19,421 hectares of forest within cocoa-growing regions, while Ghana lost 39,497 hectares.

Most striking has been the failure of agroforestry efforts, Mighty Earth said. Despite numerous tree-distribution campaigns in Ivory Coast, the survival rate of distributed trees is less than 2%. The NGO said this was due to a failure to consult local communities in designing agroforestry projects, distributing trees that never got planted, or died because they weren’t maintained and then were not replaced.

One company the NGO cites for success in its agroforestry efforts is Nestle, which has invested 2.5 million euros on a project to promote agroforestry practices among farmers on the periphery of the  Cavally Forest Reserve, one of the biggest stands of protected forest in Ivory Coast, and to reforest the 43% of the reserve that has been degraded.

Gerome Topka, Ivory Coast country head for the Earthworm Foundation, which is working with Nestle, said the key to success has been to involve smallholder farmers in decision making, something that is often not the case. “The local communities are choosing the trees and setting up the nurseries. The local communities are planting the trees in the Cavally Forest Reserve, and are involved in all the work we are doing on the periphery of the forest reserve,” he said.

He said some 150 “infiltration” farmers, who had been illegally planting cocoa in the reserve, had approached Earthworm asking for help to make an alternative income. One promising enterprise has been to breed snails to sell as escargot to restaurants in Abidjan, which Topka said can earn them far more than cocoa.

Agroforestry initiatives are only one strand of a larger effort by Nestle and others to boost productivity of cocoa farmers in west Africa, the lowest in the world, and reduce the pressure on the forest. 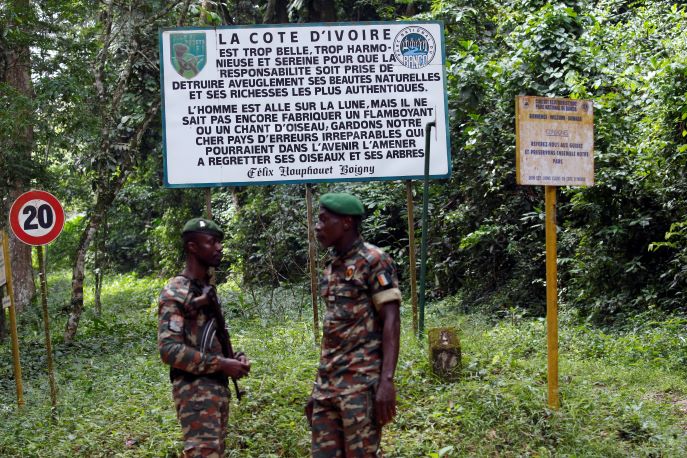 Nestle recently launched an income accelerator programme to help incentivise cocoa farmers in Ivory Coast to adopt more sustainable practices. In a pilot started last year, more than 10,000 families received cash incentives of up to 500 Swiss francs ($542) for adopting good agricultural practices, such as pruning, engaging in agroforestry, diversifying their income through growing other crops and sending their children to school.  A key feature is that women, who Nestle says are the most likely to ensure children go to school, get half the income, which is paid directly through mobile payments.

The programme, which Nestle is doing in partnership with IDH, is slated to be extended to Ghana in 2024, and rolled out to Nestle’s global cocoa supply chain of 160,000 families in Africa and South America by 2030.

Similarly, Mars Inc, together with cocoa supplier Touton, and the NGO Solidaridad, are part of a project by impact investment fund Livelihoods Venture testing different combinations of solutions with sets of cocoa farmers in Ghana, in an attempt to help boost crop productivity.

Kevin Rabinovitch, global sustainability vice president for Mars, said West African cocoa farmers get yields of about 400 kg per hectare, compared with about 1 tonne per hectare for Latin American smallholders, “If we can find a way to help them, they aren’t chasing a 10% improvement, it’s 100%”.

But the right formula of interventions needed to unlock those productivity gains has remained stubbornly elusive. In an interview last year, Bernard Giraud, president of Livelihoods Venture, highlighted the critical need for sustainable finance in Ghana, where there is a high level of inflation.

“Also, when you look at the interest rate for a farmer if he wants to finance the replacement of old cocoa trees, it is just impossible. There is no bank or financial institution providing a long-term loan because the risk is high,” he said. 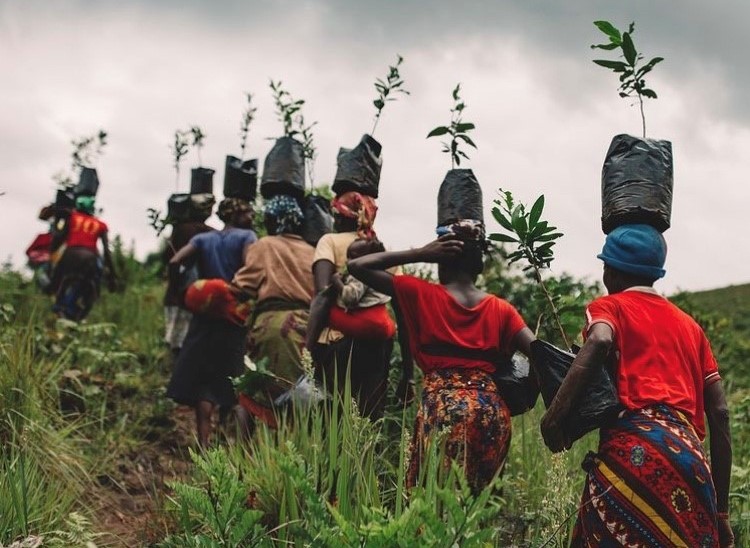 Samuel Jinapor, Ghana’s minister for lands and natural resources, told an event on the Cocoa & Forests Initiative (CFI) at the Ghana pavilion at COP27 that signatories must focus on lifting incomes for smallholder farmers. “It’s one thing saying farmers must adopt sustainable farming methods, but how can they do that if they receive close to nothing in income from this billion-dollar industry?”

The other big barrier to progress has been lack of  traceability. A report by supply chain transparency initiative Trase ahead of COP27 said that while companies in the CFI say they have mapped over 70% of their direct supplies, over 55% of cocoa from Ivory Coast is untraceable, either because it is indirectly sourced by traders from local intermediaries, or exported by traders that disclose no information about their suppliers.

Trase said while CFI was a positive step, so far it “has done little more than bring together a handful of individual corporate sustainability projects. To halt cocoa-driven forest loss, companies must go beyond the traceability of their own individual supply chains to invest in initiatives at the landscape level … improving governance and land-use planning through formal collaboration with stakeholders including central and local government, farmers, communities and civil society organisations, not only for cocoa, but all land uses in the area.”

Topka at Earthworm agreed that it was difficult to see what the CFI had achieved in its first five years, which he put down to companies taking a siloed, competitive approach, reporting on their individual initiatives, rather than “putting their energies together”.

However, with the European Union and the UK both bringing in legislation that seeks to ban the import of illegally produced forest-risk commodities, including cocoa, there are some positive signs of more collaborative approaches in both countries.

Violaine Berger, senior advisor of IDH, says last March several companies in the CFI, along with civil society groups and regional government, signed a production protection inclusion (PPI) agreement covering the entire Cavally region, with the ambition of ensuring products such as cocoa, rubber and other agricultural products are not associated with deforestation.

“This is the first PPI compact in (Ivory Coast) and … the World Bank sees it as a model that could be implemented in other regions (of the country),” she says.

But she added that it was critical to get more funding for the “protection” element of the agreement, with only half a dozen agents patrolling 67,000 hectares of the Cavally forest.

In Ghana, too, the UK-government funded Partnership for Forests has been supporting cocoa trader Touton to achieve a deforestation-free cocoa landscape in the Juabeso and Bia districts, working with partners including Solidaridad, Mondelez, Ferrero and Mars.

According to Partnerships for Forests, the project, which has been piloting dynamic agroforestry systems, has brought over 180,000 hectares of land under improved and enhanced management, and by this year more than 50,000 farmers are expected to have been trained and supported to produce climate-smart cocoa, with incomes expected to increase by nearly 50%.

Daan Wensing, chief executive of IDH, told the COP27 event that it has taken five years of the CFI to put a governance framework and framework for action in place, and to test different agroforestry models, working with the companies and governments. The second phase will be about moving into implementation at scale.

“Now it’s about tackling the difficult issues, and that will require courage and real partnership”, not only between the companies and the two host governments in the CFI, but outside partners, including the UK and EU, that are legislating for deforestation-free cocoa imports.

“It’s crucially important for regulators in those markets to embrace CFI, to make it work, turn it into a delivery agent so we all move forward on the pathway.”

Will 2023 be a watershed moment for corporates on addre...
How deforestation risk continues to be blind spot for b...
Can Big Food rise to the climate challenge?
'To reach net-zero, we need to help farmers revers...
comments powered by Disqus