Angeli Mehta reports on the growth of the First Movers Coalition, which has doubled in size in the past year, and expanded to include cement and concrete

While there was frustration that governments failed to raise the bar on climate action at COP27, some key announcements made on the sidelines of the international climate conference showed that the private sector is powering ahead regardless.

Launched only a year ago at COP26 in Glasgow, the First Movers Coalition (FMC) is a global initiative to harness the purchasing power of companies to decarbonise seven “hard to abate” industrial sectors, which currently account for 30% of global emissions. At a press conference in Sharm el-Sheik, U.S. Climate Envoy John Kerry said the coalition had grown from 34 to 67 companies in the space of a year.

He said he was confident the world would get to a no- or low-carbon economy because “companies with major impact on shareholders and stockholders around the world, with major impact on the whole investment chain, (are) setting an example that other people have a hard time ignoring. And we will get there because the marketplace itself is making these decisions.”

Coalition members have collectively made $12 billion worth of purchasing commitments in hard-to-abate sectors such as steel, aluminium, shipping, trucking and aviation, agreeing to pay the high price tags they command now in order to create a market, which will allow costs to eventually fall. These sectors are responsible for over one-third of global emissions.

One of the biggest challenges we have across the decarbonisation agenda is that we need more money. By creating firm demand signals, it unlocks capital

The beauty of the collaboration is that partners are both producers and purchasers of each other’s materials.

The newest pillar of cooperation is cement and concrete. At COP27, General Motors, energy groups Vattenfall and Orsted, alongside ETEX and RMZ from the construction sector, said 10% of their purchasing in 2030 would be from low-carbon cement and concrete. These technologies don’t yet exist at scale: the challenge for the coalition is to get them there.

Jim Andrew, PepsiCo’s chief sustainability officer, told an audience at COP27 that “we all know that one of the biggest challenges that we have across the entire decarbonisation (agenda) … is that we need more money. And by creating firm demand signals, it unlocks capital.” 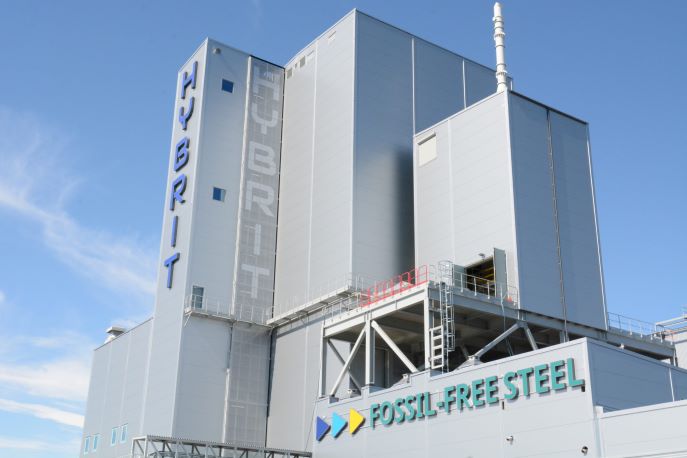 “Whether we’re talking about transportation, cement, or aluminium – these are all systems problems. Any company working by itself can make great progress, but you can't get to zero or even close to zero, you need that whole value chain.”

However, those strong demand signals alone are not enough. Derek Baraldi, head of sustainable financing and investing at the World Economic Forum (which hosts the coalition) says concessionary finance and collaboration between public and private sectors is required to deliver the capital required, alongside a set of policies that are aligned across jurisdictions to complement the commitments made by the FMC.

“The objective, ultimately, is to provide some level of confidence that there will be a market so that a project can move ahead. Now the challenge is the speed at which these commitments turn into concrete purchasing of the materials and solutions that are being produced,” he adds.

Nine partner governments – including Germany, India and Japan – have joined the United States to support the coalition

Some of the commitments made at the launch of the coalition last year are already turning into action. Volvo is using green steel from Scandinavia’s SSAB and the Hybrit consortium in the frame of its heavy-duty electric trucks. The first is expected to be delivered to Amazon, another coalition member, by the end of the year.

Another truck-maker, Scania, says its European operation will purchase only fossil-free steel by 2030. It had already invested in Swedish startup H2 Green Steel, which secured 260 million euros in equity and 3.5 billion euros in debt financing in October from a range of public and private sector investors to get its first plant off the ground. It is expected to begin operations in 2024.

In the aviation sector, Delta Air Lines has signed offtake agreements with two U.S.-based companies, DG Fuels and Gevo, as part of its commitment to be fuelling 10% of its operations with sustainable aviation fuel (SAF) by 2030. Both companies have yet to build their first SAF plant but have already sold their planned production capacity. 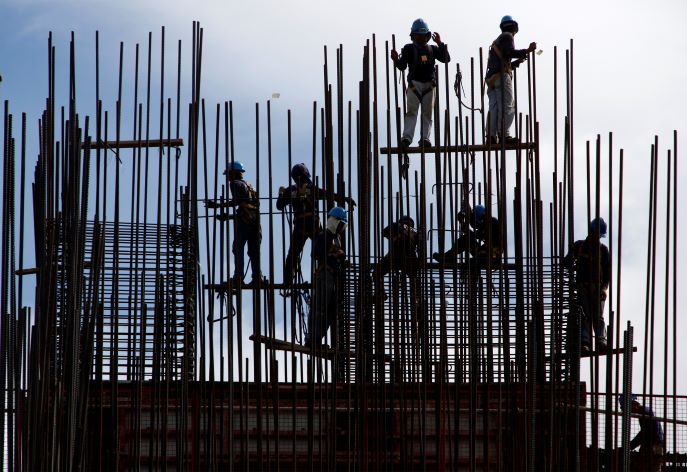 The public sector is responsible for half of all concrete and cement procurement. (Credit: John Javellana/Reuters)

Aker Carbon Capture, a founding member of the FMC, is building the world’s first carbon capture plant on a cement facility, which is expected to be in operation in 2024. The carbon dioxide captured will be transported by ship and permanently stored on the Norwegian continental shelf. Its customer is Heidelberg Materials, another coalition partner.

Apple has bought the first commercial grade aluminium made with carbon-free smelting technology developed by Quebec-based Elysis (a joint venture between Rio Tinto and Alcoa and backed by the governments of Canada and Quebec). Apple is also an investor through its green bonds. Meanwhile Canadian consumers of Corona beer sampled the first cans made with the low carbon aluminium this summer.

Nine partner governments – including Germany, India and Japan – have joined the United States to support the coalition. Discussions are going on both about funding and how the new materials could potentially be incorporated into government procurement goals.

Half of concrete and cement procurement is done by the public sector, so “when it comes to the collaboration between governments and private sector, if there was a joint initiative here, we will really change the cement industry. We want cement in accordance with the First Movers Coalition standard. Then we can change the whole industry,” said Valborg Lundegaard, chief executive of Aker Carbon Capture.

Using the power of public procurement is one of the strands of the Breakthrough Agenda, another initiative launched last year in Glasgow, under which coalitions of countries will set out priority actions to decarbonise power, transport and steel.

“The public sector can play a really important role in improving the risk-return profile of these early-stage decarbonisation technologies, for example by providing concessionary capital or other types of incentives,” says the WEF’s Baraldi. 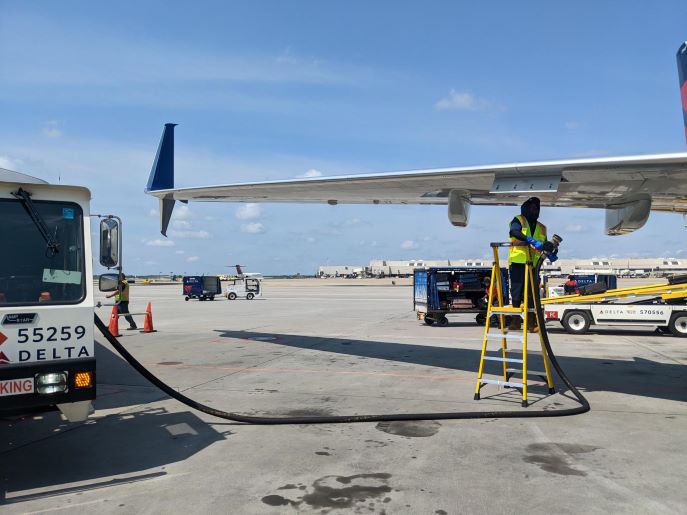 “Once you start to mitigate the (so-called) green premium – as happened with solar energy – then private capital is going to come in. That’s where we are right now, where government has to play a much stronger role in building up momentum and acting as a trigger to investment.”

One such trigger has been the U.S. Inflation Reduction Act – likened by some to a “carrot” compared with the EU’s emissions trading systems “stick”.

Certainly, says Baraldi, it’s a “fantastic builder of momentum, which is going to attract multiple sources of capital towards the U.S. to support certain industries, which are key to the First Movers Coalition. The question now is to ensure that other jurisdictions are going to provide similar types of solutions.”

Hydrogen will both fuel and be carried by ships, but there's a yawning gap between what's required and the production being planned

Indeed, a report from the Tyndall Centre  at Manchester University in the UK, calls for stronger policies (such as price and market guarantees) to encourage investment in the shipping infrastructure needed to support the energy transition. Hydrogen, likely converted to ammonia, will both fuel and be carried by ships, but there’s a yawning gap between what’s required, and the production being planned – let alone financed, the report said.

The sums required are huge: the Breakthrough Agenda estimates that hydrogen deployment consistent with a 1.5 degree aligned pathway will require between $60 billion and $130 billion up until 2030.  Over the past decade just $1 billion has been invested annually.

While initiatives like the FMC aim to create a marketplace for the technologies to decarbonise such hard-to-abate sectors as shipping, those technologies and financial investment must also flow to developing economies. 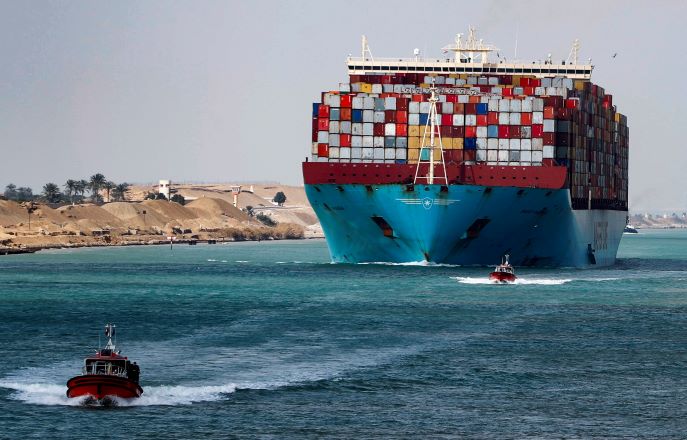 One of the deals signed at COP27 will enable Egypt to develop the country’s first green hydrogen facility in the economic zone of the Suez canal. The European Bank for Reconstruction and Development (EBRD) is providing an $80 million loan to construct the electrolyser facility for the plant, that will eventually produce 15,000 tonnes of green hydrogen a year.

The plant will be owned and built by fertiliser exporter Fertiglobe, Norwegian power producer Scatec, Orascom Construction and the Sovereign Fund of Egypt, a state owned and privately managed fund. It’s a critical project not only in terms of building out renewables, but for food security.

The U.S. International Development Finance Corporation (DFC) is also becoming involved in what will be a $410 million project. Such institutions have a crucial role not only in providing technical assistance, but to share the risk of this first-of-a-kind project, said Terje Pilskog, chief executive of Scatec.

They also “provide attractive financing terms that help us bring down the cost of green hydrogen to a level that’s attractive from a commercial point of view”.

The World Bank is introducing a partnership for hydrogen production in developing countries, including concessional financing that can mobilise further investment from public and private sectors.

More widely, the Climate Investment Funds have announced a multilateral investment programme to help developing countries decarbonise hard-to-abate sectors such as iron and steel, cement and chemicals. It aims to raise at least $500 million to pilot and scale innovations. So far, the UK and Sweden have pledged support.

The question now is how quickly all the money seemingly on the table can make the impact required to justify John Kerry’s optimism.

‘Get the blend right’ and we can unlock trillions i...
ESG Watch: Insurers flex muscles by refusing to finance...
Brand Watch: Things go badly for Coke, as activists att...
Policy Watch:  An unfair COP that will likely fail to ...
comments powered by Disqus