The oceans are inextricably connected to the health of the planet, and of humans: they absorb up to 30% of annual greenhouse gas (GHG) emissions and 90% of excess heat, and over 3 billion people — almost half the global population — depend directly on marine and coastal biodiversity for their livelihoods.

Healthy coastal ecosystems are also critical to the world’s ability to withstand the impact of climate change. Not only do mangrove forests, for example, hold four times the amount of carbon per hectare as tropical forests, according to WWF, their interlocking roots and branches interrupt rising water, protecting people, homes and businesses from powerful storm surges.

Yet they and other critically important marine and coastal ecosystems, such as coral reefs, salt marshes, and seagrasses, are under threat from acidification, changing currents and increasingly severe climate instability, as well as damaging manmade threats from pollution, aquaculture and industrial fishing.

The existing impact funds that are in this space do some amazing work, but they are largely small

Currently, of the 17%  of global waters under national jurisdiction that are designated as marine protected areas, only 6.2%  are closed or limited to extractive or destructive activities, according to the World Resources Institute.

So can the private sector help? There is growing corporate and investor interest in putting money towards marine nature-based solutions, with companies such as Stripe and Shopify invested in ocean carbon removals companies including Vesta, Running Tide and Planetary Technologies. But investment in these so-called “blue economy” ventures is still nascent, with SDG 14, Life Below Water, receiving less than 1% of climate finance, the least of all the sustainable development goals.

According to the United Nations Environmental Programme’s (UNEP) newly released State of Finance for Nature report, investment in marine nature-based solutions is only $980 million, whereas terrestrial protected areas receive almost $23 billion. That deficit is something that Karen Sack, executive director of the Ocean Risk and Resilience Action Alliance (ORRAA), is looking to change. 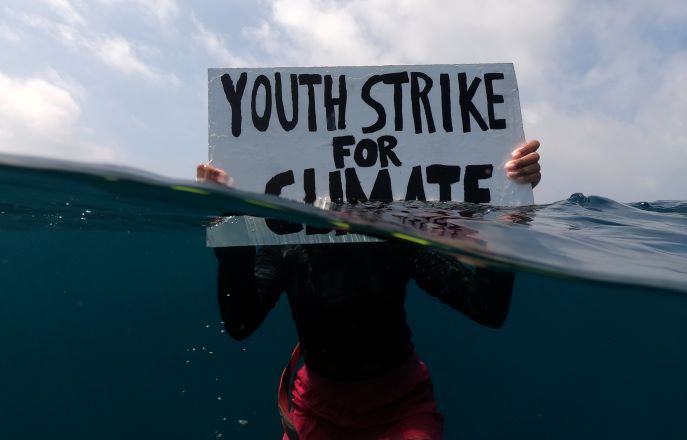 “The existing impact funds that are in this space do some amazing work, but they are largely small,” says Sack. Additionally, “There's this pipeline of projects that aren't seen as investable and the space is also seen as quite risky.”

ORRAA’s mission is to drive investment into ocean and coastal natural capital by building up the ocean financing “ecosystem” and getting the global financial community to work together. “When ORRAA was set up about three years ago, we wanted to build radical collaboration between different sectors that often only work in separate silos,” says Sack, referring to governments, the private sector, finance, insurance and civil society.

ORRAA launched the Sea Change Impact Financing Facility (SCIFF), an organisation that Sack describes as a sort of global convenor for ocean financing. It aims to attract at least $1 billion of private investment into ocean and coastal ecosystems by 2030, while mobilising at least $2.5 billion more of broader capital.

Existing impact funds are very focused on Europe, she says. “They're quite focused on technology, aquaculture and fisheries. … What kind of funds need to be developed to close the gap, particularly to drive investment into small island developing states and least developed countries, and coastal communities? But also, how do we scale existing impact funds so that they can move from being $50-$150 million funds to $300 million, $1 billion?”

Nineteen different community-based associations are part of the mangrove project, and we are directly benefiting around 500 families

Sack emphasises the need for equity and accountability to be built into any ocean investment product, “blue carbon” being one of them. One particular mangrove conservation project in Cispatá Bay, Colombia, is often cited as a good example of what high quality means in this space, where communities as well as carbon are factored in. The project, on Colombia’s Caribbean coast, was the first to measure and monetise the carbon that mangroves sequester in their soil, using methodology developed by non-profit organisation Verra. The forest is expected to sequester nearly 1 million metric tons of CO2 over its 30-year lifespan.

Maria Claudia Diazgranados, Conservation International’s blue carbon director, says: “Nineteen different community-based associations are part of the project … (and) we are directly benefiting around 500 families.” This means, for example, providing families with technical assistance to plant crops that they can sell at local markets, or helping local women bring to market honey produced from bees that feed on the nectar of mangrove flowers. 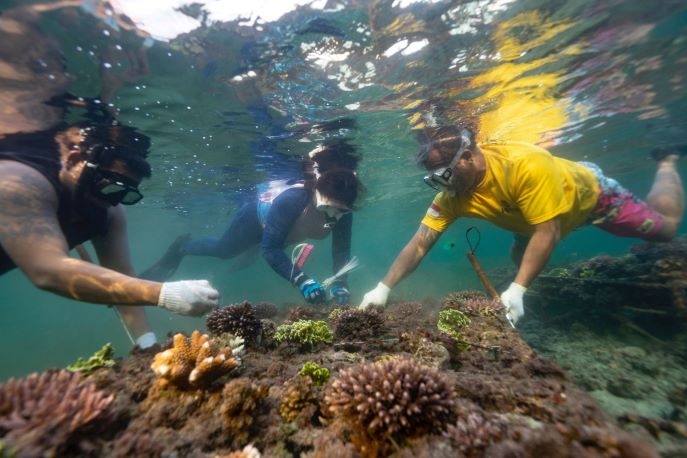 Algae is cleaned from a coral nursery in Bali, Indonesia. (Credit: Nyimas Laula/Reuters)

“Empower people” is one of five principles of the High-Quality Blue Carbon Principles and Guidance, which was launched at COP27. Developed by ORRAA, Conservation International, The Nature Conservancy, technology company Salesforce, and others, the principles seek to provide a framework for those involved in blue carbon credits, including purchasers, investors, suppliers and project developers.

Ted Janulis is founder of Investable Oceans, a U.S.-based investment hub that seeks to simplify and accelerate market-based ocean investing. He says while investing in the ocean has been happening for some time, the type of concerted action we’re seeing today is relatively new, and is accompanied by a new nomenclature.

“Ocean ESG”, for example, which is one of Investable Oceans' focus areas, refers to an increasing number of science-based frameworks that are laying the foundation for rigorous sustainable ocean investing, measuring things such as plastic pollution, fishing practices and decarbonisation strategies.

But a key challenge is materiality.

We know that we don't have a lot of time. But the answers are hidden in plain sight

“Ocean activities are embedded in such a wide array of companies, including really big ones,” says Janulis. “Let’s say you’re evaluating a large company with multiple business lines, and you don’t think they’re moving quickly enough to address an ocean-related issue – but they are addressing other ESG or sustainability issues. Are you going to make your investment decision specifically because of the ocean element? Is that enough of a differentiator?” Perhaps not.

To help companies navigate these waters, new research and platforms are being developed. The UNEP Finance Initiative, has created a roadmap and toolkit to help ensure investment, underwriting and lending aligns to SDG 14. WWF, meanwhile, has developed a model and dataset to assess how financial risks arise in the blue economy. Of the six ocean-based industries they looked at, they found that $8.4 trillion was at risk under  a business-as-usual scenario.

Ports and shipping, for instance, stand to lose $874 billion, due to the fact that shipping emits 1 billion tonnes of CO2 into the atmosphere every year, is heavily destructive of natural ecosystems, and is exposed to physical damage from extreme weather events. 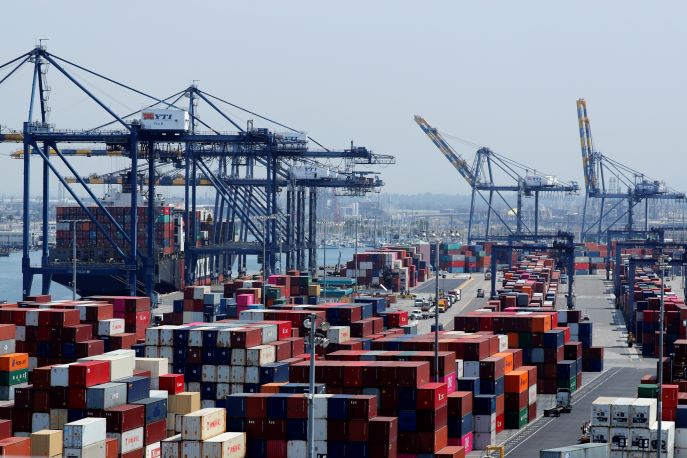 The route between Los Angeles port and Shanghai has been identified as a green shipping corridor. (Credit: MIke Blake/Reuters)

Green shipping corridors, defined by the Global Maritime Forum as “maritime routes between major  port hubs where zero-emission solutions are supported and demonstrated”, are actively being developed after an initiative was launched at COP26 to establish at least six by 2025. A progress report at COP27 identified more than 20 initiatives, including between Shanghai and Los Angeles, a route that carries 40% of all the goods that go between China and the U.S.

Enthusiasm or none, there is a lot of money still to find: $175 billion per year until 2030, in fact. Encouragingly, support for the COP15 goal to protect 30% of land and sea areas by 2030 is already widespread, despite the fact its particularities have yet to be worked out.

“We know that we don't have a lot of time,” says Sack at ORRAA. “(But) the answers are hidden in plain sight, and many of them lie with nature. We don't need to develop new high-tech tools that are going to take 15 years to get there. What we need to do is sit around the table and move quickly, deploy investments, and stop making excuses for inaction.”

Sarah LaBrecque is a freelance writer who splits her time between Ottawa, Canada, and Hertfordshire. She writes about sustainable business and ethical living for publications such as the Guardian, Positive News, and for a range of B2B clients.