For years the nature agenda has taken a back seat to climate for business. As the deepening biodiversity crisis hits bottom lines, companies and investors are trying to catch up. Terry Slavin reports

Negotiators meeting in Montreal this month at crucial talks aimed at reversing global biodiversity loss by 2030 by agreeing a new Convention on Biological Diversity have their work cut out for them.

As Sir Partha Dasgupta’s global review, the Economics of Biodiversity, found, biodiversity has declined by 68% since 1970, and despite the fact that 50% of the global economy depends on a functioning ecosystems, just 0.1% of global GDP is directed towards biodiversity restoration.

A new report from the U.N. Environment Programme (UNEP) finds that finance for nature, which will also be critical in the fight against climate change, will need to ramp up to $384 billion per year by 2025, more than double the current spending of $154 billion, for global climate and biodiversity goals to remain within reach.

Governments currently provide 83% of finance for what is known as nature-based solutions, or NbS, the UNEP report says, but their ability to dramatically increase these flows is limited.  That means the private sector, which only spends $26 billion a year, will have to step up investment by an order of several magnitudes to fill the gap.

But is the private sector up to this enormous task?

Certainly “nature-based solutions” is the latest buzzword in boardrooms, with increasing numbers of corporates pledging to become “nature-positive” and take action to end deforestation in their supply chains as part of their net-zero commitments.

At COP27, more than 35 financial institutions, representing more than $8.9 trillion in assets under management (AUM), launched a Finance Sector Deforestation Action plan, following up on the commitment they made at COP26 to address commodity-driven deforestation impacts in their investment and lending portfolios by 2025. 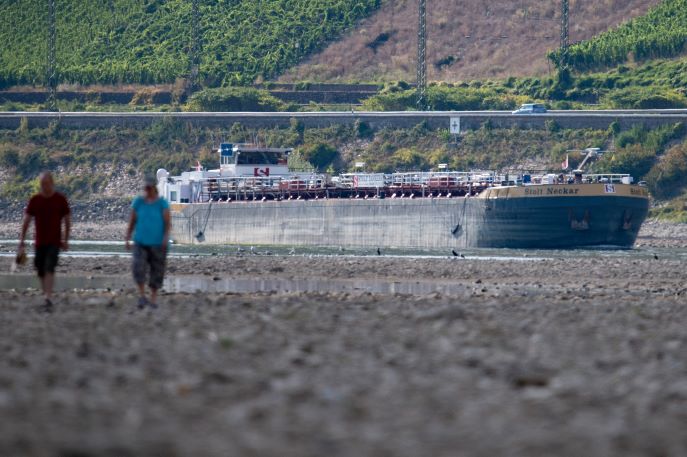 But with the world’s primary forests still being lost at the rate of a football pitch every six seconds, according to WWF, the UNEP report finds little evidence of commitments bearing fruit on the ground, with “too little action and too little capital deployed”.

The problem is that while there is a lot of noise around the nature-positive business agenda, it lags far behind climate on the radars of companies, and the institutions that invest in them.

A review of Fortune Global 500 companies by McKinsey found that while 83% of companies have climate-related targets, only 25% have set targets for freshwater consumption, 20% for addressing chemical and plastic pollution, and 9% to address forest and seabed loss.

There is an attitude of ‘we need to get mitigation over the line, and then we’ll deal with nature’

“While corporate leaders increasingly acknowledge the importance of nature, limited understanding of how to structurally and responsibly engage on the topic of nature degradation prevents many from making quantified commitments,” the McKinsey report said.

Cate Lamb, head of water security at CDP, told a panel discussion at COP27 that the potentially negative consequences of clean energy investments on natural assets such as water had until recently been overlooked at CDP, in the drive to push companies to mitigate their climate impacts. There was an attitude she said of “we need to get mitigation over the line, and then we’ll deal with nature”. 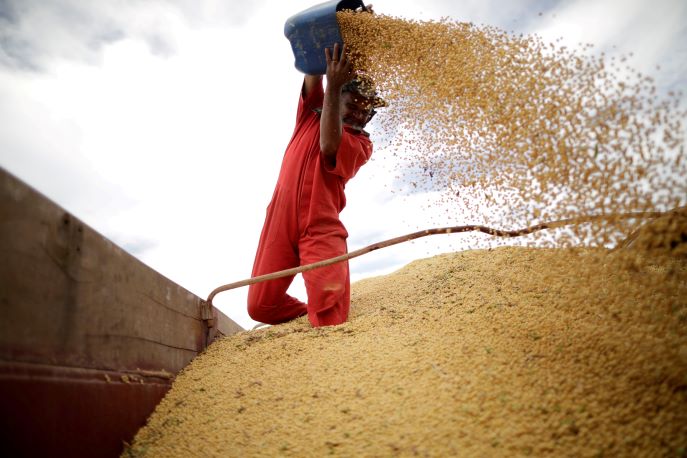 But she said CDP had a wake-up call last year at COP26, when the final text of the Glasgow Climate Pact included explicit recognition of the importance of “ensuring the integrity of all ecosystems, including in forests, the ocean and the cryosphere, and the protection of biodiversity”, reflecting a growing recognition of nature’s critical role in the battle against climate change.

A new report from WWF shows that 59% of the world’s CO2 emissions are absorbed by natural systems, while the agriculture, food and land use sectors alone have the potential to contribute nearly one-third of the emissions reductions needed by 2030 to keep the planet on course for 1.5C of warming.

Lamb said the organisation is looking to make changes to its questionnaires and scoring systems over the coming year, with one scenario that companies won’t be able to get an A score on climate if they aren’t also taking meaningful action on protecting water and forests.

Local context is critical. ‘Where am I operating, is water scarce there or not? Is pollution an issue, or not?‘

CDP is also backing a campaign by the Business For Nature coalition, signed by 330 businesses with more than $1.5 trillion in combined revenues, for world leaders who are meeting at COP15 to make it mandatory for all large businesses and financial institutions to assess and disclose their impacts and dependencies on nature.

Although the TNFD was only launched in October 2021, it has moved at warp speed, developing the framework in a series of iterations, and in collaboration with 16 core knowledge partners and 750 companies and financial institutions. The latter have been road-testing beta versions of the framework since the first was published in March and reporting their findings back to inform refinements for the next. 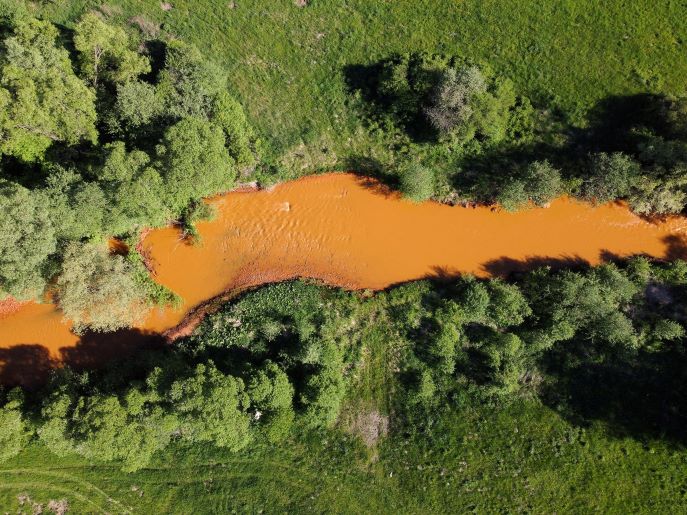 Former Refinitiv chief executive David Craig, who is co-chair of the TNFD, told a session at November's ESG Investment Europe event in London that there have been 100 pilot-tests of the framework, including by companies engaged in soya farming in Brazil and palm oil in Indonesia.

The methodology borrows heavily on TCFD, adapting it for the nature context, but there are several key differences. One is that the concept of “double-materiality” is baked in. So the framework allows companies to assess and report both their nature risks and dependencies, and also their impacts.

Another is that, unlike climate, local context is critical. “Where am I operating, is water scarce there or not? Is pollution an issue, or not?”

And then there is the social context, and the need for companies to engage with stakeholders in the landscapes where they operate: “Ninety per cent of the world’s farms are under a hectare in size … When it comes to impacts on land, you have to think about stewardship and indigenous rights. That’s an important part of the framework.”

The key message is that companies need to be reporting on their impacts on both nature and climate in an integrated manner.

“You have to address both together. If anything, the nature emergency is more pressing than the climate emergency,” he says, because nature-based solutions, like trees and mangroves, are also critical to stop soil erosion, help keep cities cool, and protect coastlines from flooding. 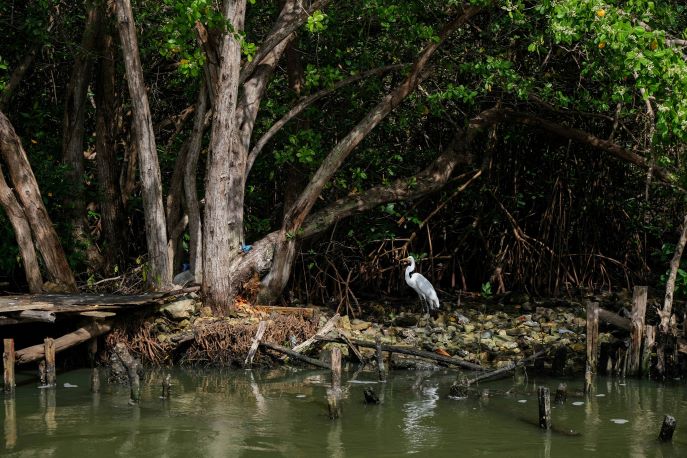 “At the moment we are destroying the very natural assets we need for adaptation. Every forest we cut down, every mangrove swamp we remove, every flood basin we build on in making the adaptation issue harder.”

He points to the impact of last summer’s prolonged drought in Europe, when low river levels forced shipping to ground nearly to a halt and power plants to curtail production. “There are ecosystem services that we have taken for granted for hundreds of years that we are realising, amid scarcity, are more precious than we thought, creating huge risks for our financial systems and economies as a whole.”

This is borne out in the data reported to CDP, with $335 billion in revenue at risk from water insecurity alone in 2020, said Lamb.

“We have evidence in the dataset of stranded assets across oil and gas, mining, and agriculture that are off the balance sheet, because companies have made the flawed assumption that the water that they need would always be there. …. This is material. It isn’t going away, and it will only get worse if companies continue their business-as-usual approaches.”

The TNFD’s framework will be welcome by investors. A survey by Credit Suisse of institutional investors last year found that while 84% of respondents described themselves as “very concerned” about biodiversity loss, fewer than one in 10 had measurable biodiversity-linked targets, and 70% cited lack of available data a key barrier to making investments supporting biodiversity.

Among the investors that are backing the Business for Nature campaign to make reporting on nature mandatory is BNP Paribas Asset Management. “The unravelling of nature is under way and investors need to act now, starting with a better understanding of how our investments impact nature and how nature loss may translate into financial risks, says Jane Ambachtsheer, global head of sustainability. 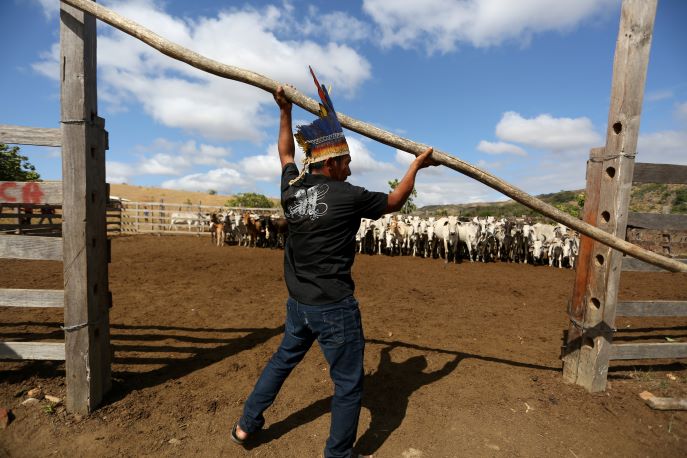 An indigenous leader works with cattle at a community reservation in Brazil. (Credit: Bruno Kelly/Reuters)

“To achieve this, we need better and more consistent disclosure from the private sector... Enhanced disclosures enable us to allocate capital in a way that can help protect our clients from risk, while contributing towards a better future for society and the planet.”

The UNEP report pointed to positive regulatory developments. The European Union has introduced the“do no significant harm” principle as part of its sustainable finance framework to prevent investments that focus on decarbonisation but do not consider other environmental services such as biodiversity.

Similarly, the Network for Greening the Financial System, a grouping of 114 central banks and financial supervisors, has recommended that “biodiversity-positive” and“biodiversity-harmful” activities be defined in green investment taxonomies, and has set up an interdisciplinary consultation process that involves scientists and conservation experts.

It’s a complex, multi-disciplinary problem that requires many parties at the table, all pulling in the same direction

Margaret Kuhlow, finance practice leader at WWF, said in an interview: “The finance sector has awakened to the climate risk and the nature risk and the inter-relations between the two … They realise they have to act, together and with regulators and policymakers, in order to make changes, like making (climate and nature) disclosure more standardised and regularised. … Because when the rules are clear, the money moves.”

She said financial regulators were increasingly interested in the issue, with the Dutch, French, Malaysian and Brazilian authorities all now conducting an analysis of the consequences of nature loss on their economies.

“People laughed when I said this during a panel (at COP27), but I draw hope from central bankers,” she said. “It’s a complex, multi-disciplinary problem that requires many parties at the table, all pulling in the same direction. What the CBD (Convention on Biological Diversity) will hopefully do is show the direction.”

Will 2023 be a watershed moment for corporates on addre...
Can business bridge the yawning gap in finance for natu...
How deforestation risk continues to be blind spot for b...
‘We are sliding from climate crisis to climate disast...
comments powered by Disqus