ESG Watch: Insurers flex muscles by refusing to finance oil and gas ahead of COP27

The industry may be the financial services sector driving the most meaningful climate action at the moment. Mike Scott reports

There has been much focus in recent months on the role of investors and the financial community in fighting – or encouraging – climate change. But one pivotal part of the global financial infrastructure has largely been ignored: the insurance sector.

Insurance’s low profile comes despite its central role in enabling projects to progress; if you can’t get insurance, it is often impossible to secure finance.

“Many people around the world have lived through a summer from hell – facing droughts, floods and heatwaves. The insurance industry is well placed to end this,” says Peter Bosshard, global coordinator of the Insure Our Future campaign, which has just published its annual scorecard on insurers’ fossil fuel exclusion policies.

“Insurance is the Achille’s heel of the fossil fuel industry. Without it, no new fossil fuel projects will go forward, and many existing operations will have to cease,” says Bosshard.

Outside China, new coal power plants have, for all practical purposes, become uninsurable

In the run-up to COP27, it looks like insurers may be the financial services sector driving meaningful action, as banks look to finesse their commitments as part of the Glasgow Financial Alliance for Net Zero (GFANZ) and Race to Zero coalitions.

There has been a steady growth in the number of insurers that refuse to cover coal projects, particularly in the reinsurance sector, where 62% of companies have coal exclusion policies, and for many of the others coal projects are simply outside their area of expertise.

The participation of the reinsurance is important, because there are still a number of smaller insurers – some Lloyd’s of London brokers and firms from heavy coal users such as Vietnam and Indonesia – that would insure coal projects. However, without reinsurance that becomes much more difficult. “Outside China, new coal power plants have, for all practical purposes, become uninsurable,” Bosshard says. 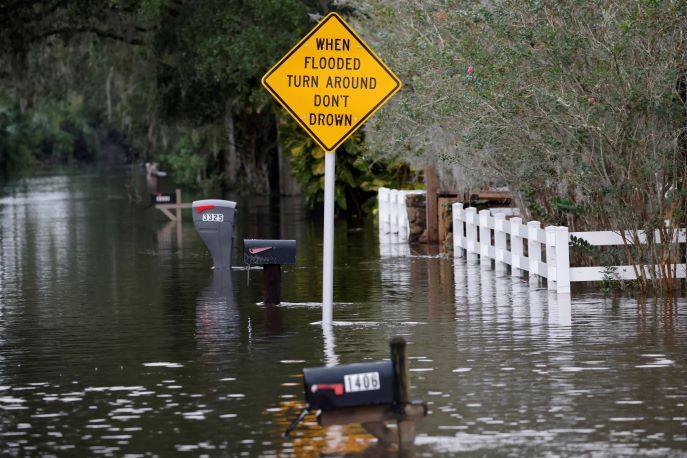 Insurers are far more directly exposed to the impacts of climate change than banks or investors through the claims they have to pay out after extreme weather events, and they have been warning of the risks for more than half a century. But despite progress on coal, until recently there was little momentum on oil and gas.

“Although the science is clear that we need to move away from oil and gas as well as coal, oil – and particularly gas – has still had a social licence that coal no longer has,” Brossard explains. There has been less pressure for firms to move away from oil and gas, which, in addition, provide much bigger revenue streams than coal. But that pressure is now increasing, and there have been recent signs that it is starting to have an impact.

Munich Re, the world’s biggest reinsurer, has announced it will stop insuring oil and gas projects, joining Swiss Re, Hannover Re and Allianz in exiting the sector. By April next year, it will stop covering new projects and by 2025, it will require oil and gas companies with the highest relative and absolute emissions to provide “a credible commitment to net-zero greenhouse gas emissions by 2050, including corresponding short- and mid-term milestones”.

Lloyds Banking Group (no relation to Lloyd’s of London, the insurance market) has become the first UK bank to say that it will no longer directly fund oil and gas companies, except if they want to borrow money for “viable projects into renewable energies and transition technologies”, and if they have credible net zero transition plans in place.

Pressure will grow on the other UK banks to follow suit. The Make My Money Matter initiative is set to launch a campaign calling on the big five UK high street banks – HSBC, Barclays, Santander, Natwest and Lloyds – to stop financing fossil fuel expansion. With Lloyds’ action, it says, there is now a clear direction of travel for this.

Meanwhile, Axis Capital became the first North American reinsurer to say it would not underwrite energy, mining and other projects that do not have the backing of local indigenous communities. Many communities say that their voice is ignored when new projects are planned, even though the United Nations recognised that developers should secure the free, prior and informed consent (FPIC) of impacted communities. 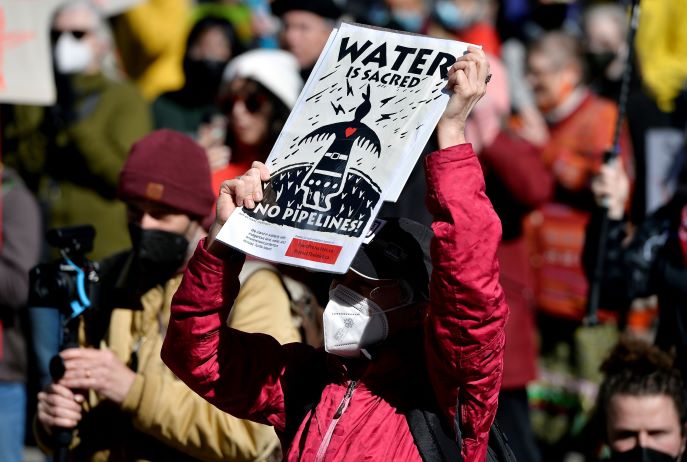 Opponents of the Trans Mountain pipeline expansion at an indigenous-led rally in Vancouver. (Credit: Jennifer Gauthier/Reuters)

Axis joins Swiss Re and Allianz in recognising the importance of FPIC. Supporting FPIC is increasingly seen as a material business issue, following protests against projects such as the Trans Mountain oil pipeline in Canada and the Dakota Access pipeline in the U.S.

And this may be the key to insurers becoming increasingly reluctant to fund oil and gas projects – the business arguments are growing stronger. Societe Generale introduced a “green premium” to insurer valuations, mainly to reflect their efforts to exit coal insurance. It said exiting oil and gas was “the next major ‘green’ goal for the sector and already in their sights. We feel momentum is starting to gather in this area.”

Today, most of the major European insurers and reinsurers won’t insure new coal projects and they have a clear roadmap to fully exit coal, SocGen says. “Consequently, coal companies are finding it more difficult and expensive to find insurance, with many reportedly facing rate increases of as much as 40%.

“We think that as they now begin starting to reduce insurance cover to the oil and gas industry, insurers will also have as important an impact as they are having on coal.”
Insurance may be low-profile, but it will be an essential part of the low-carbon transition. And while insurers can have significant influence through their huge investment portfolios, their biggest impact could come through what projects they will underwrite.

This article is part of the November 2022 issue of the Sustainable Business Review. See also:

Policy Watch: An unfair COP that will likely fail to deliver for Africa
Brand Watch: Things go badly for Coca-Cola as activists attack COP27 sponsor
Society Watch: Indigenous peoples fear being overshadowed after COP26 moment in the sun
In conversation with Elizabeth Mrema, the woman seeking a ‘Paris moment’ for nature at COP15
Brands failed to meet promises to protect forests. We can’t mess up net-zero, says Nestle ESG chief

Can business bridge the yawning gap in finance for natu...
Pact to decarbonise heavy industry through corporate pu...
How deforestation risk continues to be blind spot for b...
‘Get the blend right’ and we can unlock trillions i...
comments powered by Disqus