There is a lot resting on the diminutive shoulders of Elizabeth Maruma Mrema. The Tanzanian lawyer, chief executive of the Convention on Biological Diversity, will be leading efforts to strike an historic agreement to protect nature at the COP15 biodiversity summit in Montreal in December.

As if that is not enough, she is also co-chair of the Taskforce on Nature-related Financial Disclosures (TNFD), with a goal of creating a framework for companies and investors to report on their nature-related risks: both the impact they have on nature, and their dependencies on nature to conduct their businesses.

Having only been struck in 2021, she and her co-chair, former Refinitiv founder David Craig, are proceeding at warp speed, aiming to produce a workable version of the TNFD by September next year.

The taskforce is 200% effort, but it gave me a better understanding about the operations of the business community

The timetable has been pushed to come just months after what is hoped to be a “Paris moment” for nature at COP15, a reference to the 2015 Paris climate agreement, with 196 countries signing off the Convention on Biological Diversity’s post-2020 global biodiversity framework (GBF).

But after pre-COP15 negotiations in Nairobi in June ended with only two of the 21 targets in the GBF intact, NGOs warned that it could as easily become a “Copenhagen moment”, the 2009 climate talks that ended with no agreement.

Asked in an interview with Ethical Corporation whether she regretted saying “yes” to the TNFD job, given the heavy demands of her U.N, role, Mrema said: “I don’t regret it, although it’s too much work – the (biodiversity) convention is 200% (effort), the taskforce is 200% – but it gave me a better understanding about the operations of the business community. ... That’s been a positive gain for me.” 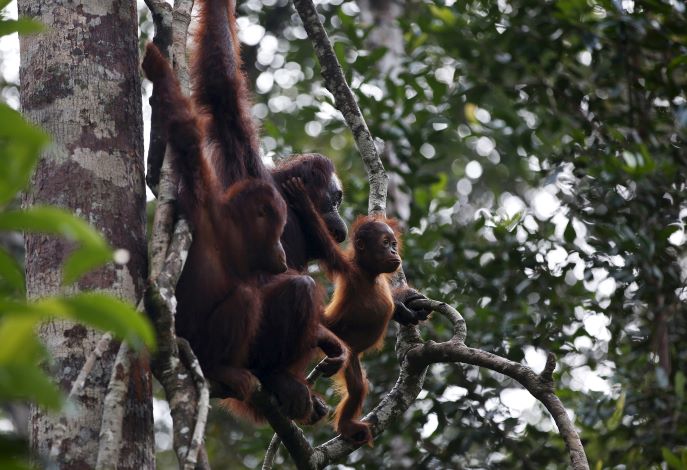 An orangutan and her young in Indonesia, deforestation is the species' primary threat. (Credit: Darren Whiteside/Reuters)

While belated, she says, there’s a growing awareness in business of the risks of not protecting nature, she says. She points out that more than 50% of the global economy depends directly on nature and the ecosystems it provides. “Without doing so, it’s their businesses that will be affected. They have an interest. If they want to maximise profit, then they have to take care of nature.”

The cost of failure was highlighted again in the latest Living Planet report from WWF, which reported that global wildlife populations have plummeted by 69% on average since 1970.

Another report out this week, the Forest Declaration Assessment, finds that a year on from the Glasgow Leaders Declaration aiming to halt and reverse forest loss and land degradation by 2030, not a single global indicator is on track, and funding to protect and restore forests must increase 200-fold to meet the goals.

Yet business engaging positively with nature could help tackle both biodiversity loss and climate change, she argues. By 2030, nature-based solutions could contribute more than a third of the cost-effective cuts in greenhouse gas emissions.

While the political negotiations will be fraught in December, Mrema expects her TNFD work to pay off, with several targets directly related to business, particularly Target 15, which will ask large business and financial institutions to assess and disclose their impacts and dependencies on nature by 2030.

While more than 18,600 companies disclosed climate change impact data voluntarily through the disclosure platform CDP in the past year (up 42%) the gap is widening in voluntary reporting on nature-related impacts, with just over 1,000 companies reporting data on forests (up 20.5%), and 4,000 firms disclosing on water-security risks (up 16%).

The Business for Nature coalition this week announced 330 companies have signed a statement urging governments to strengthen the draft text of Target 15 by making it mandatory.

“Currently, businesses and financial institutions don’t have the political certainty they need to change their business models,” the Business for Nature statement reads. “And governments don’t have the information they need to enforce these changes and track progress. Assessment and disclosure are an essential first step to generate action, but it will only have an impact if it is made mandatory.” 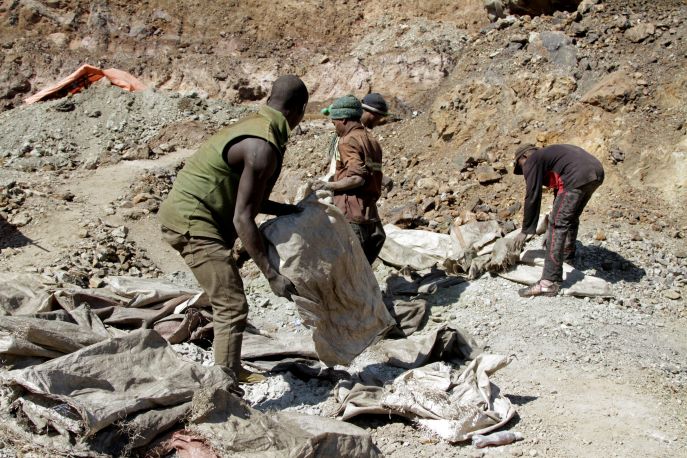 Artisanal miners work at a copper-cobalt mine in the DRC. (Credit: Kenny Katombe/Reuters)

Although the TNFD isn’t pushing for adoption of its guidelines to be made mandatory, “that shows the ownership of this agenda that business is taking,” says Mrema. “To me, this is business coming on board.”

Mrema will need all the support she can get in December. As with the U.N. climate negotiations, consensus with all 196 signatories of the 21 targets must be reached.  While Target 15  stands a fair chance of getting passed, whether mandatory or not, other business-related targets face a far harder ride in Montreal: Target 19, seeking to boost financial flows from global north to south, and Target 18, which aims to “redirect, repurpose, reform or eliminate incentives harmful for biodiversity, in a just and equitable way, reducing them by at least US$500bn per year, including all of the most harmful subsidies, and ensure that incentives, including public and private economic and regulatory incentives, are either positive or neutral for biodiversity.”

Mrema says: “We know that every year $4-6 trillion is spent on harmful subsidies, for fossil fuels and food systems. Can you imagine if this was repurposed for biodiversity-positive activities, how much resources would be there for implementation of the framework?”

Yet Target 18 is one of the most controversial. After the Nairobi talks, WWF director-general Marco Lambertini accused Brazil in particular of “consistently blocking progress”, adding that negotiators would need “a step-change in political will, attention and ambition” to turn the divided text into an agreement in Montreal.

In our interview, Mrema was more measured in her assessment, saying that both Brazil and Argentina had constructively engaged in technical negotiations. “But who knows what will happen when it comes to political decisions at the end …. The negotiators still have a lot of work to do in December” to resolve the 1,800 brackets in the draft text.

“Many people are looking for a ‘Paris moment’ for biodiversity in Montreal, but that moment will only happen if governments will be able to adopt a really actionable, implementable, simple, flexible framework currently being negotiated,” she said. “We don’t want to end up with a framework which, for the next three years we are asking: what were the negotiators trying to achieve here? That will only delay action.”

Delay is also what she and David Craig are seeking to avoid in their approach to developing the TNFDs. There is no government representative among the 34 members of the TNFD taskforce, just financial institutions and corporates, and its risk assessment framework is being developed in a series of iterations, the first of which came out in March. “It’s an agreement by the business community and for the business community,” she says. 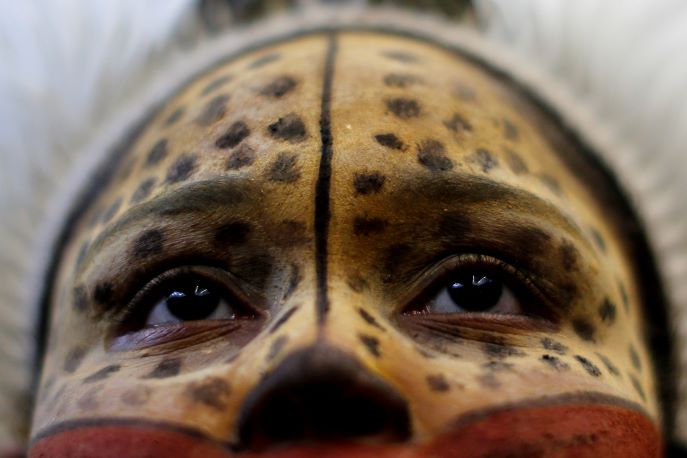 An indigenous protestor at a meeting with Brazilian parliament members over land rights (Credit: Adriano Machado/Reuters)

The 650 companies and financial institutions in the TNFD Forum have been invited to road-test each iteration, and report their findings back so that refinements can be made in the next. A third is due out in November, a fourth in February before the final framework is released in September.

“We studied the TCFD (Taskforce on Climate-related Financial Disclosures) recommendations, taking them fully into account (in the TNFD framework). The idea was not to burden companies with too much reporting because we would immediately have got pushback from those that are already struggling” to report on their climate impacts, Mrema says.

Still, reporting on nature is complex because there is a lack of a single metric or target, such as CO2 equivalent and keeping global warming to within 1.5 degrees Celsius. And while the Earth’s atmosphere is affected by CO2 emissions regardless of where they happen, with  biodiversity impacts, location is key.

As difficult as the exercise might prove, it’s critical for companies to get the full picture of both their climate and nature risks, to equip them to minimise the trade-offs that will be required. It’s a hard reality that some economic activity critical for the energy transition, such as wind farms and mining, will take a heavy toll on natural ecosystems, and on the communities that inhabit them.

In particular, the rights of indigenous people, who protect 80% of the world’s remaining biodiversity, (read more) need to be safeguarded, she says, adding that the COP15 process has gone to great lengths to facilitate meaningful contributions of indigenous people, women and youth, to the negotiations, including paying for them to attend.

This month more than 200 organisations signed an open letter calling on the COP27 secretariat to put human rights, and particularly those of indigenous people, at the centre of climate action, arguing that the energy transition “will be set up to fail if it focuses solely on being fast, and not on also being just”. Conflicts over land rights related to renewable energy projects have already resulted in 369 attacks on indigenous communities since 2015, according to a new report from the Business & Human Rights Resource Centre.

That also means not treating nature as a “silver bullet” to offset companies’ CO2 emissions, she says. “We need a genuine global energy transition.”

Will 2023 be a watershed moment for corporates on addre...
Can business bridge the yawning gap in finance for natu...
Calls grow for companies to disclose nature impacts in ...
Why indigenous peoples are key to ensuring EV revoluti...
comments powered by Disqus