Companies that want to credibly lead on tackling climate change have to take their customers – and governments – with them. Nadine Hawa reports

One of the big challenges for companies that set science-based emissions reductions targets is the need to engage consumers in the climate change battle, given that use and disposal of products, known as scope 3 emissions, typically account for 80% of the total global carbon footprint.

One silver lining from this year’s pandemic is consumers’ resolve to seek sustainable living. While this isn’t a new trend, Covid-19 seems to have accelerated and reinforced consumers’ determination to reach for more conscious brands.

A GlobeScan study, conducted amid the pandemic, revealed that consumers want to make sustainable choices, but need guidance and affordable solutions from companies. It also found that even though Covid-19 has made health issues top of mind, consumer concern about the environment and climate change have not faltered.

So how do companies communicate with consumers in a way that is engaging and, ideally, spurs sustainable consumption habits?

At German chemical and consumer goods company Henkel, 50% of its €20bn business is consumer-facing, with brands including Persil, Schwarzkopf hair care and Right Guard antiperspirants.

Laundry, travel, heating and showering are common areas consumers can monitor and improve

In March this year, the Dusseldorf company set a new sustainability target of becoming “climate-positive” by 2040. Along with cutting the carbon footprint of its production by 65% by 2025, it also intends to leverage its brands to help customers, consumers and suppliers save 100m tons of CO2 by 2025 (compared with 2015).

In a session at Reuters Events’ virtual Responsible Business Summit Europe in October, Thomas Mueller-Kirschbaum, senior vice president for innovation and sustainability at Henkel, explained that the company encourages consumers to use a footprint calculator.

The tool shows customers where their biggest CO2 emissions occur in everyday life. “Using the washing machine, how far they travel, household heating and showering, are common areas consumers can monitor and improve,” says Mueller-Kirschbaum. “We show consumers what their impact would be if they not only tweak the water temperature, but also cut shower time from eight to four minutes. They would reduce their CO2 footprint by half.” 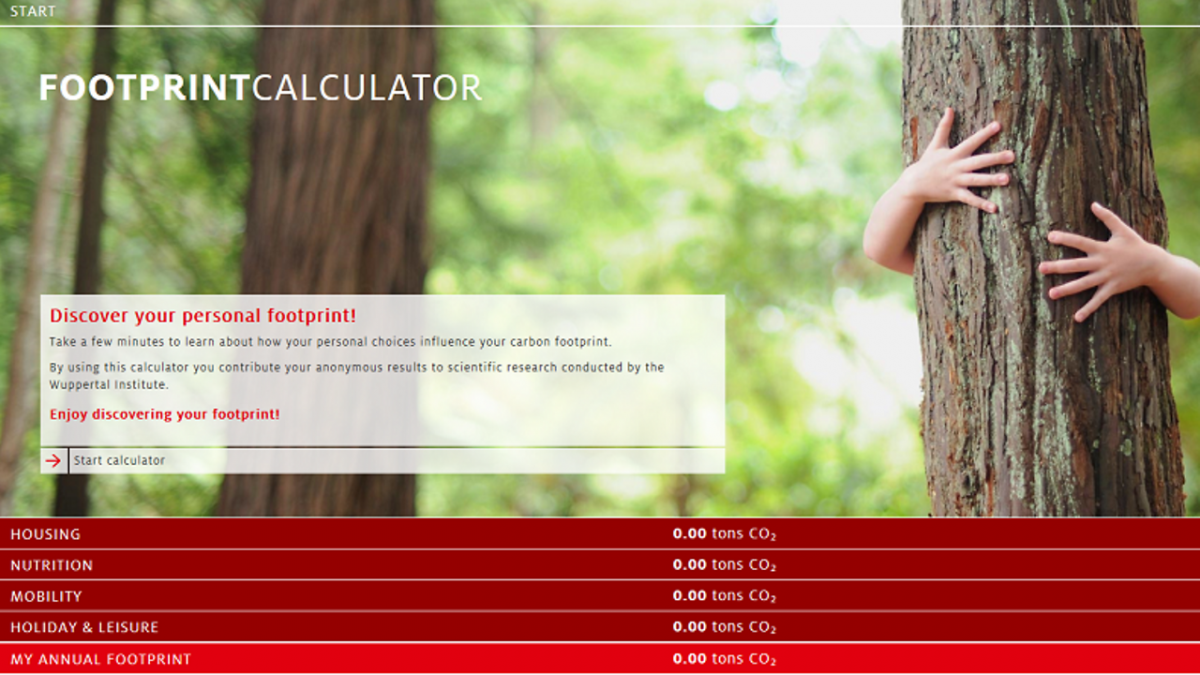 Henkel has created a footprint calculator to help consumers see where their CO2 emissions are. (Credit: Henkel)

The footprint calculator also incentivises efficient behaviour by highlighting the opportunities to save money, he adds.

A report from the Science Based Targets Initiative (SBTi) encourages brands to facilitate energy-efficient behaviour change with advertising campaigns and on-pack instructions such as lower-temperature wash cycles. But information must be visible, relevant, accessible and comprehensive enough to help consumers make an informed decision.

When it comes to consumer action, reducing plastic waste is one area where companies are getting a lot of purchase.

Valentina Cavallaro is in charge of sustainability at L’Occitane UK & Ireland, a signatory of the Ellen MacArthur Foundation’s New Plastics Economy commitment, with an ambitious target of closing the loop on plastic waste by 2025.

Cavallaro says L’Occitane uses every opportunity to nudge consumers in the right direction. “Whether it be purchasing our refill pouches to reduce single-use plastic consumption, bringing empty products from any brand back in store for us to recycle, or opting for a reusable drawstring bag instead of a gift box.”

Cavallaro says sales of refills, which consume close to 90% less plastic than bottles, have been steadily increasing, but particularly in the last couple of years. She said refills made up a 24% share of its top-20 products in 2020, 152% higher than last year.

Mueller-Kirschbaum agrees that plastic waste is the highest area of consumer interest.

“We use social plastic from our partnership with Plastic Bank, such as plastic material picked up in Haiti or Indonesia and soon from the banks of the river Nile in Egypt, and we use it as an added recycled plastic in our bottles. We communicate this directly on the front of the product. And from that, we see a huge response.” 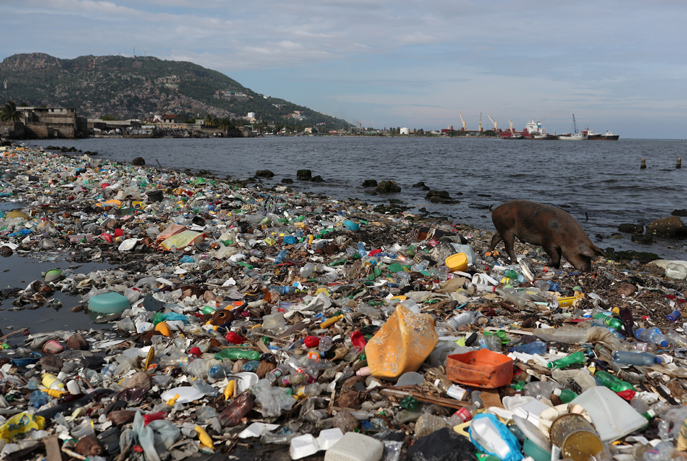 Henkel is using plastic material picked up from countries such as Haiti. (Credit: Ricardo Rojas/Reuters)

But there is still a long way to go to tackle the environmental impact of plastic waste. A study this year by Consumers International, UNEP, and the One Planet Network showed that only 19% of labels give consumers quality information to make informed recycling and purchasing decisions – a critical issue given that only 9% of plastic waste generated has ever been recycled, and another 12% has been incinerated.

Recycling soft plastics such as in candy wrappers and cat food pouches is particularly problematic, as they can’t go into conventional plastics recycling bins.

New technologies, however, are emerging to tackle the problem by converting oil from soft plastics into plastic pellets. In September, the UK’s biggest supermarket, Tesco, announced that after a pilot project putting recycling collection points into 10 stores, soft plastic waste collected from customers had been converted into food grade packaging. Tesco in 2019 announced stretching recycling goals as part of of its Remove, Reduce, Reuse and Recycle plan.

In Australia, Nestlé has partnered with recycler iQRenew in a kerb-side collection and recycling scheme for soft plastics. It has also launched a campaign to encourage and educate its consumers to “Give the Planet a Break” by recycling soft plastics correctly, temporarily replacing the logo on the iconic four-finger milk chocolate bar with a KitKat-inspired recycling symbol.

“We want to communicate openly and honestly with consumers in a way that is relevant to them,” says Lisa Gibby, global corporate communications director at Nestlé. "That is one of the reasons why we are trying to be more personalised in our approach to consumer engagement, but also communicate sustainability goals via our brands.”

Another complex issue to communicate on is palm oil, which continues to be the subject of consumer boycotts despite the fact that sustainably produced palm oil is considered by environmental NGOs to be the best option for the planet, due to the land-intensiveness of alternatives. 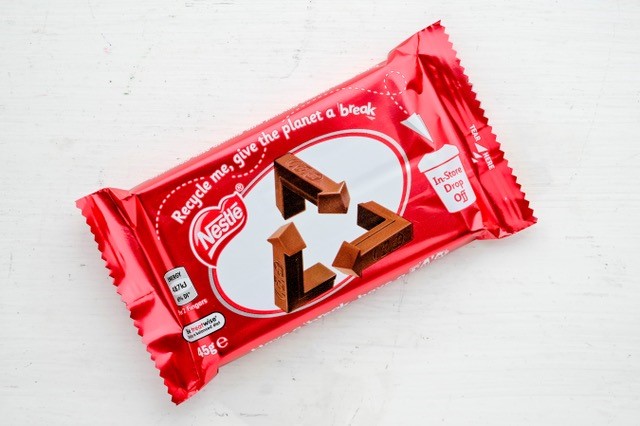 Mueller-Kirschbaum of Henkel says it educates customers about its use of certified sustainable palm oil through numerous channels. “The product label itself is a starting point, we also offer extensive information on our websites to provide transparency, give background and explain our actions and ambitions. And we also educate and engage on these topics via our social media channels.”

Henkel is working with Dutch NGO Solidaridad Network to advance smallholders in the right direction, helping increase plantation yields, and incomes, while progressing their plantations from regular palm oil to sustainable palm oil.

Growing use of blockchain technologies is also helping companies share provenance with consumers, improving transparency and increasing traceability, in some cases all the way up to the mill.

Nestlé is focused on using our scale to make affordable, healthy and sustainable products across our product range

“The most important point is to have a clear target, that you increase the proportion of sustainable palm oil in your products, and that you report on that,” says Mueller-Kirschbaum. “Right now, we’ve reached more than 90% [of RSPO-certified palm oil] and want to achieve 100% in the next months,” he adds.

When it comes to affecting purchase decisions, affordability is key, particularly during more thrifty Covid times.

While some consumers may be willing and able to pay a green premium for an environmentally friendly product, the GlobeScan study, spanning 27 markets and 27,000 respondents, found that the number one action people want from companies is to make sustainable products affordable.

“Nestlé is focused on using our scale to make affordable, healthy and sustainable products across our product range,” says Gibby, giving an example from south-east Africa. 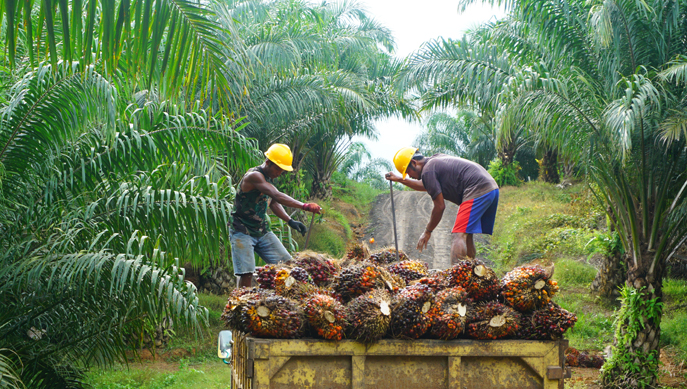 In July, the company introduced Nestlé Cerevita, an instant sour porridge made from wholegrain cereals and fortified with key micronutrients, which costs about 25% less than similar products in local markets. “It’s not a big or flashy launch, but it is providing a nutritious, affordable and sustainably/locally sourced staple in Zimbabwe and soon to other countries in the region,” Gibby adds.

Cavallaro of L’Occitane UK & Ireland believes the pandemic has left consumers more concerned about giving their money to brands they feel share their values and are authentic, says. “2020 has been the year where consumers’ focus has shifted. They no longer just care about what products you sell, but also what you stand for as a brand and what you put in your product,” she says.

But companies risk losing that hard-won consumer trust if they speaking with forked tongues: communicating values and purpose to their customers, while behind the scenes lobbying against progressive regulation that might affect their operations.

In 2017, Sky News published a document showing that Coca-Cola Great Britain, a leading member of the UK Plastic Pact collaboration to end plastic waste, had been lobbying against the introduction of a deposit-return scheme for bottles in Scotland, forcing the company into a U-turn on the issue.

Moving governments to where you need them to be, is part of the business’s responsibility once it sets a science-based target

Kevin Moss, global director of the World Resources Institute’s Center for Sustainable Business, says companies that have set a science-based climate target have to show leadership through branding, marketing and advertising, while lobbying governments for better regulation.

Car companies, for example, should be lobbying governments for stricter vehicle emissions standards, as well devoting marketing spend to their electric vehicle ranges.

That also means steering clear of membership of trade associations that are lobbying for regressive climate policies. Ross points out that 29 of the nearly 200 CEOs who signed the Business Roundtable statement on purpose in 2019 are members of the US Chamber of Commerce, which scored an E- (on a scale of A-F) from InfluenceMap in 2018 for its stance on climate and energy policy.

Moss said that unlike the Business Roundtable, which supports the goals of the Paris Agreement, the US Chamber of Commerce doesn’t support the goals, although it does support the US rejoining the accord.

Nadine Hawa is a former CNBC business news presenter and producer. She has also been a sustainability consultant, working on projects with organisations including the UNEP and RSPO. She has been a regular contributor to The Ethical Corporation magazine since 2012.

Will 2023 be a watershed moment for corporates on addre...
Energy crisis boosts drive to cut emissions from buildi...
Brands failed to meet promises to protect forests. We c...
PepsiCo’s biggest challenge: winning over millions of...
comments powered by Disqus