US onshore wind prices are rising on inflation and delays to projects and the impact on profits could widen from suppliers to developers. 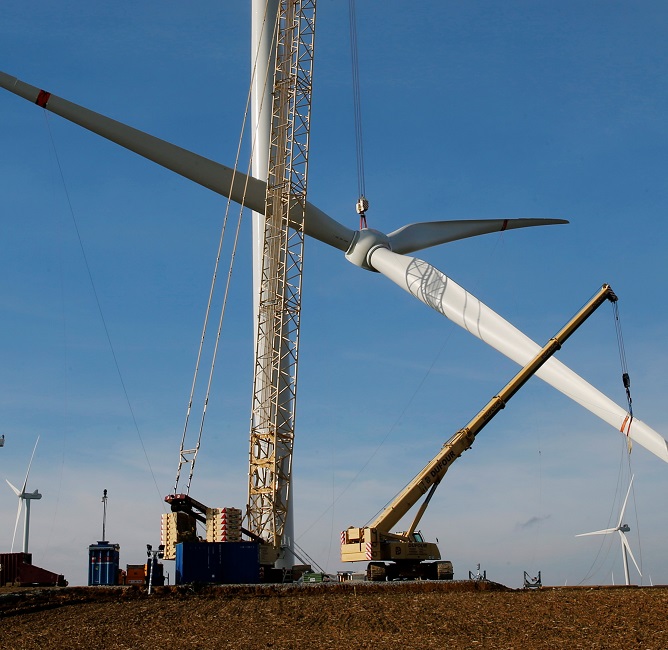 US wind installations are expected to fall before stimulus planned by the Biden administration can take effect. (Image: REUTERS/Pascal Rosignol)

A drop in US wind installations in the third quarter signalled inflationary pressures and supply chain disruptions are starting to curb growth.

Onshore installations in July-September fell 22% on a year ago to 1.5 GW as some developers delayed projects, data from the American Clean Power (ACP) association showed. Annual installations are expected to be in-line with 2020, boosted by higher activity in the first half as projects spilled over into 2021, but a slowdown is expected next year.

“Continued supply chain constraints, rising commodity prices, and the current phase-out of the production tax credit (PTC) are expected to result in a slowdown in installations in 2022 and 2023," John Hensley, VP of research and analytics at ACP, told Reuters Events.

A drop in installations will push the US further behind President Biden's target to decarbonise the power sector by 2035. Annual wind installations must quadruple by the end of the decade to meet Biden's goals and his $1.75 trillion Build Back Better package, to be debated by the Senate this month, includes measures that would increase demand for projects.

“To mitigate these risks, developers are increasing power purchase agreement [PPA] prices,” Rob Collier, Vice President of Developer Solutions at pricing platform LevelTen Energy, said. Following years of prices decreases, US wind PPA prices in Q3 rose by around 20% on a year ago, based on LevelTen’s index. Data indicates that prices will continue to rise in the near term, Collier said.

"Long interconnection queues and permitting challenges -- issues that will take longer than a few quarters to resolve -- are also putting a lot of upward pressure on prices,” he said.

For years, wind partners have used advances in technology and operational learnings to improve the competitiveness of wind power. Intense price competition dented the margins of turbine suppliers, consolidating the market to a handful of suppliers.

Since the pandemic, suppliers and developers have been impacted by rapid rises in the cost of steel and other commodities along with transport disruptions as economies rebound from covid restrictions. Steel prices have risen to levels not seen since 2008 and prices for other materials used in turbines such as carbon fibre, copper and resin have also increased.

Vestas has not cancelled any projects yet but there have been several delays, Chief Financial Officer Marika Fredriksson told Reuters.

“The prices are something I don't think anyone has experienced previously and it’s a very, very tough environment,” Fredriksson said.

GE Renewable Energy posted a Q3 loss of $151 million, compared with $51 million a year ago, as supply disruptions and declining PTC rates reduced its margins.

Siemens Gamesa, the largest supplier of offshore wind turbines, reported a loss of 627 million euros for the full year to September.

Sharp rises in commodity prices, shortages of components, logistics bottlenecks and high transportation costs impacted its operations, particularly in the second half of the financial year, the company said.

These challenges will further impact operations in the coming year, Siemens Gamesa said.

“We are operating in a very difficult environment with challenging short-term market dynamics and low visibility on supply chain normalization, and we will continue our efforts to return the company to sustainable profitability," Andreas Nauen, CEO of Siemens Gamesa, said.

Developers take on pricing risk for steel and other commodities but Mads Nipper, CEO of Orsted, said it will only be significantly affected if inflation is sustained for “significantly longer periods."

The costs for Orsted’s two offshore projects currently under construction, Hornsea 2 in the UK and Greater Changhua 1 and 2a in Taiwan, “are fully locked with very, very limited if any impact of the recent price surges on commodities," Nipper said at Orsted’s Q3 results.

Costs for projects further out are less certain and large developers actively hedge commodity price risk in the market. By November 3, Orsted had locked in 70% of the steel exposure on its US projects including Ocean Wind 1 in New Jersey, Nipper said. Ocean Wind 1 is due online by the end of 2024 and has a two-year installation timeline.

A key question remains whether inflation will continue beyond 2022.

Developers have a certain amount of flexibility to lock in prices for future projects when they see fit, but “really long-term sustained inflation" would significantly impact costs, Nipper said.

"...in that case, it will impact all developers and...the bid prices that we will all come out with will change," he said.