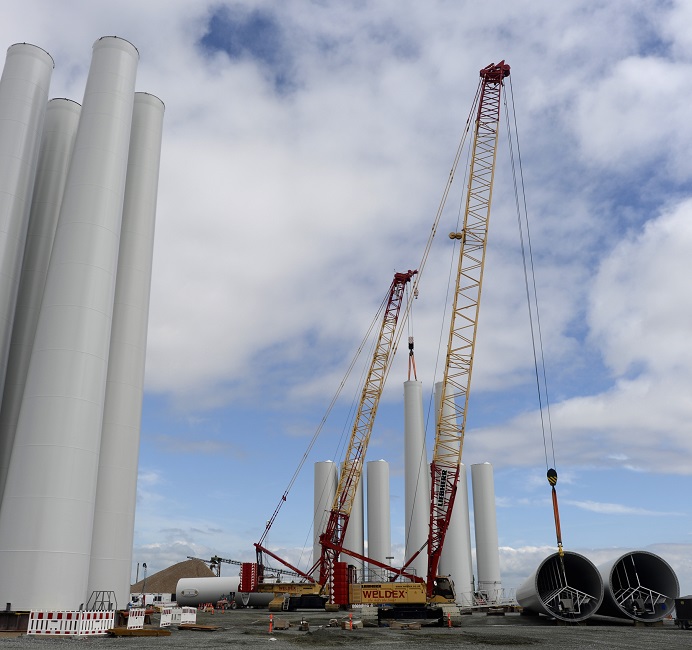 In March, the UK government designated AMEP and the Teesworks park in Teeside as offshore wind freeports - zones that offer tax breaks and tariff exemptions to entice investors. The government will invest 95 million pounds in the two sites, which could together host up to seven manufacturers and create 6,000 jobs, it said. US turbine supplier GE Renewable Energy immediately announced it would build a blade factory at Teesworks by 2023 and Korean steel group SeAH confirmed in July it will build the UK's first manufacturing facility for monopile offshore wind foundations at AMEP.

The freeports form part of the government’s plan to install 40 GW of offshore wind power by 2030 - up from 10 GW in 2020 - and expand the UK manufacturing base. Offshore wind costs have plummeted in recent years as developers install larger, higher efficiency turbines and leverage deployment learnings and economies of scale. The last UK auction for contract for difference (CFD) subsidies in 2019 awarded 5.5 GW of new offshore wind projects at strike prices of between 39.65 and 41.61 pounds/MWh, some 30% lower than prices awarded in 2017.

After such a drop in prices, the UK's next CFD tender - due to be held in December - will be keenly watched.

Suppliers currently face strong inflationary pressures following the Covid pandemic but the freeports will bring new capabilities and efficiency savings that will put further downward pressure on offshore wind costs and boost the outlook for the sector, industry experts said.

"Costs could continue to fall, but not as precipitously as they have," Andrew Elmes, Head of Business Development, UK & Ireland at Siemens Gamesa told Reuters Events.

"For every turbine manufactured, installed and maintained we are getting many more MW of electricity for those discreet costs; it’s an economy of scale," he said.

Turbine supply is dominated by just a few companies but the new Tier 1 facilities in the UK will increase competition in the offshore wind sector, a spokesperson for utility SSE Renewables said.

SSE Renewables and project partners Equinor and Eni have agreed to source GE wind turbines from its new factory in Teesworks for their giant 3.6 GW Dogger Bank wind farm in the UK North Sea.

The freeport investments will bring "additional capacity and capability" into the UK offshore wind sector, such as deep-water facilities that are suitable for integrated offshore wind pre-assembly, Benj Sykes, Head of Market Development, Consenting and External Affairs at Orsted, said. Orsted is the world's largest offshore wind developer and its Grimsby East Coast operations and maintenance (O&M) hub lies adjacent to the Humber freeport zone created in March.

The new port facilities will help to create a "competitive and sustainable supply chain,” Sykes said.

The clustering of suppliers will increase the economies of scale available to developers, Neil Etherington, Group Development Director at Able UK, said.

The logistics savings alone from the clustering of suppliers can equate to 2 to 3% of turbine sales value, when compared with a distributed supply chain, according to research by BVG Associates cited by Able UK.

Some turbine parts will continue to be manufactured overseas but Siemens Gamesa wants to attract "more ports, logistics operators, vessel providers and manufacturers" into the UK," Elmes said.

"One major focus at the moment is to try to establish a UK tower manufacturer...these are one of the major wind turbine components,” he said. “But in addition there are suppliers of steel, castings, electrical components and even cables which are all contributory to the wind turbine supply chain."

Intense competition in the offshore wind market has dented the margins of turbine suppliers and the benefits of freeports offer some relief to manufacturers.

Freeport status allows companies to import goods without paying tariffs, process them into a final product and then either export them or pay a tariff to sell them into the domestic market. In addition, tax relief is offered on land purchases and building and machinery costs. Businesses are also exempt from rates for up to five years and benefit from reduced National Insurance (NI) contributions for employers.

Siemens Gamesa will double the area of its offshore blade factory to 77,600 square meters, allowing it to manufacture its larger, next generation blades. The company will hire 200 staff to supplement the 1,000 person-workforce already in place. The investments include grants from the UK's 160 million Offshore Wind Manufacturing Investment Support scheme, launched by the government in November as part of a "Ten Point Plan for a Green Industrial Revolution."

The freeport support measures improve the long-term business case for investing in the UK, "either in the initial outlay for leases, buildings and plant; or longer-term operational costs in staff and transactional costs," Elmes said.

For now, the majority of the turbines manufactured at the Siemens Gamesa factory in Hull will be delivered to domestic projects, Elmes said, but the new ports and industrial clusters will also increase the competitiveness of exports.

Europe is the leading offshore wind market but suppliers are having to make strategic global investments as offshore wind growth spreads into new markets, Elmes noted.

"With developments underway in Asia and the Americas as well, OEMs and developers need to look at the overall market cost base and optimum siting of future factories," he said. “This trend will only accelerate as floating offshore wind farms open up more markets and present new logistical challenges to preparing and building wind farms."