Specially designed UK ports with tax benefits will handle growing turbine dimensions and could soon widen the UK's component base to monopile foundations. 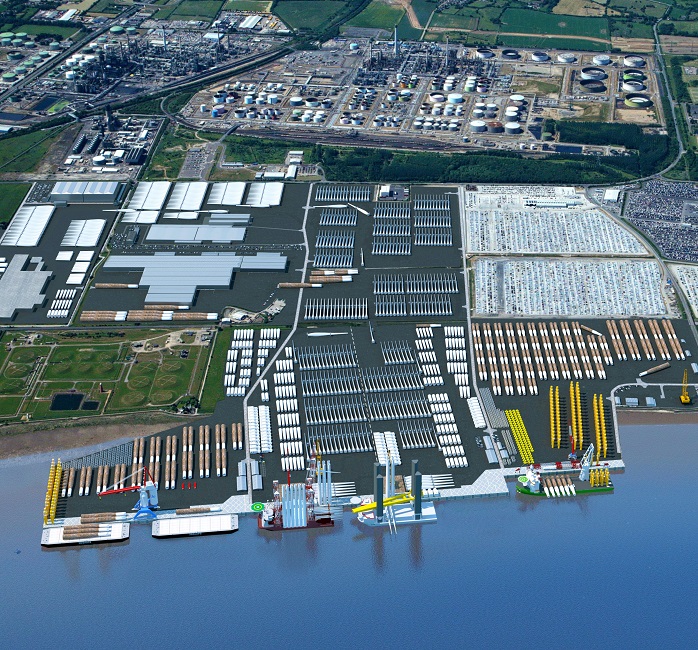 On March 10, the UK government announced 75 million pounds ($103.1 million) of investment in the Able Marine Energy Park (AMEP) in the Humber region and 20 million pounds towards a new hub in Teesworks, Teeside.

The UK aims to quadruple offshore wind capacity to 40 GW by 2030 and is planning to set a minimum local content requirement of 60% for new projects. The two new sites could together host up to seven manufacturers and create 6,000 jobs, the government said, competing with other expanding North Sea hubs like the Port of Esbjerg in Denmark.

The government has designated the sites as Freeports - zones that offer tax breaks and tariff exemptions to entice investors. GE immediately announced it would build a turbine blade factory at Teesworks by 2023 that will supply the giant 3.6 GW Dogger Bank wind farm being developed by SSE Renewables, Equinor and Eni in the North Sea.

“The submission of the detailed planning application is due in the summer with construction due to start in Q1 2022,” he said. The new UK ports will help fill a gap in deep water facilities that are suitable for integrated offshore wind pre-assembly, Benj Sykes, UK Head of Market Development at Orsted, the world's largest offshore wind developer, said. Orsted operates 12 wind farms in the UK with capacity of 4.9 GW, is building the 1.4 GW Hornsea 2 array and is developing three other projects in the country.

"As the technology continues to grow larger (for example larger turbines) this need for specialist quayside facilities will continue to grow," he said.

The AMEP site in the Humber will be ‘future proofed’ to accommodate growing turbine sizes, Stephenson said.

AMEP is being developed on a 536-acre site with 1,349m of new deep water quay and has sufficient depth and load capacity for the larger components and installation vessels expected in the future, Stephenson said.

Going forward, Able could also develop a large dry dock space at its port in Hartlepool, just north of Teeside, for the assembly of floating wind foundations, he said. The UK government recently set a target of 1 GW of floating wind by 2030.

The Freeport status will unblock market barriers for manufacturers from the UK and overseas, a government spokesperson told Reuters Events.

With such large components, the offshore wind industry "cannot compete" with the revenue per square meter generated in ports by vehicle exporters and container handlers, Sykes noted. Freeport status will allow offshore wind companies to import goods without paying tariffs, process them into a final product and then either export them or pay a tariff to sell them into the domestic market. In addition, tax relief is offered on land purchases and building and machinery costs. Businesses are also exempt from rates for up to five years and benefit from reduced National Insurance contributions for employers.

GE's commitment to a factory at Teesworks was "thanks to Teesside receiving free port status, as well as government backing," the government said in a statement.

GE’s blade subsidiary LM Wind Power will use the plant to build 13 MW turbines that feature blades of length 107 metres and rotor diameter 220 metres. Turbine capacities continue to rise and researchers have already produced reference designs for models of up to 20 MW.

The port hubs are likely to attract a range of manufacturing and operations and maintenance (O&M) groups, the government spokesperson said.

AMEP could soon host the UK's first monopile factory, an important step towards domestic content targets. There are around 2,300 offshore wind turbines operating in UK waters and almost all of them are supported by steel monopiles produced overseas.

In August 2020, the government signed a MOU with SeAH for the development of a monopile fabrication facility. Able also signed an MOU with SeAH last year, although the construction of the plant in the Humber will depend on the final commercial terms, Stephenson noted.

“It would be fantastic to see a new foundation supplier choose the UK as its market of choice," Danielle Lane, UK Country Manager at Vattenfall, one of Europe's largest offshore wind developers, told Reuters Events.

Such a factory would show confidence in the UK offshore wind opportunity and allow access to export markets in "Europe and beyond,” Lane said.