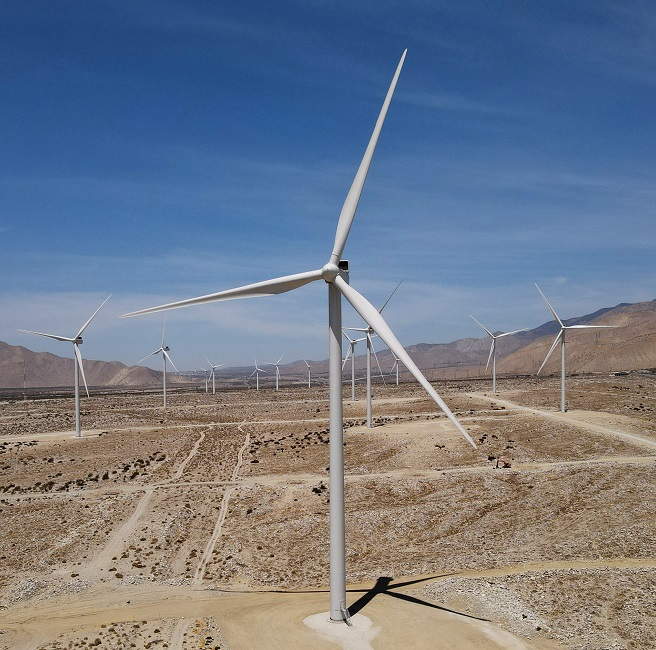 Tax credits in the climate bill improve the economics of wind and solar projects and provide developers with long-term visibility. (Image: REUTERS/David Swanson)

President Joe Biden on August 16 signed into law $370 billion of clean energy measures in a transformational bill that could put the country back on track towards the president's climate goals.

The Inflation Reduction Act includes sweeping measures to accelerate wind, solar and energy storage and was agreed by the Senate on August 7 and the House of Representatives on August 12. Wind and solar installations must rapidly accelerate to achieve Biden's goal of a decarbonised power sector by 2035, the Department of Energy (DOE) said in a report last year.

Last month, Democrat Senator Joe Manchin agreed to support the bill following months of deadlock with the Biden administration. Manchin is Senator for coal-reliant West Virginia and his support was critical for passage of the legislation in the evenly divided Senate as it lacked any Republican backing.

The bill would reduce U.S. carbon emissions by roughly 40% by 2030, Senate Majority Leader Chuck Schumer said. Biden aims to cut emissions by at least 50% by 2030.

California has set a new offshore wind target of 2 to 5 GW by 2030 that will place it at the forefront of global floating wind deployment.

California Energy Commission (CEC) adopted the goal on August 10 in a report ordered by State Governor Gavin Newsom. By 2045, California will aim to build 25 GW of offshore wind, it said. The projects will use emerging floating wind technology as U.S. Pacific offshore wind sites are too deep for fixed-bottom technologies being used on East Coast projects.

The U.S. Department of Interior plans to sell five offshore wind leases off the coast of California later this year, it said in May. The department's Bureau of Ocean Energy Management (BOEM) opened a public consultation for five areas in Morro Bay in central California and Humboldt Bay in the north. The areas span 373,000 acres (150,950 hectares) and could generate up to 4.5 GW of power. Activity is also spreading north into Oregon following a call for interest in waters in the south of the state.

By 2023, the CEC will develop a permitting process for offshore wind farms and associated grid infrastructure and report on the economic benefits for seaports and workforce development, the commission said. Grid constraints limit the siting options for the first large offshore wind projects and developers and state authorities must resolve supply chain and offtaker risks.

California is currently scrambling to acquire new power sources to prevent shortages during summer heat waves. In May, Governor Newsom set out plans for a 5 GW power generation reserve after officials warned California could suffer a power shortfall of 1.7 GW during extreme heatwave conditions this summer. Delays to renewable energy projects and low hydroelectric supplies due to droughts have raised the risk during the evening when solar power wanes, it said.

The California offshore wind leases form part of the Biden administration's plan to install 30 GW of U.S. offshore wind capacity by 2030 and complete environmental reviews of 16 projects by 2025.

The Biden administration is keen to establish a U.S. offshore wind industry and create jobs and the California lease auctions will include a 20% bidding credit to developers that invest in the U.S. supply chain. In March, the California Energy Commission (CEC) approved a $10.5 million grant to develop the Port of Humboldt Bay for offshore wind construction.

Developers can also gain a 2.5% bidding credit by signing agreements with local communities and ocean users such as fishing groups, the Interior Department said.

Leading global turbine supplier Vestas raised its prices in the second quarter by 22% on a year ago and expects to deliver more positive results next year as high costs are passed on to customers, the company said August 10.

The Danish company reported a quarterly loss of 182 million euros ($185.73 million) before interest and tax (EBIT), larger than the loss of 143 million euros forecast by analysts in a Refinitiv poll.

Cost inflation and supply chain woes followed years of intense price competition in the wind turbine market, denting the margins of suppliers. In May, Vestas cut its 2022 margin forecast due to the impact of the war in Ukraine on global markets and write-downs in its offshore wind business.

Higher selling prices in the second quarter showed Vestas was able to pass on some of the cost increases.

"We have taken in orders at the highest price level in ten years," Chief Executive Henrik Andersen told Reuters. "Our price development will lead to a more positive 2023," he said. Climate measures in the U.S. Inflation Reduction Act passed by Congress this month would strengthen Vestas' order intake and be "very supportive of renewable energy in the United States over the next ten years," Anderson added.

Annual wind and solar installations in the EU are forecast to reach only half of the 76 GW required by 2026 to meet the region's climate goals, Ember warned.

"Only a handful [of EU countries] are reaching required wind deployment rates, and key countries for solar deployment are also lagging behind," it said.

Permitting remains a key barrier for developers and the European Commission should enforce a two-year limit on permitting procedures and a new higher target of 45% renewable energy by 2030, Ember said.

In May, EU leaders agreed to designate areas for renewable energy development and streamline environmental assessments as part of measures to rapidly phase out Russian oil and gas supply.

Deployment rates required to limit global warming to 1.5°C should be transposed into national energy and climate plans (NECPs) submitted by EU members during the formal review process next year, Ember said.

National renewable energy auctions will need to be "significantly increased to capacities in-line with 2030 targets," it said.