Solar developers are pledging new U.S. factories and giant orders to curb import risks but government support will be crucial. 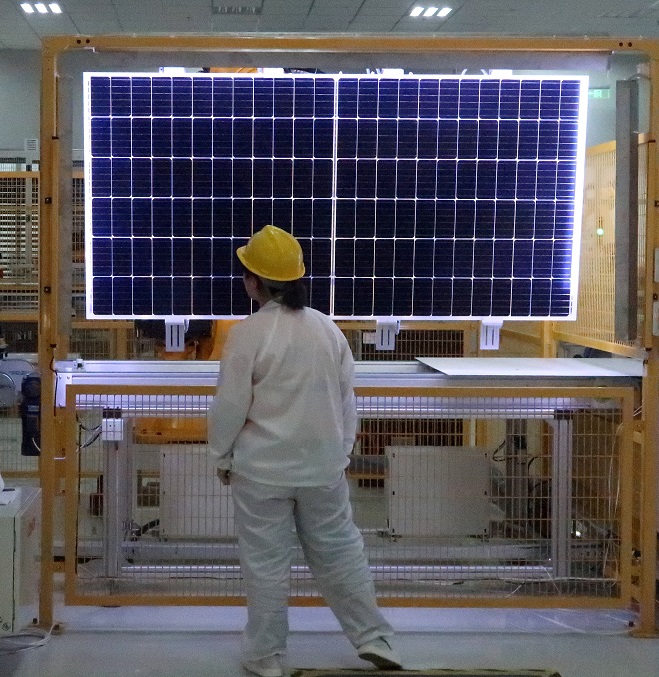 U.S. solar developers currently source most of their panels from Asia and demand is set to rise. (Image: REUTERS/Muyu Xu)

The cost of materials and logistics has soared as economies recover from the pandemic and governments hike renewable energy targets. Russia's invasion of Ukraine has further disrupted supply chains and raised energy security concerns. The U.S. and Europe are expanding solar manufacturing capacity but domestic demand will continue to outpace supply.

U.S. developers have faced additional price uncertainty from the threat of import tariffs on the four largest supplier countries in Southeast Asia. The White House said the U.S. is on track to triple manufacturing capacity to 22.5 GW by 2024 but solar installations must triple to over 60 GW/year to hit President Biden’s climate goals. A new U.S. spending bill includes tax credits for solar manufacturing and if passed by Congress, would help to narrow the domestic supply gap.

Developers are using flexible logistics terms and price hedging tools to limit the impact of international supply disruptions. Longer term, developers are strengthening partnerships with suppliers and in some cases, expanding their own manufacturing capacity.

Enel Green Power is developing Europe's largest bifacial module factory in Sicily, Italy and is looking to build a similar facility in the U.S.

Enel secured funding from the European Union for its new 3 GW factory in Italy. The group is currently studying sites for a U.S. factory and looking to work with other firms investing in upstream activities such as polysilicon refining and wafer manufacturing, a company spokesperson told Reuters Events.

Enel aims to make a decision at the start of 2023 and bring the factory online in 2025.

“Trade policy or investment support will play a key role in that decision, helping to bridge the competitive gap against imported panels," the spokesperson said.

Enel plans to triple its global installed renewable energy capacity to 154 GW by 2030 and the group has adapted logistics and sourcing and used hedging mechanisms to mitigate supply chain disruption. Examples include changing the sourcing of steel for solar trackers and transformer components after Russia invaded Ukraine and using alternative ports and transportation methods during lockdowns in Shanghai.

Some developers are pooling their buying power to boost supply chain development.

In June, AES Corporation, Clearway Energy Group, Cypress Creek Renewables and D. E. Shaw Renewable Investments created a new consortium that will buy 6 to 7 GW/year of U.S.- made solar modules from 2024 at a cost of over $6 billion.

The partners are offering to buy the modules over four years, AES told Reuters Events.

“Our offer represents around 25% of the entire solar demand in the U.S., so we think this is enough to incentivize suppliers," a company spokesperson said.

Some suppliers are diversifying their businesses to limit the impact of logistics and pricing risks. Spanish solar tracker manufacturer Soltec is expanding into an independent power producer to create a vertically integrated business, the company announced in May. Soltec has created a new asset management unit that will have more than 1 GW of PV generation capacity by 2025, it said.

The Biden administration faces the challenge of encouraging domestic manufacturing expansions while creating a competitive market that accelerates solar deployment.

In June, the Biden administration waived anti-dumping duties on solar panels from the four largest supplier countries in Southeast Asia for two years in an attempt to ease price uncertainty that has delayed projects and curbed investments. A two-year waiver on import tariffs would allow the build-up of domestic manufacturing capacity, the Biden administration said. The Department of Energy (DOE) later unveiled $56 billion of funding for U.S. solar manufacturing technologies that increase energy security.

The U.S. has separate barriers in place for products from China’s Xinjiang Province under the Uyghur Forced Labor Prevention Act (UFLPA), Xu noted. Xinjiang is a key manufacturing region and produces around 40% of global polysilicon supply.

Washington and other Western governments accuse Beijing of mass human rights abuses in Xinjiang and imports are detained by Customs and Border Protection until lengthy assessments are completed.

Enel expects prices of solar components will stabilise within the next couple of years thanks to investments made in other global markets and the start-up of new facilities in the U.S.

Several U.S. factory expansions are underway but the pace of growth will largely depend on the support measures yet to be agreed by Congress. More firm commitments from suppliers are required to fulfil the Biden administration's target of 22.5 GW by 2024, Xu warned.

“Without any meaningful expansion, domestic manufacturing will only be able to cover [around] 20% of module demand in the U.S. in the near future," he said.

"From a technical standpoint, new capacity can be added rather quickly for module assembly, but [this is] much less likely for upstream processes such as polysilicon and wafer," he said.