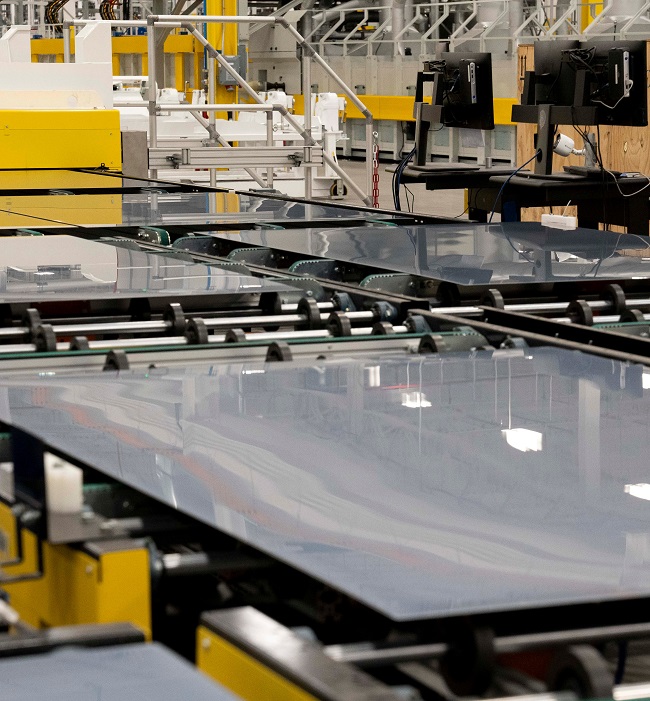 Europe and the U.S. aim to triple solar manufacturing capacity in the next few years. (Image: REUTERS/ Dane Rhys)

As Europe and the U.S. look to accelerate renewable energy deployment, a massive expansion in manufacturing capacity is underway.

The economic fallout of Russia’s invasion of Ukraine has speeded efforts to boost energy security while pursuing climate goals. In May, the European Union executive pledged to double solar capacity to 320 GW by 2025 and install 600 GW by 2030 under its new RePowerEU plan. U.S. solar installations must hike to around 60 GW/year by around 2025 to meet President Biden's decarbonisation targets.

Greater local manufacturing capacity will reduce supply chain risks and curb the exposure of solar projects to global prices. China currently supplies around 75% of PV plant components in Europe while the U.S. imports almost all of its solar module capacity from four South East Asian countries after anti-dumping duties on China shifted activity to other low-cost countries. Europe and the U.S. each have only 8 GW of module manufacturing capacity and installed 26 GW and 24 GW of solar capacity in 2021, respectively.

To reduce imports, the EU aims to expand manufacturing capacity to 20 GW by 2025 and has created an industry alliance to steer growth and access EU funding mechanisms. Far greater capacity would be required to match the EU's new solar installation targets.

Not all of the projects will be built and some are still trying to attract financing and political support, Rentsch said. “I would say it is a matter [of] how the first movers perform. If companies like MeyerBurger succeed, others will follow immediately," he said. MeyerBurger plans to expand its factory in Freiburg, Germany to 1.4 GW by 2023.

Solar developers have called for larger factories in Europe to gain economies of scale and compete with Asian imports. Support to develop high-efficiency production lines will also be key.

National or EU support could be used to help manufacturers grow to a sufficient size but they will need to show they can be commercially sustainable in the long term, Rentsch said.

“With a growing and sustainable local market, production and supply chain industry will come back to Europe,” he said.

The primary focus in Europe and the U.S. is on solar module factories that assemble solar cells into durable and transportable panels. The soaring cost of raw materials and logistics and strong demand from Chinese developers have created price uncertainty and delayed projects. Last year, European project capex doubled in some cases causing developers to cancel projects, a spokesperson for Portuguese utility EDPR told Reuters Events in April. On July 12, the EU selected REC Solar for an EU grant to build a 2 GW module manufacturing plant in northern France. The facility will assemble innovative heterojunction (HJT) bifacial panels and be capable of manufacturing next generation HJT-Perovskite technologies, EU documents show.

Meanwhile, Italian energy group Enel is expanding its 3Sun factory in Italy from 200 MW to 3 GW by 2024, making it Europe’s largest bifacial module facility. The 600 million euro ($657 million) expansion project will receive 118 million euros from the EU’s Innovation Fund. French start-up Carbon plans to raise capital in Q1 2023 for a new 5 GW facility in France that could be expanded to 15 GW by the end of the decade.

"EU funding will be more than welcome to support R&D, especially on the technology side and carbon emission reduction in some key processes," Pascal Richard, Chairman of Carbon, told Reuters Events.

The new capacity looks set to improve security and stabilise prices, rather than create savings compared with Asian imports.

“The cost of local production will decline because of higher economies of scale and lower transportation, but this won’t significantly impact prices globally,” Richard said.

Meanwhile, the White House said the U.S. is on track to triple manufacturing capacity to 22.5 GW by 2024. The Biden administration has failed to gain congressional support for a suite of climate measures in its latest spending plan and last month the President authorised the use of the Defence Production Act, allowing the federal government to invest directly in clean energy projects if agreed by Congress. On July 14, the Department of Energy (DOE) unveiled $56 billion of funding for solar manufacturing technologies that reduce costs and increase energy security.

Secure supply and competitive costs require a build-up of capacity along the whole solar value chain. SMA, Europe's largest inverter supplier, plans to double capacity at its German headquarters to 40 GW by 2024. Inverters typically represent 5 to 10% of solar project costs and replacements form a key part of maintenance costs.

SMA's expansion project is still at the planning stage but SMA is investigating various subsidies for commercial buildings, including from the EU Innovation Fund and the KfW subsidy program for efficient buildings, Jurgen Reinert, CEO of SMA, told Reuters Events.

"Europe can be a front runner and ensure long term agreements for electronic components," he said.

Europe has retained sufficient expertise to re-establish value chains but some of the gaps will be harder to fill than others. Factories for ingots and wafer production are more complex to establish and can benefit from being manufactured in a vertically integrated facility at the same location to minimise transport costs. Support measures that compensate for CO2 savings would further solidify support for local supply chains, Rentsch noted.

Even if Europe and the U.S. can satisfy domestic demand for PV components, basic materials and primary products such as silicon and rare earths will have to be imported. Global silicon prices have soared on rising demand from the solar industry and much of the increase has been absorbed by manufacturers of solar wafers, cells and modules.

EU member states should intensify efforts to minimise the use of materials and follow a "single high standard for sustainability" along the full value chain, rather than introduce regional barriers, Reinert said.