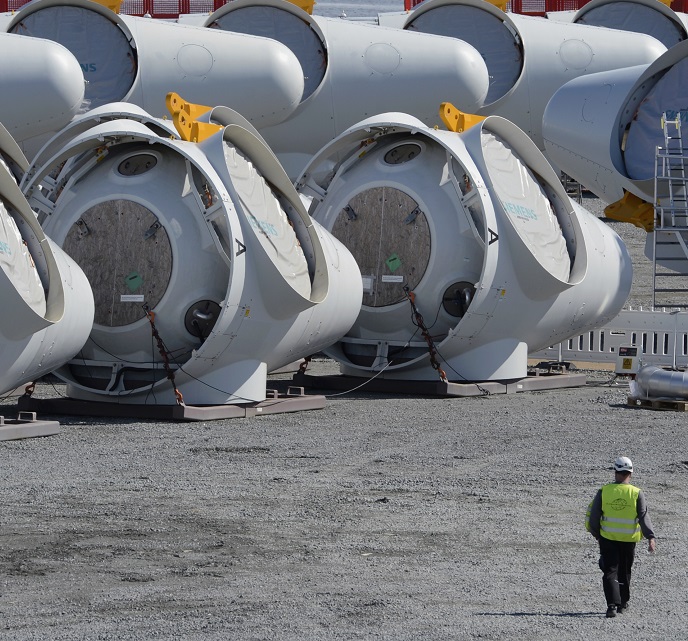 As the U.S. prepares to hike renewable energy spending, a new partnership between the Biden administration and several eastern states shows the urgent need for a coordinated buildout of offshore wind infrastructure.

The new federal-state initiative will help secure funding for a domestic offshore wind supply chain and support a fleet of specialized vessels, the White House said. Offshore wind developers will require around 2,100 turbines and foundations, 6,800 miles of cables and access to dozens of vessels and barges to meet President Biden's goal of 30 GW of offshore wind by 2030.

The initiative will be boosted by President Biden's Inflation Reduction Act, passed by Congress and signed into law last week. Tax credits for wind component manufacturers are among $370 billion of clean energy measures included in the Act.

“We probably need to have the bulk of our supply chain planned out and beginning development in 2023-2024 for it to be operational this decade," Shields said.

Siemens Gamesa plans to build the first U.S. offshore wind turbine blade factory in Virginia but the first offshore wind projects will have to source turbines and other major components from Europe or Asia. The timelines of U.S. projects could be impacted by competition from offshore wind builders in Europe as the region accelerates deployment to curb its reliance on Russian oil and gas.

Developers have long called for a more regional approach to supply chains. State-level offshore wind targets have led to a fragmented buildout of supply infrastructure that is inefficient and leads to higher procurement costs, Fred Zalcman, Director of the New York Offshore Wind Alliance, said.

“Ideally, this initiative will provide a coordinated approach to supply chain development where neighboring states are being mutually supportive instead of competing,” he said. The federal-state partnership must support the development of regional hubs that allow states to share assembly, staging and harbour facilities, industry sources said.

Some states are already collaborating to share expertise and resources. New York and New Jersey, early movers in offshore wind, have signed a deal to cooperate and have offered economic incentives, such as tax credits, to secure local procurement. Virginia, Maryland, and North Carolina have also signed a MOU to collaborate.

In Gulf states and California, the industry can take advantage of existing know-how in shipbuilding, vessel upgrades and offshore substations.

“Prioritizing areas where the expertise already exists is really important and valuable for the industry as we look to both build out that domestic supply base and drive down costs,” said Hayes Framme, Head of New Markets and Supply Chain at Orsted Offshore North America. Orsted is the world's largest offshore wind developer and plans to install 15 GW globally by 2025.

Developers have been working with state authorities and turbine suppliers to prepare for large-scale deployment. New Jersey is building a wind port that can accommodate manufacturing facilities in the future. The state authorities are “assuming permitting and construction risks, so when manufacturers come in they will find an environment that is conducive to investing," said Will Cotta, Supply Chain Manager at developer Ocean Winds.

Atlantic Shores, the development group owned by Shell and EDF Renewables, is helping to set up a new nacelle manufacturing facility in New Jersey by committing to a wind turbine generator order and providing additional financial support.

The factory would be owned by the turbine manufacturer and Atlantic Shores plans to make a decision on the supplier in the coming weeks, Joris Veldhoven, the company’s Commercial and Finance Director, said.

The federal-state initiative will also work to unionise the emerging offshore wind workforce, considered by many project partners as crucial for the future of the industry. The Biden administration has already incentivised developers to source local components and labour in its latest offshore wind leasing program.

The federal-state partnership has designated offshore wind vessels “of National Interest” in order to close a looming supply gap for wind turbine installation vessels. Utility Dominion Energy has secured the first order for a U.S.-built installation vessel (WTIV) from Texas-based shipbuilder Keppel but developers will require as many as six vessels that can transport and install the latest large-scale turbines to meet Biden's 2030 targets.

The initiative will incentivize domestic build by standardizing vessel specifications and requirements and providing economic incentives both at state and federal levels.

As activity increases, a regional approach to grid build will also be required to reduce project costs and avoid delays. The first offshore wind farms will be connected via radial links to shore but the availability of landing points will dwindle as more projects are installed.

Regional grid build is the “biggest unspoken challenge for the deployment of offshore wind,” Framme said.

“I hope this agreement pulls in agencies like FERC [the Federal energy regulator], state utility commissions, and regional transmission organizations like PJM, New York ISO, and ISO New England to get these electrons to market in a way that maximizes value," he said.

“A regional approach almost always offers better coordination and opportunities for savings," Suzanne Glatz, Director of Strategic Initiatives and Interregional Planning at PJM, said. "But each state has different goals and timelines which may supersede such a regional approach in the short term."