UK must act on storage to ditch gas for offshore wind 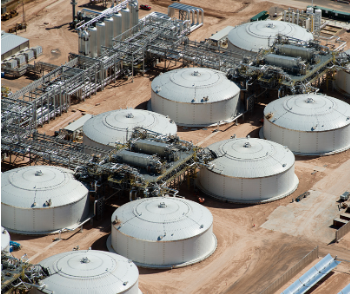 Last week, the UK raised its offshore wind target by 10 GW to 50 GW by 2030 and pledged faster onshore wind and solar build in a new energy security strategy that could see 95% of power from low carbon sources by 2030.

The government will reform offshore wind planning processes to cut approval times from four years to one and hold annual auctions for contract for difference (CFD) subsidies every year, it said, rather than every two years under the current process.

Large amounts of long duration energy storage (LDES) are needed to achieve the government’s renewable energy goals and deployment is being held back by a lack of supportive market mechanisms, industry experts warned.

The UK will require up to 24 GW of LDES to achieve net zero power generation, almost 10 times the current installed capacity, Aurora Energy Research said in a report published in February.

A "massive ramp up" of LDES is required, a spokesperson for utility SSE Renewables told Reuters Events.

LDES would reduce the UK’s reliance on imported gas and when combined with renewables “will be a more cost-effective and deliverable solution for UK energy security,” the spokesperson said.

There’s “no shortage of desire” for zero carbon power, Keith Anderson, CEO of ScottishPower, said. “But we’ve got to get real on removing the barriers.”

Gas-fired power plants generated 40% of UK electricity in 2021, making electricity prices particularly sensitive to gas markets. European gas prices climbed as economies staggered out of the pandemic and Russia's invasion of Ukraine propelled prices to new heights, exacerbating a cost-of-living crisis that is rippling through Europe. Advancement of energy storage technologies “will be vital in our transition towards cheap, clean and secure renewable energy," Greg Hands, Minister of State at the Department for Business, Energy and Industrial Strategy (BEIS), said in February.

These technologies "will allow us to extract the full benefit from our home-grown renewable energy sources, drive down costs, and end our reliance on volatile and expensive fossil fuels,” he said.

The government's energy security strategy will support the buildout of "large-scale" LDES by developing "appropriate policy to enable investment," it said.

A cap and floor mechanism would provide a minimum revenue to developers to help them secure financing. It would not likely be implemented until next year at the earliest.

SSE sources 100% of its power from renewable energy and hydroelectric plants and is developing the Coire Glas Pumped Hydro Storage project in the Scottish Highlands that could deliver 1.5GW/30GWh of storage capacity by 2030.

Even mature technologies such as pumped hydro storage need support through a cap and floor regime to "stabilise revenues and de-risk the investment," the SSE spokesperson said.

The proposed cap and floor is a "significant step in the right direction," Jeffrey Douglass, Markets and Analytics Manager at Invinity, a vanadium flow battery developer, said.

Markets should be structured in a way that does not disadvantage zero carbon energy storage over fossil fuel generation, Douglass said.

"This could take the form of a direct zero-carbon premium or zero-carbon capacity market for example," he said.

The government is also supporting the development of less mature LDES technologies to accelerate their route to market.

In February, BEIS allocated 6.7 million pounds ($8.7 million) towards new LDES technologies in the first funding round under a 68-million-pound LDES support program. The government will hold annual CFD auctions from March 2023 and will propose changes from 2024 that will incentivise lower overall system costs, it said. CFD subsidies have helped drive UK offshore wind growth and developers have long since called for more frequent auctions to provide a clearer and more consistent deployment timeline.

"The measures outlined in the strategy to accelerate offshore wind are the right ones. Specially those needed to reduce planning decision timescales and speed up grid connections," SSE said. "Now it is important that Government works together with industry, regulators and wider stakeholders to implement those measures," it said.

Major grid investments will be required to accommodate such vast amounts of offshore wind and reduce the impact on onshore infrastructure.

Until now, offshore wind projects have been connected to individual “radial” offshore transmission links. The UK government is developing plans for a coordinated offshore wind grid that would cut costs but the timeline remains unclear.

"We know we will need all of these wind projects to meet targets so an incremental approach is not cost-effective," SSE said.

"A strategy with clean energy at its heart is critical,” he said. “Net zero is achievable and affordable and is a clear route to long-term resilience.”