Scotland roars ahead on floating wind but delivery risks lurk

The ScotWind lease auction has placed Scotland at the forefront of floating wind investment but clearer plans for UK subsidies and offshore transmission are required to cement a world-leading supply chain, experts said. 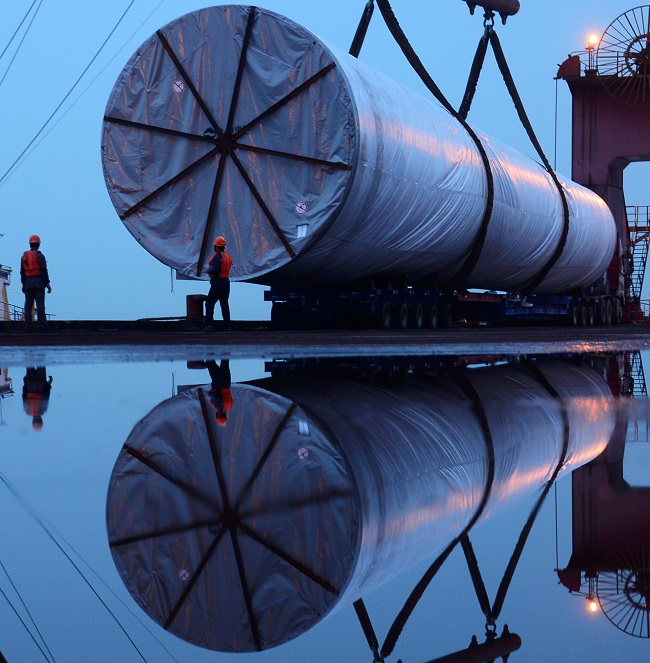 ScotWind was the first offshore auction in Scotland in a decade and allocated 25 GW of leases, including 15 GW of floating projects, far more than the 10 GW initially targeted due to surging demand for projects.

Successful bidders will pay a total of 700 million pounds ($958 million) in option fees to the Scottish government for the 7,000 km2 of leases. All bid prices were in the highest band after Crown Estate Scotland capped prices at 100,000 pounds/GW.

The floating wind projects will be around 20 times larger than any completed to date, creating economies of scale and catalysing the UK supply chain. The 50 MW Kincardine floating wind farm in Scotland is currently the largest project online and France and Spain have also announced tenders for much larger projects.

Iberdrola's ScottishPower was the biggest winner in ScotWind - it secured 5 GW of floating capacity with partner Shell and 2 GW of fixed-bottom - but new entrants BayWa r.e. and Falck Renewables also snapped up leases.

“The competition seen [and] the prices paid demonstrates the confidence of bidders that the sites can deliver viable floating offshore wind farms,” MacDougall said. 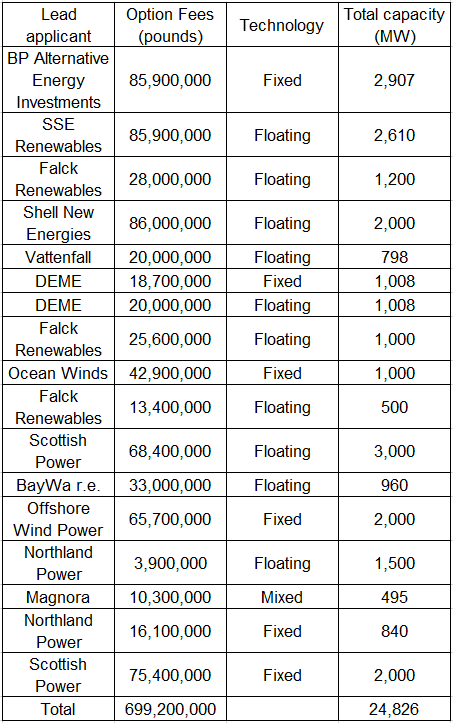 The price cap implemented in the auction may have aided developers with smaller balance sheets and should encourage earlier supply chain commitments in Scotland and the UK, Cleverly said.

Scotland introduced the price cap after surging demand for projects hiked bid prices in the England and Wales leasing round last year. Oil group BP bid the highest price in that auction to secure its first UK offshore wind project with utility partner ENBW. The average payments per GW in Scotland will be 94% lower than in England and Wales, analysts at investment research firm Bernstein said.

The UK government has introduced a 60% local content requirement for offshore wind projects and this represents around 1 billion pounds/GW for the ScotWind projects with a total of 25 billion pounds injected into the UK supply chain, Cleverly said.

Floating wind partners are ready to deploy floating technology at scale but mass deployment at competitive costs will require investments in new port infrastructure and balance of plant, a spokesperson for Siemens Gamesa, the leading supplier of offshore wind turbines, said.

Currently, only a very limited number of UK ports could provide the storage, assembly and marshalling capacity for floating wind foundations and the large turbines proposed, the spokesperson said.

Developers use their leases to bid for long-term Contract for Differences (CFDs) that are allocated by the UK government in auctions every two years. Offshore wind partners have long called for more frequent auctions and a clearer timetable. The last auction was held in December and results are expected this spring.

“We have asked for certainty of auction dates out to 2030, so that supply chains beyond the tier one [large suppliers] can also see the pipeline and we can smooth out the investment cycles of supply chain," Siemens Gamesa said. The turbine group estimates a UK offshore wind pipeline of around 3 GW per year for the UK to achieve its offshore wind goals. In addition, the UK government has launched a consultation on changes to the CFD auction that would tighten local content commitments.

Suppliers "need to know what the local content expectations will be, to have consistency and a level playing field across the developers and supply chain tiers,” Siemens Gamesa warned.

Permitting represents another risk for developers. The UK government must increase resources for consenting authorities and establish a more flexible consenting process to accommodate the large number of ScotWind projects and avoid delays, Cleverly said.

Until now, offshore wind projects have been connected to individual “radial” offshore transmission links and developers are building larger projects, putting greater pressure on local and regional grid infrastructure. The UK government is developing plans for a new offshore wind grid in its Offshore Transmission Network Review launched in 2020 but the timeline remains unclear.

Much of the power supplied from ScotWind will be distributed to England and will require a new subsea high-voltage link between Scotland and England to reduce curtailments, Cleverly said.

If these risks can be mitigated, the ScotWind projects will place the UK at the forefront of global floating wind development.

“With floating wind at this scale in its infancy, there is an opportunity for the UK and Scottish supply chains to become established at an early stage," Slater said.

These supply chains can become "market leaders, not just for Scottish floating projects, but also for exporting expertise [worldwide],” he said.