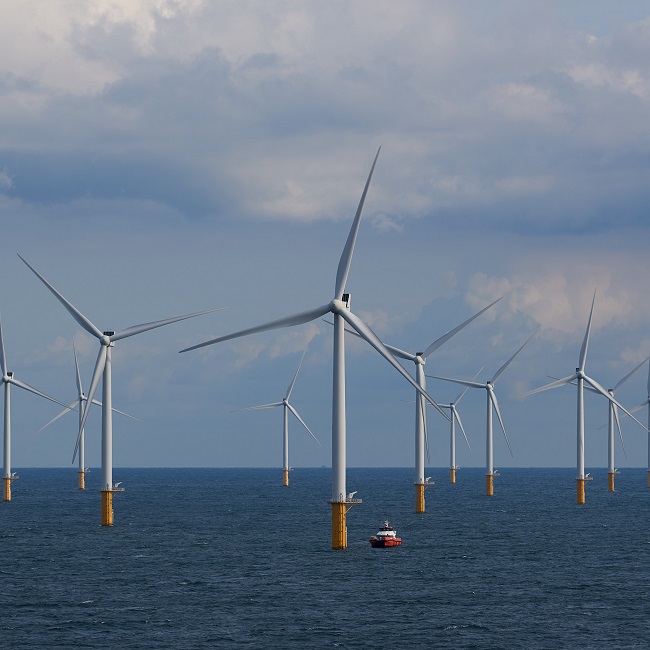 The UK government has raised its offshore wind target by 10 GW to 50 GW by 2030 and pledged faster onshore wind and solar build in a new energy security strategy announced April 7.

Boris Johnson's government also plans to approve a new fleet of nuclear power plants as it looks to curb the UK's reliance on imported gas and stabilise soaring wholesale energy prices. Gas-fired plants currently generate around 40% of the UK's electricity and the government will launch new oil and gas licensing rounds in the UK North Sea, it said.

The government failed to set specific targets for onshore wind and solar power, rejecting proposals by the energy ministry.

The UK was already leading Europe on offshore wind build. To accelerate deployment, the government will introduce a range of measures aimed at shortening the approval process from four years to one year. Auctions for contract for difference (CFD) subsidies will be held every year, rather than every two years under the current process, it said.

To meet its aim, the government raised its floating wind target from 1 GW to 5 GW. Industry experts had already said the previous target was too low and in January Scotland allocated 15 GW of floating wind projects, putting the UK at the forefront of floating wind development. Far less support was offered to onshore wind projects and large-scale solar, which have faced opposition from members of Johnson's Conservative party and local groups.

For solar, the government pledged a "five-fold increase in deployment by 2035" and will simplify planning processes for rooftop solar, lower financing costs and consult on supportive amendments to planning rules for larger projects, it said.

Portugal will accelerate wind and solar build to achieve 80% of electricity from renewable energy by 2026, four years earlier than previously planned, the government announced April 1.

The European Union (EU) plans to cut its dependence on Russian gas supplies by two thirds by the end of the year end it entirely by 2027 and will study new policies that accelerate renewable energy, the European Commission (EC) said last month. Germany has pledged to fast-track the implementation of new energy laws that accelerate wind and solar deployment and Portugal's neighbour Spain has approved an accelerated permitting procedure for solar projects of up to 150 MW in a suite of energy transition measures, according to media reports.

Portugal currently has 7.3 GW of hydroelectric capacity, 5.6 GW of onshore wind and 2 GW of solar power.

The projects will be due online around 2026, Matos Fernandes said in an interview.

Offshore wind farms in Delaware could supply power at a similar cost to current wholesale levels, according to a new report by researchers at the University of Delaware.

The cost estimate is based on an 800 MW offshore wind project and three of these could provide power for the entire state.

Offshore wind activity is spreading up and down the U.S. East Coast but Delaware is yet to launch its own program. The state currently gets almost all its power from gas-fired generation. The study was conducted by the University of Delaware's Special Initiative on Offshore Wind (SIOW) and used learnings from new regulation and offshore wind contracts in New York and Massachusetts.

Lawmakers may need to change regulation to incentivise utilities to secure long-term offshore wind contracts rather than short-term gas plant deals, they said.

“The whole system is geared for fossil fuel or a nuclear supplier, not for wind power or any big, renewable energy project,” Willett Kempton, professor of marine sciences and co-author of the report, said. “So adjustments to rules and law would make this happen in the most cost-effective way.”