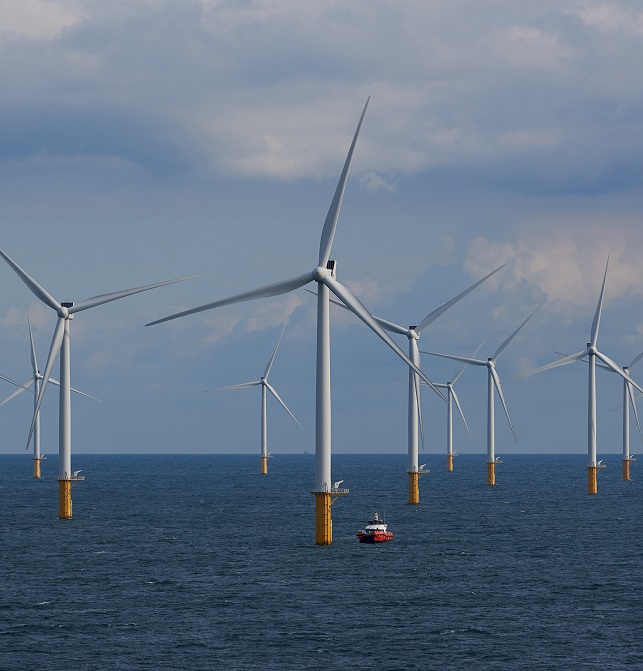 Competition for offshore leases has soared since oil and gas groups and institutional investors entered the market. (Image credit: REUTERS)

Scotwind is the first auction for seabed licences in Scotland in a decade and offered a total lease area of 8,600 sq km, including zones only suitable for floating wind projects. Crown Estate Scotland hiked the auction price cap by 10 times to 100,000 pounds ($137,900) per square kilometre, after surging demand hiked prices in England and Wales.

"The high number of applications from developers shows just how much potential Scotland’s seas hold for the future expansion of offshore wind," Colin Palmer, Director of Marine for Crown Estate Scotland, said.

The auction window closed on July 16 and Crown Estate Scotland plans to make initial offers to successful participants in January 2022, it said.

The lease auctions form part of the UK government's plan to increase offshore wind capacity from 10 GW to 40 GW by 2030. The leases are required to participate in contract for difference (CFD) auctions for state-backed offtake contracts that are held every two years. Prices in the Round 4 lease auction in England and Wales in February hit as high as 154,000 pounds/MW/year. The auction was the first in Europe based on bids for upfront option fees, which the developer must pay until it gains final planning permission.

The England and Wales auction allocated six offshore wind leases to four different groups for a total capacity of 8 GW. The highest price was jointly bid by oil group BP and German utility EnBW, for each of two 1.5 GW leases, and was 65% higher than the next successful bidder.

The European Commission (EC) has published a new directive which raises the renewable energy target for the European Union (EU) to 40% of power generation by 2030, compared with a previous target of 32%.

The directive forms part of a package of measures designed to reduce net greenhouse gas emissions in the EU by at least 55% by 2030 compared with 1990 levels. The "Fit for 55" package, unveiled by the EC on July 14, includes more ambitious energy efficiency targets, tighter market rules for the carbon emissions trading scheme (ETS) and a carbon levy on the import of goods from countries with lower costs due to less strict emission standards. To become law, the measures must be agreed by EU countries and the European Parliament.

Last September, the EC said it planned to increase the renewable energy target to 38-40% after studies showed current policies would result in a 34% share. The new target will require 30 GW of new wind capacity per year, compared with current predictions of around 15 GW/year in 2021-2025, according to industry group WindEurope. The new directive also sets out specific renewable energy targets for the transport, heating and cooling, building and industrial sectors, the EC said.

Earlier this month, Europe's largest industrial companies called on the EC to enact measures that support a "massive acceleration" of renewable energy capacity to meet its longer-term target of carbon neutrality by 2050.

"Without a stronger European policy focus and increased investments boosting the availability of renewables for industrial use, we not only risk delaying needed [greenhouse gas] reductions, affecting industrial competitiveness but also our overall credibility to deliver on our common commitments," the companies said.

Under its Green Deal plan, the EC has pledged to spend one third of the 1.8 trillion euro ($2.1 trillion) investments from the NextGenerationEU covid recovery plan towards reducing greenhouse gas emissions.

Italy's Terna plans to invest a record 18.1 billion euros ($21.3 billion) in the national power grid over the next 10 years to accelerate renewable energy deployment and economic growth, the grid operator announced July 7.

Terna plans to spend 25% more than in its previous 10-year plan and the grid enhancements will help Italy meet the objectives set out in its National Integrated Energy and Climate Plan (PNIEC).

Italy has pledged to increase the share of renewables to 55% of power generation by 2030. Wind capacity will double to 19 GW while solar capacity will rise from 22 GW to 52 GW, according to the PNIEC.

Terna's investments will strengthen the power links between the south of Italy, where renewable energy output will be higher, and the north, where there is more sustained power demand, Terna said.

The grid operator will also upgrade connections between Italian islands and the mainland and build a new 1 GW interconnector with Switzerland as well as a 500 MW subsea link to Greece.

The first projects will include a new 380 kV power line between Bologna and Florence provinces in north-central Italy and the first high-voltage connection in western Sicily that will support renewable energy projects. Later projects will include the Adriatic Link, a 1 GW subsea cable between the Abruzzo and Marche regions on Italy's eastern coast that will link up more solar and wind capacity in the south with large consumption centres in the north.

"The pursuit of the objectives of the energy transition requires an effort in terms of planning, simplifying authorisation procedures and the construction of infrastructures that are unprecedented in the most recent decades of Italian history," Terna said.