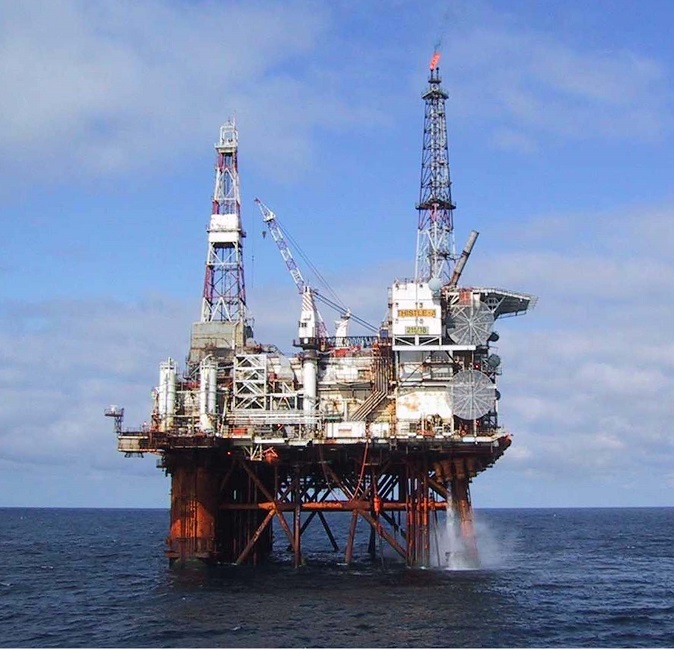 Cerulean is targeting oil platform customers for what could be the world's largest floating wind project. (Image credit: REUTERS)

Last month, developer Cerulean Winds said it had submitted plans to the Scottish government to build 3 GW of floating wind capacity that would power the majority of the UK's oil and gas platforms and produce green hydrogen.

In the largest ever floating wind project, Cerulean has applied for seabed leases west of Shetland and in the Central North Sea and requested a streamlined regulatory process. If approved, the developer aims to reach financial close in Q1 2022 and install around 200 of the latest large-scale turbines in 2024-2026.

The 10 billion pound ($13.8 billion) project would be based on direct power purchase agreements (PPAs) with platform operators, avoiding the need for state subsidies and allowing faster buildout of UK floating wind capacity, Mark Dixon, a founding director of Cerulean Winds, told Reuters Events. The arrays would help the platform operators meet their targets to cut emissions by 10% by 2025 and 25% by 2027, set out in the government's latest North Sea Transition Deal.

The use of UK subsidies such as the widely-used contract for difference (CFD) scheme would have been “time consuming and potentially restraining,” Dixon said.

Already a leader in conventional offshore wind, the UK aims to build 1 GW of floating wind by 2030 but experts say this target should be doubled.

If realised, Cerulean's project would surpass the UK target years ahead of schedule and reveal the economies of scale available to floating wind developers.

Cerulean plans to build three wind farms of capacity 1 GW to serve oil and gas platforms in the West of Shetland, Moray Firth and Central Graben areas. The total power demand of the facilities is around 850 MW and the balance would be used to supply onshore hydrogen production facilities. Assuming a load factor of around 60%, as much as 1 GW could be used for hydrogen.

By targeting remote oil and gas operators, Cerulean can deploy floating wind technology that is still at a relatively early stage of maturity on a large scale, without subsidies. Floating wind costs are currently far higher than fixed-bottom offshore wind but costs will fall as larger projects are brought online.

The platform operators currently use gas-fired power generation and the cost of power from the Cerulean project would be lower, Dixon said. The operators currently pay 70 to 130 pounds per MWh for gas-fired electricity, depending on whether the gas is sourced on site or imported, and the carbon price, he said.

In Norway, Equinor is already building an 88 MW floating wind farm to serve the Gullfaks and Snorre oil and gas platforms.

Due online in 2022, the 5 billion Norwegian crown ($582 million) Hywind Tampen project is set to become the largest floating wind farm to date and follows an earlier 30 MW project developed by Equinor in Scotland. Enova, the Norwegian state fund, has agreed to fund 2.3 billion crowns towards the project.

By using a streamlined leasing process that focuses on the decarbonisation of oil and gas facilities, Cerulean may also avoid the aggressive bidding seen recently for leases for grid power supply. In March, Crown Estate Scotland increased the price cap for seabed licences in the ScotWind tender by 10 times to 100,000 pounds per square kilometre, after surging demand hiked prices in England and Wales.

"The process is expected to have a competitive element but one that is very different to the ScotWind round, whose primary purpose is large-scale supply to the grid onshore,” Dixon said.

There are many other opportunities for direct corporate electricity supply from UK offshore wind farms, Dixon noted.

"Along the east coast of the UK are many industrial sites that have a combination of energy requirements, both direct electricity and also other energy carriers such as hydrogen for high temperature and other industrial processes," he said.

A key challenge for Cerulean will be to ensure the PPA's are bankable, Tom Whittle, Asia Pacific Regional Director at Offshore Wind Consultants, told Reuters Events.

"For huge investments like offshore wind farms, the PPAs are typically with state-backed entities, whereas with the Cerulean model it would be with the oil and gas asset operators," he said. "Because the PPA would likely need to be for 15 years plus, the creditworthiness of the off-taker is key."

Investment banks Societe Generale and Piper Sandler are advising Cerulean on the project and Dixon is confident the developer will be able to source sufficient debt and equity.

On June 30, Cerulean announced it had selected US group NOV to supply its semi-submersible substructure and mooring systems.

“A key bankability requirement for a market-funded construct is deliverability and this necessitates contractors to be appointed early in the project cycle,” Dixon said.

Turbine capacities are growing fast as developers look to cut costs. Cerulean plans to use turbines of capacity around 14 to 15 MW, almost double the capacity of the largest floating wind turbine installed to date.

Discussions with turbine suppliers "will be concluded in line with our financing discussions," Dixon said.

If realised, the project could be a "game changer for floating wind," Whittle said.

Alongside floating technology learnings, the project would accelerate green hydrogen applications, expanding the options for floating wind projects “away from the constraint of suitable grid connections,” he said.