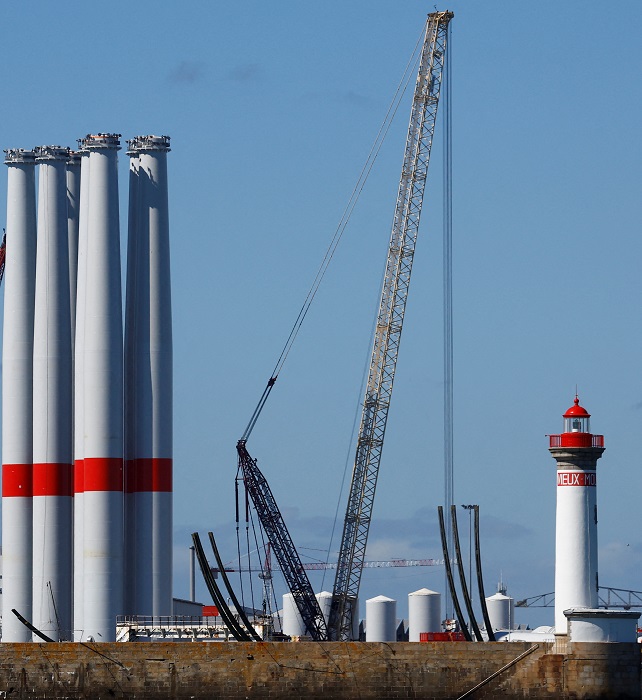 Earlier this summer, the UK government awarded its first Contract for Difference (CFD) for a floating wind project to developer Hexicon through a special pot in the UK Round 4 renewable energy auction.

Hexicon secured a 15-year contract at a highly competitive strike price of 87.3 pounds/MWh ($100.4/MWh) for its 32 MW TwinHub project, setting a benchmark for emerging floating wind technology that is in line with fixed-bottom offshore wind prices just a few years ago.

Hexicon will deploy its innovative floating foundations that allow two turbines to be placed on a single foundation at the Wave Hub demonstration site 16 km off the north coast off Cornwall. The project is expected to be completed between 2025 and 2027.

Hexicon will likely use Falmouth Port on Cornwall's southern coast to assemble the turbines on the floating foundations. Falmouth is one of the UK's deepest ports and plans to expand the quay front, “allowing them to support both the final assembly process and subsequent operations and maintenance requirements,” Brown said.

“Significant upfront investment” will be required and the project is a “key steppingstone” to delivering larger projects,” he said.

The UK Crown Estate is looking to allocate 4 GW of floating wind leases in the Celtic Sea between England, Wales and Ireland by swiftly stepping up to large-scale floating wind arrays. The UK government recently hiked its floating wind target to 5 GW by 2030 as part of wider aims to install 50 GW offshore wind by the end of the decade. Scotland will play a key role after allocating 15 GW of leases to floating wind projects in January.

"Being a first mover in the Celtic Sea will help position us for future leasing rounds in the UK,” Brown said.

The strike price achieved by Hexicon is notably competitive for emerging floating wind technologies that are yet to benefit from economies of series and scale. The 50 MW Kincardine array in Scotland is currently the largest operational floating wind farm but developers are jumping from pilot projects to larger arrays to drive down costs. The TwinHub project will be relatively close to the coast for a floating wind farm, in water depths of 50 to 60 metres, helping to minimise transport costs during installation and maintenance.

No one supplier or service provider can "deliver tangible savings without collaborating with the total supply chain," he said.

The size of the TwinHub project is in line with local capacity constraints and suited the Round 4 auction terms. Hexicon's "long term ambitions" in the floating wind market also played a significant role in its successful bid, Brown said.

"While we could take a long-term view on returns, the returns had to be sufficient to attract financial partners," he noted.

The CFD price achieved by Hexicon is “an initial line in the sand that other developers will be looking very closely at,” Edward Unwin, Floating Wind Lead at Kent, an energy sector engineering firm, said.

The price of future floating wind projects could be higher due to less favourable site conditions, Unwin said.

"Some of the bigger farms will be much more costly to build and operate, despite economies of scale, due to their remoteness from suitable infrastructure and the environmental conditions they will be in," he said.

Until now, UK offshore wind activity has mainly been concentrated in the North Sea, allowing ports and service groups to build on existing oil and gas infrastructure. Last year, the government created new offshore wind freeports in the North Sea to increase manufacturing and logistics capabilities.

The project is "kick-starting the local supply chain development and investment, which is essential to enable larger generating projects to be successful in future CFD allocations,” he said.

For larger arrays, grid upgrades will be required to transmit across longer distances, Benson said.

“Ideally, a number of port facilities in the Celtic Sea would also be developed, each with their own niche in the supply chain," Benson said.

The funding pot for floating wind in the Round 4 auction was capped and Brown predicts more projects are likely to secure CFD's in the next auction round scheduled for March 2023. To participate in the auction, developers must secure a seabed lease from the Crown estate along with a construction permit, a marine license and a grid connection approval.

In the Celtic Sea region, the Crown Estate plans to first tender for "early-commercial scale" leases of 300 MW-350 MW in 2023, followed by larger projects of up to 1 GW.

The government is shifting to more regular annual CFD auctions and developers will also benefit from regulatory reforms underway to shorten planning and grid connection timelines.

Brown urged the government to allow “as many viable projects as possible at this early stage" as the deployment of different technologies in varying ocean conditions would enable the industry to evolve quickly and efficiently.

"Floating wind is still in its infancy and there is lots of room for further innovation," he said.