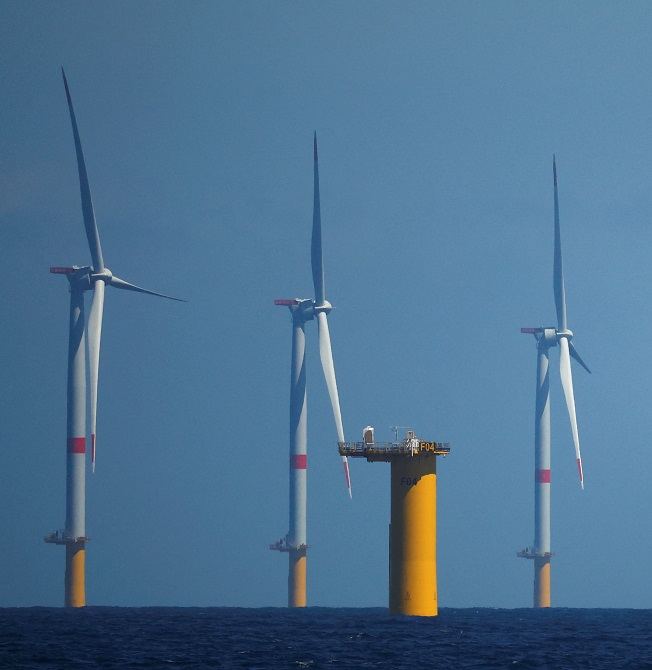 The UK awarded subsidies to five offshore wind projects in England and Scotland for a total 7 GW of capacity in its latest renewable energy funding round.

The Round 4 auction of contract for difference (CFD) subsidies allocated only 0.9 GW to onshore wind projects as well as 0.6 GW to remote island wind projects and 2.2 GW of solar, the Department for Business, Energy and Industrial Strategy (BEIS) said July 7. All of the onshore wind projects are located in Scotland, highlighting how stricter planning rules in England have crushed activity.

Offshore wind contracts were clinched at a record low price of 37.35 pounds/MWh ($44.3/MWh) by Orsted, Vattenfall, Iberdrola's Scottish Power, a partnership between EDPR and Engie and a joint venture of Red Rock Power and ESB.

The projects are scheduled to be completed by 2026-2027 and the low prices come despite the soaring cost of raw materials such as steel alongside supply chain constraints following the coronavirus pandemic and Russia's invasion of Ukraine. Offshore wind costs have fallen as developers install larger, higher efficiency turbines and leverage deployment learnings and economies of scale. The last UK auction for contract for difference (CFD) subsidies in 2019 awarded 5.5 GW of new offshore wind projects at strike prices of between 39.65 and 41.61 pounds/MWh, some 30% lower than prices awarded in 2017.

The UK had 11 GW of offshore wind capacity online at the end of 2021 and is set to lead growth in Europe in the coming years. Last year, the government created new offshore wind freeports to increase manufacturing and logistics capabilities and in April it raised the national offshore wind target to 50 GW by 2030. The UK is also aiming to be at the forefront of floating wind development. Scotland has already allocated 15 GW of leases to floating wind projects and the Round 4 auction allocated CFDs to the 32 MW TwinHub floating offshore wind project in the Celtic Sea at a price of 87.3 pounds/MWh via a funding pot ringfenced for emerging floating wind technologies.

The Round 4 auction was the first opportunity for onshore wind and solar developers to bid for CFD subsidies since the government lifted a moratorium in place since 2015.

UK electricity system operator National Grid ESO has set out its plan for a coordinated offshore wind grid to fulfil the government's ambition of 50 GW of offshore wind by 2030.

The HND plan includes the installation of 15 landing points for 18 offshore wind projects of total capacity 23 GW and new offshore transmission lines to transfer power south from Scotland to England and Wales.

Four subsea high-voltage direct-current (HVDC) links would connect the east coasts of Scotland and England to transfer power from projects allocated under the recent ScotWind tender. ScotWind allocated 25 GW of leases, including 15 GW of floating projects.

The grid plan also identifies 11 onshore transmission projects that must be accelerated to achieve the 2030 offshore wind goals. “With over 7 billion  pounds of investment in grid infrastructure in the north of Scotland alone, this blueprint can unlock Scotland’s vast offshore wind resources," Rob McDonald, Managing Director of SSEN Transmission, one of the UK's three electricity transmission owners, said.

“Key to accelerating delivery of this unprecedented programme of investment will be a robust regulatory framework that fast tracks regulatory approvals as a package of works, provides certainty of delivery, alongside reform of the planning system to expedite consenting," McDonald said.

Frank Mitchell, CEO of SP Energy Networks, said the UK government and energy regulator Ofgem are "prepared to consider new and more flexible ways in which the delivery of strategic infrastructure can be delivered, and we look forward to engaging with them further on this, in the coming weeks ahead."

A number of European countries are now developing offshore grid plans and new cross-border interconnectors to accommodate a surge in new offshore wind capacity in the coming years. Germany, the Netherlands, Belgium and Denmark recently unveiled a plan to build four artificial islands that transmit power and green hydrogen to multiple countries. The partners pledged to install at least 65 GW of offshore wind capacity in the North Sea by 2030 and 150 GW by 2050.

The UK will need to export power to achieve the government's target of 50 GW offshore wind by 2030 and offshore interconnectors could be installed in the North, Irish and Celtic seas, Nicola Medalova, Managing Director of National Grid Interconnectors, told Reuters Events last month.

National Grid has applied to UK regulator Ofgem to develop a framework for a pilot offshore interconnector within six months and install a fully commercial facility by 2030, Medalova said.

The conservative court's 6-3 ruling on June 30 restricted the EPA's authority under the Clean Air Act anti-pollution law in a case brought by the coal-reliant state of West Virginia.

The ruling comes after the Biden administration failed to gain support in Congress for the full range of climate change measures proposed in its Build Back Better budget reconciliation plan.

The Supreme Court's decision "highlights the need for swift congressional action on passing the climate provisions in the reconciliation package—which will move the nation forward on the path to cutting emissions in half by 2030 while achieving real energy independence, building good jobs, and lowering energy costs for consumers,” the American Clean Power (ACP) association said.