Developers face supply chain and permitting challenges in the first large project in Brittany but predict sharp falls in prices as Atlantic and Mediterranean markets take off. 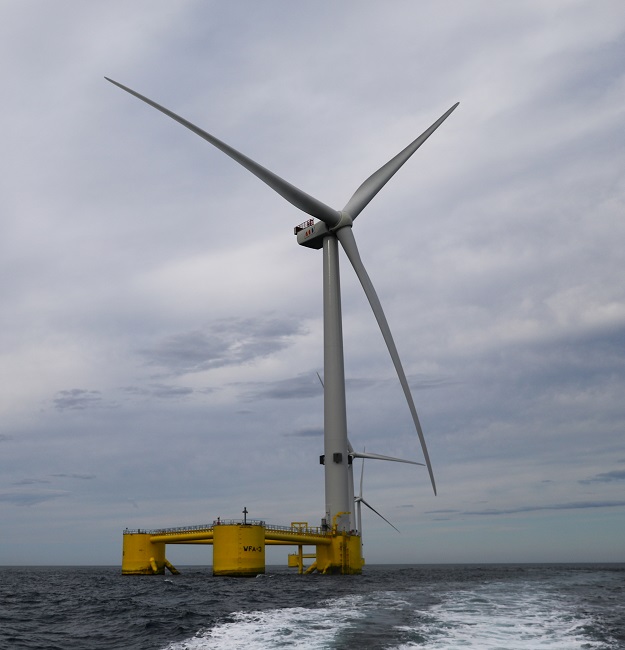 The winning developer will build a floating wind farm of capacity 230-270 MW on Brittany's Atlantic coast in north-west France. Due online by 2029, the wind farm will be five times the capacity of the 50 MW Kincardine Wind project in Scotland, the largest floating wind project installed to date.

Floating wind offers France an opportunity to establish suppliers in a fast-growing market after largely missing out in conventional offshore wind. Following years of delays, utility EDF has started to install France's first fixed-bottom offshore wind farm and there are six other awarded projects for a total capacity of 3.5 GW and a 1 GW project at the tender stage.

France installed a pilot 2 MW floating wind turbine in southern Brittany in 2018 and four pre-commercial projects of capacity around 30 MW are expected online by 2023.

The shift to a larger project in Brittany and a highly competitive tender featuring Europe's leading floating wind developers will drive down costs. The tender will allocate development rights and 15 years of guaranteed revenue.

France has capped project bids at 120 euros/MWh ($139.7/MWh) - down from 150 euros/MWh for its pre-commercial projects - but developers expect far lower prices. The cost of fixed-bottom projects plummeted after developers shifted to large projects and built out supply chains.

"Floating wind will be competitive much faster than fixed-bottom,” Geschier said.

The UK aims to install 1 GW floating wind by 2030 but could install far more as it ramps up the decarbonisation of offshore oil and gas platforms. Spain recently announced plans to build 3 GW of floating wind by the end of the decade. Developers of the first large floating wind projects face the challenge of a limited supply chain and dedicated port infrastructure.

The successful Brittany developer could encounter logistics bottlenecks around the Port of Brest, the expected launching point, Carlos Martin, CEO at BlueFloat Energy, a participant in the tender with partners Vattenfall and WPD, told Reuters Events. The port area serves many different users, including cargo shipments, ship repair, as a naval submarine base and leisure sailing and a new terminal has been developed to provide extensive inland storage and assembly options for offshore wind developers.

"Getting all the floaters in the water during the same season - as it seems to be the base case for most developers to date - does still represent a challenge, as these are large structures to assemble, launch and store," Martin said.

The tender will be managed jointly with the regional Brittany government so there will likely be local content requirements which would limit supply options, Martin added.

"Generally speaking, there is a limited number of qualified fitters and welders available in the territory and more generally in France," he said. "However, we believe France’s plans in floating wind are a unique opportunity to develop local industry, which implies investments, training of high-qualified technicians, [technology] innovation, etc."

The rocky seabed and ocean conditions at the Brittany site could pose additional installation challenges. Developers are yet to receive the detailed geophysical and geotechnical surveys of the site.

The pre-commercial floating wind projects were allocated by the French government back in 2015 and most of the delays have been related to permitting and grid connection, Aaron Smith, Chief Commercial Officer at floating wind supplier Principle Power, said.

"The government has taken steps to address these causes through marine spatial planning to select the action zones and streamlined the process for public debate, however, these [are] not fully de-risked in that they are still subject to permitting processes and environmental authorizations," he said.

The government has also clarified grid connection rules in a bid to ensure capacity is made available on time, Smith added.

"We are optimistic that these steps should reduce time to investment decision but the jury is still out," he said.

France's long Atlantic and Mediterranean coastlines offer huge potential for floating wind development. The government has set a target of 6.2 GW of offshore wind capacity by 2028 and two thirds of this could come from floating wind farms, Martin said.

After Brittany, the government plans to launch tenders for two 250 MW sites in the Mediterranean using a lower price of 110 euros/MWh to reflect efficiency gains from calmer ocean conditions. It then plans to tender for 500 MW expansions to the initial zones before moving on to larger GW-scale tenders.

The sailing distance between France's Atlantic and Mediterranean sites is around 3,000 km and this will create an "interesting fragmentation in the supply chain," Smith said.

As activity grows, separate supply chains would likely be developed in France to serve the Atlantic and Mediterranean projects as well as "other markets in [the] respective sea basins,” he said.

Dedicated supply chains could see prices for larger projects fall to as low as 30 to 40 euros/MWh, a level competitive with fixed-bottom technologies, Smith said.

"We typically expect these prices for the projects that exceed 1 GW in individual capacity," he said.