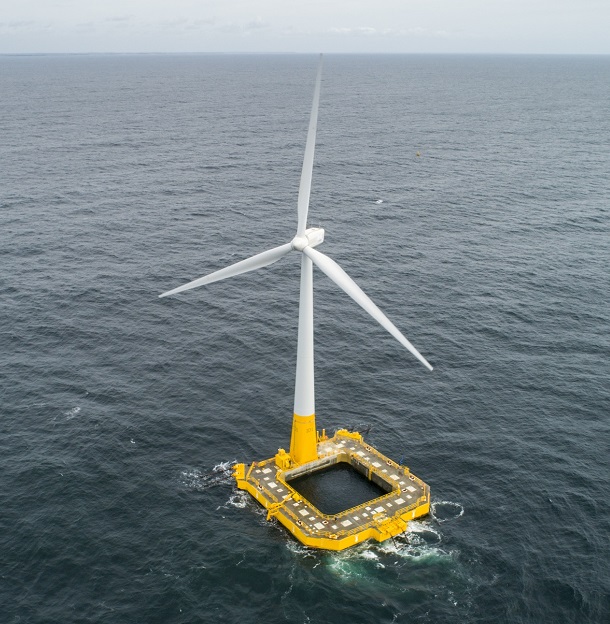 Economies of scale will be key to competitiveness and many designers lack the scale and experience to develop projects with 50 or more units, Erik Rijkers, Director of Market Development & Strategy at Quest FWE told New Energy Update.

Designers must seek partners that can provide "industrial size, project management and financial strength," he said.

Several designers have already gained the backing of large investment partners, strengthening their ability to upscale.

In one example, oil major Shell and power group Innogy agreed to take 66% and 33% stakes in the first large-scale demonstration of Stiesdal Offshore Technologies' (SOT) TetraSpar design in Norway. Stiesdal has also partnered with Magellan Wind and Copenhagen Infrastructure Partners (CIP) to develop projects off the California coast.

Swedish floating wind technology developer Hexicon has also partnered with Shell and South Korea to build the 200 MW Donghae TwinWind project in the Sea of Japan. Other collaborations include investments by European energy majors EDP and Repsol in Principle Power demonstration and pre-commercial floating wind projects.

Investors are recognizing that floating wind projects can generate a better return than the more mature fixed-bottom market, where competition between investors is greater, he said.

Interest in floating wind projects is soaring as investors look to tap into new offshore resources. Some 80% of potential offshore wind capacity, equivalent to 4 TW, is in water depths of over 60 meters, where fixed bottom designs are unsuitable, according to industry group WindEurope.

Some six pre-commercial projects for 142 MW of capacity are currently scheduled to be commissioned in Europe by 2021, Quest FWE data shows. The first U.S. floating wind project, the 12 MW New England Aqua Ventus in Maine, is scheduled online by 2022. Developers aim to build floating wind projects on the U.S. West Coast from around 2025.

Thus far, semi-submersible structures are the most popular class of floating wind design, attracting $20.4 billion of the $32.0 billion investment planned in 2020-2025, it said. 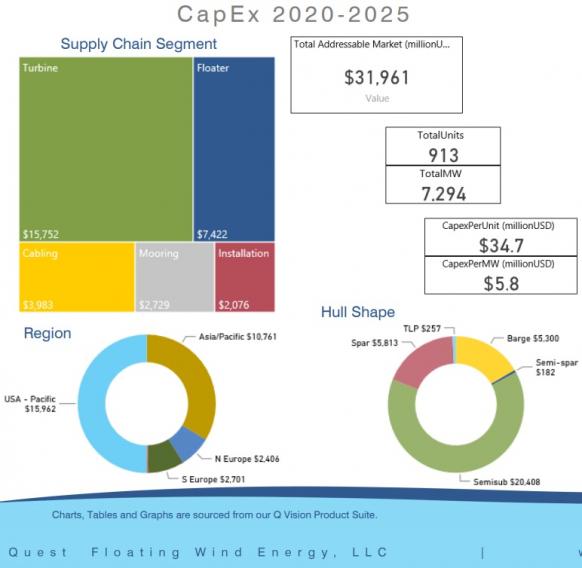 The most proven floater designs include the Equinor Hywind (SPAR), the Principle Power (PPI) Windfloat (Semisub) and Ideol Damping Pool (Barge), plus designs proven in the oil and gas industry, such as Tension Leg Platforms (TLPs) built by SBM Offshore and Stiesdal Offshore, he said.

Investors such as banks and insurance companies will only back projects able to demonstrate a real track record of development expenditure (devex) and operational expenditure (opex), plant availability and areas to improve, Geschier said.

To lure these investors, risks associated with power production records, technology reliability and O&M costs must be "acknowledged, understood and mitigated," he said.

Fast assembly processes which do not require specialised harbor infrastructure would benefit the most from economies of scale and series, he said.

Floating wind designs that can be built as close as possible to offshore installation sites and use existing harbour facilities will be at an advantage, Geschier said.

Ideol achieved 92% of order value from local content for both its 2 MW Floatgen project in France and its 3 MW Hibiki project in Japan, he said. Some 63% of all orders for the French project were placed with suppliers located within a two-hour drive of the construction site.

“The dynamic loadings need to be understood through a thorough dynamic analysis, not only for the floating structure and turbine transition piece but also including the mooring lines, connections and cabling configurations," he said.

Economies of scale and series will be crucial for floating wind to become competitive with other generation types. Floating wind concepts can potentially gain greater economies of series than fixed bottom as they require less adaptations to water depth and seabed conditions.

Larger floating wind projects will create savings across a number of components.

On the cabling side for example, bulk buying and delivery of buoyancy modules would reduce average costs, Young noted. Around 1,000 buoyancy modules could be required for a floating project with 50 turbines and array cables, he said.

According to Quest FWE, the levelized cost of energy (LCOE) of floating wind projects could fall by 30% as developers move towards large-scale industrialised projects. Industry group WindEurope predicts floating offshore wind costs could drop to 80 to 100 euros per MWh ($90-$113/MWh) for projects financed by 2025, and fall to 40 to 60 euros/MWh by 2030.

"The largest savings will lie in the manufacturing process...the floater will have to be designed with that philosophy in mind to assure a maximum efficiency of the fabrication process (volume and weight of materials, handling, automated welding etc)," he said.

Pre-commercial projects online in the coming years will provide greater insight into efficient operations at scale.

“As floating wind is still in a relatively early phase of commercialization, there is still ample room for improvement in design, production, construction, logistics and maintenance schemes," he said.