Floating wind built in series could be cheaper than fixed-bottom 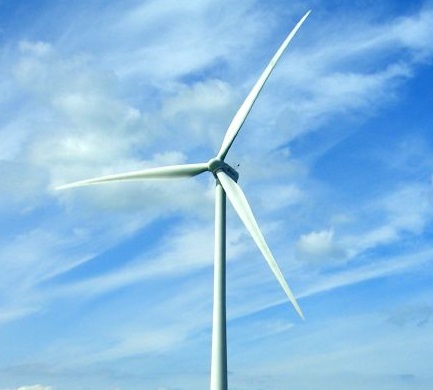 A flurry of floating wind projects will come online in 2019-2022 and developers plan to use industrialization and installation savings to cut costs.

Floating wind project activity is continuing to grow as developers seek to gain a foothold in the deep water offshore wind market.

Norwegian oil major Equinor could soon build the world's largest floating wind farm after the company gained a permit to develop a 200 MW plant near the Spanish-owned Canary Islands.

Some 12 pre-commercial projects for 334 MW of capacity are scheduled to be commissioned in Europe by 2022 and developers aim to build projects on the U.S. West Coast from around 2025.

Around 80% of global offshore wind resources, or 4 TW, is located in water depths of over 60 meters, where fixed-bottom designs cannot be used, according to industry group WindEurope.

Floating wind costs are set to plummet in the coming years as developers move from pilot projects to wider commercial deployment. With appropriate support, floating offshore wind costs could drop to 80 to 100 euros per MWh ($90-$113/MWh) for projects financed by 2025, and fall to 40 to 60 euros/MWh by 2030, WindEurope said in a recent report. 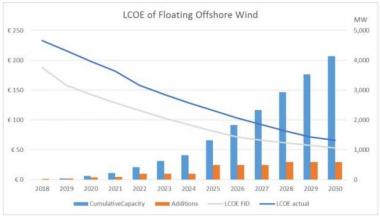 In February, oil major Shell and power group Innogy agreed to take 66% and 33% stakes in the first large-scale TetraSpar demonstration project in Norway. The 18 million-euro project will install a 3.6 MW Siemens Gamesa direct drive turbine with a 130 m rotor diameter in water depths of 200 m.

Floating foundations could be highly competitive in moderate water depths, as well as deep water areas.

“Anchors are much less sensitive to seabed conditions than piles or suction buckets,“ he said.

The installation efficiencies of the TetraSpar design will soon be put to the test, providing valuable cost data for the project partners.

Manufacturing partner Welcon is due to start the fabrication of the first prototype foundation this month and installation is scheduled for April 2020.

SOT has developed three versions of the TetraSpar design based on semi-submersible, tension leg and spar buoy configurations for water depths of 40 to 1,000m, 80 to 500m and 100 to 1000m respectively.

According to the company, volumes can be quickly ramped up based on "existing tower supply chain and existing port facilities."

The technologies used to assemble and install the TetraSpar are low-cost and readily available and can accommodate larger turbine sizes anticipated in the coming years, Stiesdal said.

The launch from quayside is performed using a semi-submersible barge, with towing carried out using an anchor handler vessel and conventional tugs, without cranes. The keel is attached to the floater for towing but ballasted when it is anchored into place.

These operations are “completely standard and are not considered to be particularly risky,” Stiesdal noted.

A similar concept would be used in most geographical areas. In more challenging sea conditions, the floater may need to be positioned vertically earlier in the process and may require larger vessels, Stiesdal said.

“It may be necessary to ballast the floater to its final draft once the depth allows it,” he said.

Experts have warned that Europe will require significant infrastructure and vessel spending to minimize the cost of floating offshore wind projects.

Quayside construction of large-scale floating wind farms requires ports to have large areas for component set down and production lines, and an area for wet storage of assembled units, according to a recent study commissioned for the UK's Carbon Trust.

Only a few ports in Scotland, Norway and Spain are currently suitable for wider floating wind deployment, the study by LOC Renewables, WavEC and Cathie Associates for the U.K.'s Carbon Trust, said.

Stiesdal believes the TetraSpar concept will avoid many of these spending requirements.

Foundation assembly and launch will require a flat, level area next to the quayside and a part of the area may need to be reinforced to host the turbine installation crane, Stiesdal said.

“In some ports this may require investments, but in many ports such areas exist already and will require no additional investment,” he said.