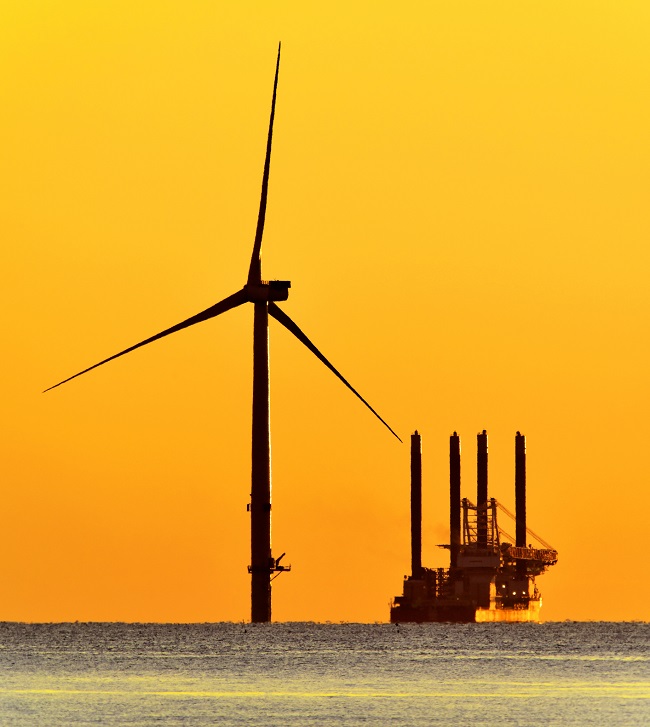 Foundation costs represent around 20 to 25% of total project capex and developers must choose between monopile, gravity-based structure, jacket and tripod designs. Steel monopiles offer the lowest capex and remain the dominant type of foundation, although many expect more gravity-based designs to be used for deeper water areas.

Monopiles are now being designed for projects in water depths of 40 to 45 meters, compared with just 30m only five years ago, he said. Suppliers believe monopiles can be deployed in water depths up to 60m and beyond these depths floating wind technology is expected to dominate.

To accommodate growing turbine dimensions, monopile suppliers have widened pile diameters to as much as 8.0m.

Specialist steel manufacturing facilities required for wider diameters are mainly located in Europe, limiting global deployment, and only a handful of hammers can handle such large diameters, Lessis said.

Combined with greater turbine efficiency, these improvements could see the cost of manufacturing and installing foundations fall by an average of 20% per MW over the next five years, Nieto said.

“The type of claims that we would see as a result of inadequate foundations would take years to develop, so any problems may take a long time to reveal themselves,” Bates warned.

GCube is currently analysing the design life of larger turbine models and foundations, in particular for longer monopile lengths in deeper water areas.

Technology developers have reduced the thickness of monopiles and corrosion could be an issue, Bates said.

“They are maximum 150mm thick, and corrosion can reduce this by as much as 1mm a year… even minor differences could result in the decommissioning of the turbine,” he said.

The installation of larger turbines could potentially lead to metal fatigue issues in the future, Bates said.

“In the past we have seen slight losses of verticality with grouting failures, but only very rarely…if monopiles are used for bigger turbines, the risk of these failures does increase. This is particularly the case in zones with a high level of seismic activity, such as Taiwan and Japan,” he said.

Studies have shown that some foundation designs have high redundancy that could be reduced while maintaining required safety levels, Lessis said.

Larger turbines can be accommodated without a linear increase of foundation size and weight, he said.

"Currently, code guidance and assumptions are largely based on tests that, on some occasions, are not considered representative of the current foundation sizes," Lessis said.

“The industry has recognized this, with new research taking place aimed to optimize the design assumptions,” he said.

Some developers are considering using designs with subsea joints to benefit from modular manufacturing and assembly processes, Lessis said.

This approach reduces the weight of installed sections, potentially eliminating the need to upgrade installation vessels for larger structures.

Other non-conventional solutions being studied include hybrid steel-concrete foundations to reduce materials costs, as well as alternative designs such as “three-legged solutions” that can offer significant weight and cost savings, or “twisted Jacket” designs that can simplify installation, Lessis said.

Digital twins can be used to assess foundation design parameters or installation procedures at a relatively low cost, Martins said.

“There are certainly various initiatives happening in this space… We see start-ups, designers, installers, [research and development] organizations and developers taking this forward,” he said.

Improved practices have reduced foundation installation durations to just over one day, from two to three days previously, Martins said.

The offshore wind industry could be moving towards single-lift installations where the whole structure is installed in one process, but this process is yet to be commercially proven for fixed-bottom projects, Lessis said.

Full assembly onshore and single operation crane vessel installs could achieve significant cost reductions for larger turbines, according to a study by the University of Delaware, U.S.

The use of a tripod jacket with suction buckets and full-assembly onshore could reduce capital costs by up to 37% compared with piled jacket systems available in 2017, it said.