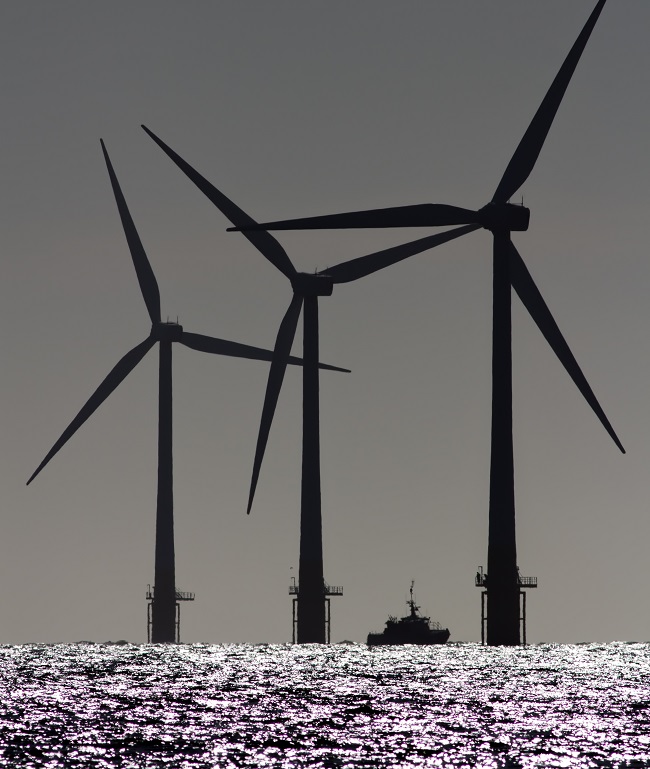 The Windplus consortium is owned by Portugal's EDPR (54.4%), France's Engie (25%), Spain's Repsol (19.4%) and US group Principle Power (1.2%). The WFA project has also received almost 100 million euros of loans from the European Investment Bank, the European Commission’s NER300 Programme and the government of Portugal.

WFA will be installed 20 kilometers off the coast of Viana do Castelo, Portugal. Final assembly is being performed at Ferrol harbor in north-west Spain and the first turbine unit will be towed to the project site in September. The remaining two turbine units will be installed at the site before the end of the year.

The project represents a significant scaling up of Principle Power's floating wind design and a key step towards wider commercial deployment. Larger, higher efficiency turbines are driving down costs and floating wind structures will need to accommodate growing turbine dimensions to become competitive.

Floating wind costs are set to plummet in the coming years as developers move from pilot projects to wider commercial deployment. Rapid growth in the fixed-bottom offshore sector has shown how technology improvements, installation learnings and economies of scale can slice costs and stoke demand. 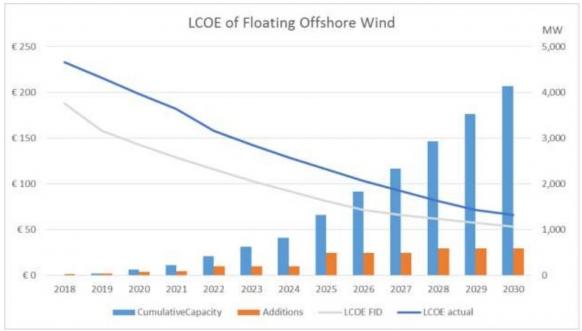 Principle Power is currently developing a range of pre-commercial projects to boost the competitiveness of its design, including the 24 MW Les Eoliennes Flottantes du Golfe du Lion (LEFGL) on France's Mediterranean coast, due to be commissioned in 2021, and the 49 MW Kincardine project in the UK, scheduled online in 2020.

A key frontrunner in floating wind technology, Principle Power accounts for 22.21% of capital expenditure in the floating wind industry to date, according to a report published by the Quest consultancy in June. The U.S. group's commercial projects include the proposed 100 to 150 MW Redwood Coast facility in Northern California.

Fixed-bottom offshore wind costs have plummeted but floating wind developers are chasing the much larger deepwater market. An estimated 80% of offshore wind resource, some 4 TW of capacity, is in water depths of over 60 meters, where fixed bottom designs are not suitable, according to industry group WindEurope.

Principle Power’s WFA platform will be installed in water depths of 85 to 100m.

Once assembled, WFA will be towed some 200 nautical miles to the site, where it will be attached to pre-installed mooring systems.

Principle’s semi-submersible architecture is designed to be inherently stable without requiring mooring to balance the system.

The structures can be deployed in water depths of over 1,000 m, according to the company.

For WFA, existing port side and vessel facilities were used to minimise costs. The use of tug boats and anchor handling tug supply vessels removes the need for specialist offshore installation vessels.

“One of the key reasons Principle Power’s WindFloat technology is a great fit is that we can bring components into the harbor, do fabrication and assembly in the harbor, and then tow the units out with conventional tugboats for final deployment,” Marshall said.

Pre-commercial floating wind projects installed in the coming years will help to accelerate cost reductions and boost investor confidence in the sector.

Principle Power expects pre-commercial testing to demonstrate “significant” savings on the levelized cost of energy (LCOE) compared with earlier models, the company said. Pre-commercial testing will include "quick disconnect" operations and maintenance (O&M), in which the facility is towed to shore to perform maintenance, avoiding the high cost of heavy lift vessels.

The first commercial arrays will rely on fabrication sites in multiple locations for the procurement of the main subsystems, Banister said. As project pipelines grow and developers seek greater efficiency, the fabrication and assembly network could evolve into regional supply hubs, he said.

“In the future the supply chain might be more organized with centralized fabrication facilities," Banister said.

These facilities could cover large market areas such as the North Sea, the Mediterranean or the U.S. western seaboard, he said.