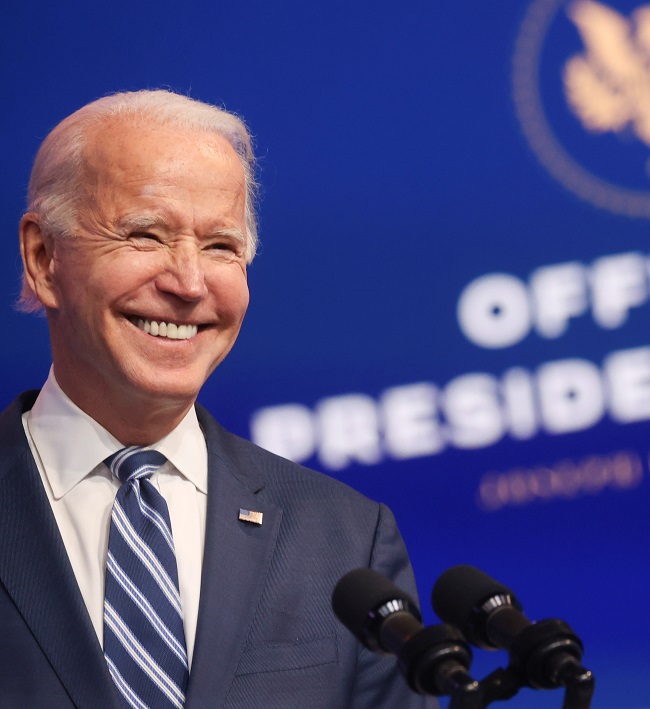 Biden victory sets up surge in US wind, solar spending

Joe Biden's victory in the US presidential election on November 3 is set to accelerate the deployment of wind, solar and energy storage in the coming years, slash carbon emissions and place clean energy at the heart of US job growth.

The Democrat President-elect has pledged to spend $2 trillion on clean energy and sustainable infrastructure in his first four-year term and achieve net zero carbon emissions in the power sector by 2035. Biden wants the US to become entirely carbon neutral by 2050.

The US power sector emitted 1.6 million tons of CO2 in 2019, around a third of total US CO2 emissions, data from the US Energy Information Administration (EIA) shows. Some 60% came from coal-fired power generation and 38% from gas-fired plants.

Biden proposes to reform and extend tax incentives that support clean energy and implement a technology-neutral "Energy Efficiency and Clean Electricity Standard (EECES)" for utilities and grid operators. Wind and solar activity was already strong after years of cost reductions and rising carbon reduction targets set by corporations and utilities. To meet the net zero target, Biden will also support the use of existing hydroelectric and nuclear facilities and the development of energy storage, advanced nuclear reactor and carbon capture technologies. He has also pledged to invest in 500,000 electric vehicle charging stations to accelerate the shift away from fossil fuels.

Biden will look to implement a suite of regulation changes to complement the financial support. The extent of these reforms will depend on the result of Senate elections.

The Democrats held the House of Representatives but the control of the Senate is on a knife edge. The Democrats and Republicans each hold 48 seats in the Senate and a run-off in the state of Georgia on January 5 is set to decide the balance of power after the candidates failed to win a majority on November 3. Republicans are expected to win the remaining two seats in Alaska and North Carolina and if Democrats win both seats in Georgia, Vice President Kamala Harris will have a tie-breaking vote.

"We look forward to collaborating with his administration and Congress as we work together to shape a cleaner and more prosperous energy future for America," AWEA said in a statement.

"The President-elect and his team have laid out an ambitious, comprehensive approach to energy policy that recognizes renewable energy’s ability to grow America’s economy and create a cleaner environment, while keeping electricity costs low and combating the threat of climate change," it said.

Global renewable energy installations are set to hit a record level of almost 200 GW this year and represent around 90% of all new power additions, the International Energy Agency (IEA) said in its Renewables 2020 report published November 10.

Wind installations are expected to hit a record 71.3 GW, the Global Wind Energy Council (GWEC) said in a separate report.

"Renewable power is growing robustly around the world this year, contrasting with the sharp declines triggered by the COVID-19 crisis in many other parts of the energy sector such as oil, gas and coal," the IEA said.

In the U.S. and China, annual wind and solar additions are forecast to jump by 30% as developers race to take advantage of expiring incentives, the agency said.

Global additions will rise further next year, boosted by growth in Europe and India as activity recovers from the impact of COVID-19, it said. Cost reductions and sustained policy support will continue to drive strong growth in renewables in the medium-term, IEA said.

If implemented, the US clean energy plan proposed by President-elect Joe Biden would lead to a faster deployment of solar PV and wind and a faster decarbonisation of the global power sector, the agency noted.

Iberdrola plans to invest 75 billion euros ($89.0 billion) in 2020-2025, of which half will be spent on renewables, doubling its installed capacity to 60 GW, the Spanish power utility announced November 5.

By 2025, Iberdrola aims to achieve 26 GW of installed onshore wind capacity, 4 GW of offshore wind, 16 GW of solar and 14 GW of hydro, the company said.

Most of the remaining investment - some 27 billion euros - will be spent on power networks.

"Networks will be critical to the electrification of the economy and the industrial revitalization of all territories," the company said.

Iberdrola has been on an acquisition spree this year. Last month, the company announced it would acquire US utility PNM Resources through its US subsidiary Avangrid, expanding its regulated asset base and becoming the third-largest renewable energy company in the US.

Iberdrola plans to spend 10 billion euros in 2020 and the PNM buyout is Iberdrola's eighth corporate acquisition since the start of the COVID-19 pandemic. Previous acquisitions were in France, Scotland, Sweden, Australia, Japan and Brazil. By the end of September, the group had spent 6.6 billion euros, a rise of 23% on a year ago. Net profit in January-September climbed by 4.7% to 2.7 billion euros.