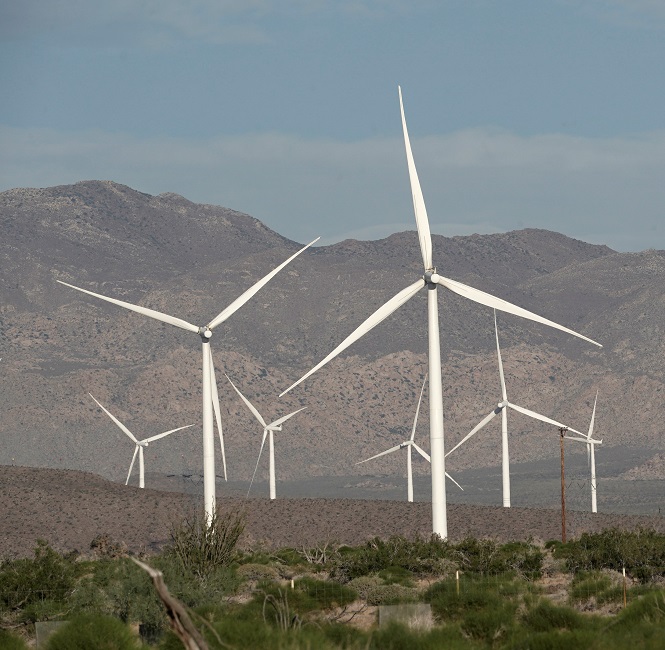 Around half the wind projects proposed in California include storage. (Image credit: REUTERS/Bing Guan)

California's vast solar fleet is unable to meet power demand after sundown, requiring significant gas-fired generation. Peak power load surpassed 46 GW during the heatwave and California has around 28 GW of installed solar capacity and 7.0 GW of wind capacity. The state has over 4 GW of pumped hydro storage and battery storage is expected to soar from around 500 MW currently to around 2 GW by the end of next year as utilities strive to meet mandated procurement deadlines. Storage capacity will continue to hike in the coming years as developers install larger facilities.

Wind developers see the coupling of storage as a way to build new projects in California, data on interconnection queues show. Around 11 GW of US wind plus storage projects were queueing for capacity at the start of 2020, of which around half were in California, the Lawrence Berkeley National Laboratory (Berkeley Lab) said in a recent report.

US hybrid capacity in interconnection queues Some 50% of all wind projects in the CAISO interconnection queue are hybrid storage proposals, compared with less than 6% in other US markets, Wiser told Reuters Events.

“Because [price spikes] are sizable and recurring they are a perfect application for storage – whether paired with solar, wind, or built on a standalone basis,” he said.

To date, there are 13 wind plus storage projects online in the US, mostly in the eastern PJM and Texas ERCOT markets.

These facilities have an average storage duration of 0.6 hours and have typically been used to provide ancillary services to the grid, such as frequency regulation, rather than peak shifting to capture higher wholesale revenue prices.

For example, E.ON retrofitted two 10 MW lithium ion energy storage systems at the operational Pyron and Inadale windfarms in West Texas. The storage plant allows E.ON to bid into the Fast Responding Regulation Service Up and Down (FRRS) market any time of day, responding to events such as a large generator trip, the company told Reuters Events.

California interconnection queue data does not include storage durations but Wiser suspects wind plus storage developers will also seek to provide energy arbitrage and capacity value.

This could mean "storage durations that are more likely in the circa 4-hour range," he said.

US solar plus storage developers have opted for between two and five hours of storage capacity, to cover evening peak demand when solar resources wane, Berkeley Lab data shows.

Details on the proposed wind plus storage projects in California are limited and it is not yet clear if any will be completed.

California utility Pacific Gas and Electric (PG&E) is currently involved in numerous large-scale storage projects, but is yet to receive a formal wind plus storage proposal, the company told Reuters Events.

Google recently signed a large offtake deal with NV Energy for a large solar plus storage plant in Nevada that will help feed its growing demand requirements, but is yet to support a wind plus storage project.

“It is mainly due to the lack of opportunity, rather than interest," a Google spokesperson said. "Wind storage is less mature from an application and interconnection perspective. But as the market will rapidly evolve, Google expects to add energy storage across their portfolio in general."

Wind plus storage developers face additional project risks which could be hindering deployment. The coupling of wind plus storage facilities must be fully optimised in order to capture the increased revenue opportunities provided by battery plants. Developers must also factor in local and regional demand requirements, in addition to local wind resources, when selecting the site. In some markets, regulatory uncertainty over financial incentives awarded to storage capacity can hinder deployment.

A greater risk for wind plus storage in California could be the surge in new storage capacity expected online in the coming years.

“As those plants are built they will begin to suppress wholesale prices during the early evening net-load ramp," Wiser said. "This will, on the margin, make storage less valuable all else being equal."