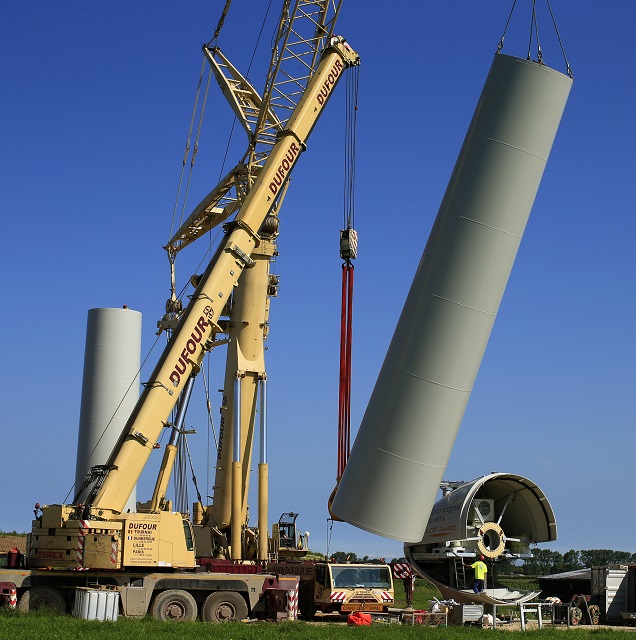 The US wind sector remains on track for record installations this year. (Image credit: REUTERS/Benoit Tessier)

US wind developers defied COVID-19 challenges to install a record 2.5 GW of wind power in the second quarter of 2020, the American Wind Energy Association (AWEA) said in its latest quarterly market report. In the first quarter, US wind installations doubled on a year ago to 1.8 GW.

US wind construction activity is soaring as developers race to meet end-of-year deadlines for production tax credits (PTCs). Most of the new capacity was scheduled online in Q4 2020 but COVID-19 restrictions have hampered many projects. The U.S. Treasury and Internal Revenue Service (IRS) has relaxed tax credit deadlines by a year which will see some projects spill into 2021.

GE Renewable Energy has installed 63% of US wind capacity so far this year, while Vestas has installed 19%, Siemens Gamesa 14% and Nordex 3%, AWEA said. Last year, GE expanded its wind market share from 40% to 45% while Vestas' share slipped from 38% to 33%. Total wind capacity in construction or in advanced development dipped by 2% in Q2 to 43.6 GW, but remains some 4% higher than at the same point last year, AWEA said.

AWEA is seeking direct pay provisions to alleviate this constraint, it said.

California's power agencies will review power procurement plans and demand forecasting processes after a heatwave led to rotating power interruptions across the state.

California has around 28 GW of installed solar capacity, including 13.4 GW of utility-scale, and 7.0 GW of wind capacity. Peak power load surpassed 46 GW during the heatwave. "Our organizations want to be clear about one factor that did not cause the rotating outage: California's commitment to clean energy," the California Public Utilities Commission (CPUC), CAISO and California Energy Commission (CEC), said in a joint letter to Governor Gavin Newsom on August 19.

"Clean energy and reliable energy are not contradictory goals," they said.

"Our changing electricity system may need larger reserves," they said.

Last year, the CPUC ordered 3.3 GW of new capacity to come online by 2023 after identifying peak demand is occurring later in the day.

“The wind is always blowing somewhere—in California, throughout the West, and offshore. And we’ve seen this week that there is still plenty of wind power available in New Mexico, Wyoming, and other states, provided we have the transmission in place to bring this power online when we need it," AWEA said.

State authorities should also accelerate the development of offshore wind, which could provide over a third of California's peak energy demand, the industry group said.

Valued at over $32.5 million, the lease agreements crystallise earlier commitments by the developers and take into account the latest project schedules.

Vineyard Wind 1 is the US' first large-scale offshore wind project and was delayed after the US Bureau of Ocean Energy Management (BOEM) expanded the scope of its Environmental Impact Statement. A joint venture of Iberdrola subsidiary Avangrid and Copenhagen Infrastructure Partners (CIP), the project will consist of two 400 MW phases that were originally scheduled online in 2022 and 2023 but are now expected later.

The 800 MW Mayflower wind project is jointly-owned by oil major Shell and European utility EDPR and is due online in 2025.

"Both leases contain limited provisions for shared use during limited time periods at the beginning and end of the lease period to provide flexibility in project schedules," the Massachusetts Clean Energy Center (MassCEC), operator of the New Bedford terminal, said in a statement.