A lack of supportive tenders is endangering the CSP industry's quest for lower costs and its leading position in overnight renewable power, a team of researchers told Reuters Events. 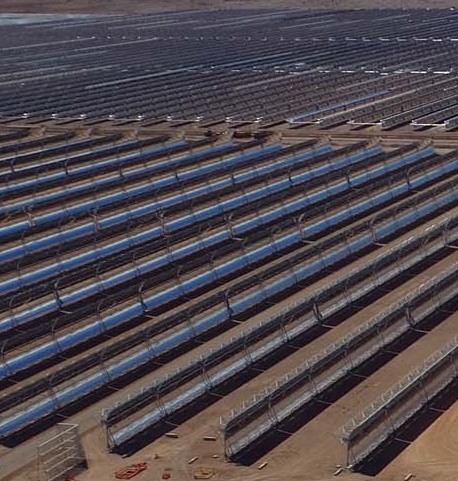 Only a handful of CSP projects are set to come online in the next few years and scale is needed to cut costs. (Image credit: Abengoa)

CSP with thermal energy storage is more cost competitive than PV plus batteries for more than around three hours storage, but the faster deployment of PV and batteries in the coming years will erode this advantage, a group of researchers at TU Wien Energy Economics Group (EEG) and Institute for Advanced Sustainability Studies (IASS) Potsdam said in a new report.

The research team studied the impact of industry developments on the competitiveness of CSP plus storage, compared with PV plus batteries. The team looked at current costs and projected medium and low cost scenarios out to 2050.

CSP build activity has slowed and without a sharp pickup in orders, the long-term competitiveness of the CSP industry could be damaged, Richard Thonig, research associate at IASS and co-author of the report, told Reuters Events.

"What is missing now is a short-term pipeline ideally in the GWs of size, to realize the expected cost reductions," Thonig said. "Cost reduction follows deployment and the economies of scales in modern manufacturing in large-scale factories."

An early mover in CSP, Abengoa has supplied technology, installed or operated around 2 GW of CSP plants- a third of global installed CSP capacity - including 730 MW in Spain.

Technology and deployment learnings have enabled CSP developers to carve out a competitive advantage for evening and overnight power dispatch.

However, if PV costs continue to fall at a fast rate over the long term "they capture most of the CSP niche even if CSP also progresses fast," the researchers warned in their report. The tipping point when CSP plus thermal energy storage becomes more competitive than PV plus batteries is currently between 2 and 3 storage hours, the report said. If PV and CSP costs fall at a "medium" rate over the long term, this tipping point moves out to four hours and under a “low” cost scenario, the tipping point shifts to 10 hours, it said. Currently, the optimal storage durations for CSP tend to be around 8 to 14 hours, depending on solar resources and the market need.

The low cost scenario used in the report assumes PV costs fall by 56% and lithium-ion battery costs drop 80%, while the cost of CSP solar field and receivers drops 50%, the CSP storage system drops 75% and the CSP power block 20%. The researchers took into account expected advances in technology.

The study assumes global PV prices will fall by around 20 to 30% for each doubling of global capacity. PV capacity is expected to increase by around 20% per year, implying a doubling of capacity every 3.5 years.

Many factors could influence the long term cost trends of PV and batteries, Franziska Schoniger, a researcher at EEG and co-author of the study, noted.

Battery costs are in an earlier phase of development and costs will depend on the deployment of electric vehicles and consumer electronics. Both PV and battery costs could be impacted by greater recycling of products and secondary applications, Schoniger said.

"There is the need to establish a well-designed and widespread recycling infrastructure for batteries...how this infrastructure is designed will also have an impact on the price," she said.

The most pressing need for CSP developers is a sufficient pipeline of projects. CSP companies have continued to refine their technology and a new generation of higher efficiency plants is emerging but slower deployment rates for CSP in the coming years could hamper cost reduction objectives, Schoniger said.

A select few large projects are being built but some promising markets like South Africa rolled back their CSP plans.

"We do not see a 20-30% overall growth of new stations per year. We see something like 200 MW-500 MW per year and no new large market is in sight," Schoniger warned.

"There is a real risk that CSP is going to stay more or less with its current cost, even though innovative new designs have been suggested," she said.

Increasing involvement by Chinese supply firms is helping to reduce industry costs, but more tower projects must be built and operated to generate economies of scale and lower financing costs, Schoniger said.

A pipeline "in the order of GWs" is required to noticeably reduce costs, she said.

A key question for medium-term cost reductions is how quickly third-generation plants can be brought to market.

These plants achieve higher temperatures and higher energy conversion efficiency but widespread commercial deployment is many years away.

One next-generation developer, Vast Solar, has developed a high-temperature modular sodium loop CSP plant and is looking to build its first commercial-scale plant at the mining town of Mount Isa in Queensland, Australia. The company has operated a 1.1 MW pilot CSP plant in New South Wales since 2018.

Many large-scale CSP projects are now incorporating PV technology to reduce project costs, using the PV section to supply power during the daytime and the CSP plant to deploy power at night.

The 800 MW Noor Midelt I CSP-PV project in Morocco consists of 200 MW of parabolic trough, 600 MW of PV and five hours of energy storage using thermal energy and battery technology. The project was awarded at a record-low CSP price of 68 dirhams/MWh ($71/MWh) in 2019.

"We think hybrid PV-CSP plants will be the dominant configuration in most markets and applications," Craig Wood, CEO of Vast Solar, told Reuters Events. For its first plant in Queensland, Vast Solar is looking to build a 50 MW combined CSP-PV-gas facility.

"The obvious risk for the long-term development of [CSP] technology is that parabolic trough-PV hybrids take up what is left of the CSP pipeline," he said.

Many CSP developers also see huge growth potential in heating applications as countries look to decarbonise industry. The high temperature capabilities of CSP plants makes them suitable for industrial heat and power. In Italy, a group of companies is building a pilot high-temperature ceramic particle CSP tower plant at a pasta factory owned by Barilla. HiFlex will produce 3,360 MWh of thermal energy per year for the drying of pasta, reducing the factory's reliance on natural gas.

Policy measures should include a pre-announced schedule of power auctions, either explicitly for CSP or with design elements that value dispatchability of "several hours beyond the tipping point with PV," she said.

Dispatchable and decarbonized generation technologies will be needed to integrate large amounts of PV and wind into the power system.

"CSP has the capability to dispatch clean energy whenever is required and with the same quality (synchronous generation, frequency control, …) than any conventional power generation plant," Mendez Trigo noted.

"Proper grid planning targeting the lowest cost system is what all policy settings should be targeting," Wood said. "When this is done correctly - Spain is a leading example - a significant role for CSP emerges based on its low marginal storage cost and the additional roles it plays in the grid."

Spain plans to reignite its CSP market this year and tender for 600 MW of capacity by 2025 under a framework that values dispatchability.

"The [CSP] industry is ready to go for large-scale deployment," Schoniger said.

"If this happens, CSP will play a large role - if it doesn't happen and many of the now experienced companies leave CSP behind it will be much harder to restart the industry in 10 to 20 years when the demand for dispatchable, renewable power, large storage, renewable heat and solar hydrogen will be larger."