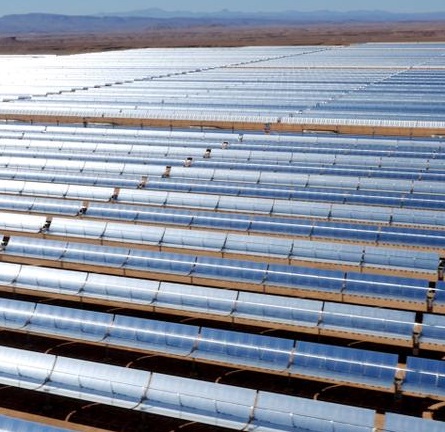 ACWA Power has opted for 600 MW of parabolic trough capacity at its 950 MW CSP-PV project in Dubai. (Image credit: Masen)

Shanghai Electric is the contracted Engineering, Procurement, and Construction (EPC) supplier and the company has already begun limited works to meet a tight schedule.

Project financing is expected to be closed in the coming weeks and the plant is expected to be brought online in phases in 2021-2022, Rajit Nanda, Chief Investment Officer (CIO) at ACWA Power International, told conference attendees.

"Full notice to proceed is expected before Christmas," he said.

The $4.4 billion cost of Noor Energy 1 will be met by $2.9 billion of debt and $1.5 billion of equity. DEWA is to provide $750 million, half of the project equity. Of the remaining half, ACWA Power will provide 51% and China's Silk Road Fund 49%. Over 70% of the project debt will come from Chinese banks including Industrial and Commercial Bank of China Limited (ICBC), with the remainder supplied by international and regional banks.

The 35-year PPA for the project is around 10 years longer than typical arrangements, spreading the initial investment across a longer period and reducing the annual cost of capital.

The combined technology design optimizes storage capacity in order to produce power through the night and complement rising regional PV capacity. DEWA plans to build 5 GW of solar capacity by 2030, most of which will be PV.

For the CSP generation, tariffs are set according to time of supply.

There will still be "limited" dispatch of CSP during the summer daytime, when demand is highest, to recover some of the costs, he noted.

"From 4 PM onwards until the next day morning at 10 AM you get the full recovery of the tariffs, that's where storage is very critical-- you are able to fully optimize the storage and spread it over the maximum amount of generation," he said.

The parabolic trough section will produce 74% of total power volume, while the tower will produce 14% and the PV compartment 12%, Nanda said.

In terms of revenues, 80% will be generated by the parabolic trough plant, 15% from the tower and 5% from the PV plant, he said.

"The moment trough was brought in as a larger part of the overall hybrid, it brought about a completely different level of comfort," he said.

"It's quite an exciting combination of technologies that really responds to the meteorological conditions and the demand curve of Dubai," he said.

Shanghai Electric's experience as a plant supplier as well as an EPC contractor will allow it to drive for efficiencies in the supply chain. Shanghai Electric is one of China's top five power generators and has a total installed capacity of over 107 GW, including 5 GW of solar power and 10 GW of wind.

"What we are seeing increasingly is sponsors and developers going down the value chain and speaking to the manufacturers themselves and squeezing out margins there," he said.

"We believe that the success of this [pilot CSP] program will result in further cost reductions in CSP technology," Moulik said.

Economies of scale on the Noor Energy 1 project will create additional project management and logistics savings.

"It's not only a matter of squeezing the suppliers, it's a matter [of thinking] a little bit out of the box and doing things different," she said.

Shanghai Electric is faced with the challenge of minimizing costs while also meeting a demanding construction schedule.

ACWA Power has issued Shanghai Electric a limited notice to proceed (NTP) and the entire plant is scheduled to be completed within four years of NTP, Nanda told the conference.

The first parabolic trough plant will go into commercial operation 32 months after NTP, and this will be followed by the commissioning of the tower plant at 35 months. The second and third parabolic troughs brought at 40 months and 48 months, Nanda said.

The combination of multiple plants will bring about construction synergies, but will also present logistics challenges that will put pressure on the project schedule, Una warned.

"We think we will need more than 30 containers per day arriving at the site, which means we have to have everything very well-planned, in terms of storage area, transportation, port facilities, etc," she said.