Capex of modular CSP plants could halve if 1 GW deployed 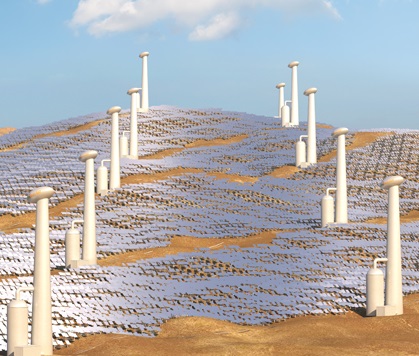 Supported by the Moroccan Agency for Sustainable Energy (MASEN), the project marks a significant step towards commercial deployment of 247Solar's modular plant technology.

The plant will allow 247Solar to prove the performance of a fully-integrated system and produce operational data that will boost investor confidence in the technology, Bruce Anderson, CEO of 247Solar, told New Energy Update.

The 247Solar design features multiple high-temperature and modular build advantages and the company is targeting a CAPEX of $5,900/kWe for the first 10 MW commercial system.

247Solar plans to increase the module size 400kWe to 5MW "within the next few years" and 1 GW of deployment could lower the CAPEX to $3,000/kWe, Anderson said.

"Especially when we have our components mass produced in India and South-East Asia," he said. 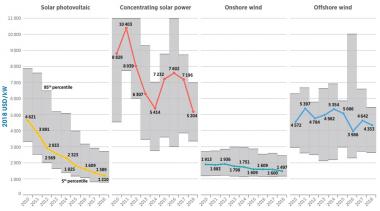 “The biggest win for CSP with smaller, modular sizes is a much larger market size due to the ability to build distributed projects near their point of use, near the offtaker,” he said.

Initially, commercial 247Solar plants would consist of modular arrays of 400kW CSP tower plants, each providing power through a small gas turbine. The height of the receivers would be 35 meters, far shorter than conventional CSP tower designs.

The receivers heat ambient pressure air to a temperature of 925 to 1000°C, which is used to drive the turbines. Current CSP tower plants use molten salt as the heat transfer medium (HTM) and storage media, which limits HTM temperatures to 565°C to avoid corrosion and decomposition.

Higher temperatures increase the efficiency of converting heat to electricity and thermal storage and a number of high temperature systems are being developed. In the U.S., Brayton Energy, the National Renewable Energy Laboratory (NREL) and Sandia Laboratories are competing for a $25 million grant from the Department of Energy to build a CSP system capable of temperatures over 700° C. Elsewhere, a new high-temperature ceramic particle CSP receiver developed by Germany's DLR aims to reach particle temperatures of over 1000° C and will soon be tested in the U.S.

High-temperature systems raise materials challenges and the 247solar design will require ceramic protection in the receiver and insulation of the ducting pathway to the turbine. The properties of air also mean it occupies more volume than conventional HTMs, requiring large ducts and power-hungry blowers.

However, the use of air as HTM has significant benefits, Anderson said.

“Air is a free HTM, the technology does not need heat exchangers and the utilization of gas turbines over steam turbines means that water requirements are restricted to heliostat cleaning, not power generation," he said.

According to Anderson, the 247Solar system can reduce water consumption by around 95% compared with some conventional CSP plants.

In addition, the design will use dry storage mediums- ceramic pellets or firebrick- and these are estimated to cost less than the state-of-the-art molten salt materials used in the latest CSP plants, he said.

The absence of heliostat foundations and cabling further accelerates construction, he said.

Modularization means project owners can start to earn revenue after commissioning the first module, while others are being built. In addition, construction teams can be redeployed at the site in series.

Vast Solar's towers are also smaller than conventional CSP designs and use a lightweight steel lattice structure. The towers are assembled on the ground, then tilted into position.

The modular tower and array layout can be constructed in parallel, at the same time as power block or storage construction, reducing total construction time to between 18 and 24 months, Craig Wood, CEO of Vast Solar, told New Energy Update earlier this year.

Startup to full power can be achieved in less than five minutes and the unit can operate at efficiencies down to 50%, he said.

The smaller size of modular CSP plants allow efficient land use and opens up siting opportunities on lower-cost hilly and irregular-shaped land.

A number of CSP developers are specialising in combined heat and power plant configurations to tap the growing demand for industrial heat from renewable sources. Industrial heat makes up two-thirds of industrial energy demand and is responsible for most of the sectors' CO2 emissions.