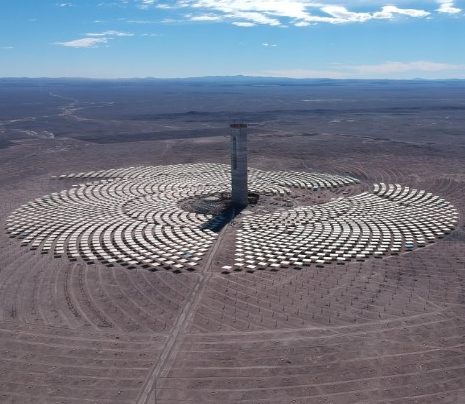 Plants such as Cerro Dominador in Chile use high-temperature towers and storage to drive down levelized costs.

Average CSP prices to fall by a half as Chile, Dubai projects near completion

The global average cost of new CSP projects is set to plummet in 2020 and 2021, based on auction and power purchase agreement (PPA) data, the International Renewable Energy Agency (IRENA) said in its latest annual Renewable Power Generation Cost report.

New large-scale projects set to come online in Chile and Dubai (see below) in 2020 and 2021 will have a dramatic impact on the average CSP price.

Based on available purchase agreements, the average CSP price is expected to drop to $94/MWh in 2020 and $75/MWh for projects online in 2021, IRENA said.

"This represents a reduction of 48% to 59%, compared to the global weighted-average project LCOE in 2019," it said. The $4.4 billion Noor Energy 1 project was awarded in 2017 at a record low CSP price of $74/MWh. The world's largest CSP project, Noor Energy 1 includes a 100 MW CSP tower plant, three 200 MW parabolic trough CSP systems, 250 MW of PV capacity and 15 hours of molten salt CSP storage capacity. Shanghai Electric is the lead construction company while the main components are being supplied by European and US firms, some using Chinese facilities.

ACWA Power signed a 35-year PPA for Noor Energy 1 with the Dubai Electricity and Water Authority (DEWA) and used a large portion of parabolic trough and PV capacity to lower the financing costs for the project. DEWA also took a 50% equity stake in the project.

IRENA compared Noor Energy 1 against the technology used for ACWA Power’s Noor II parabolic trough plant in Morocco, online since 2018, with a 25-year operation life and weighted average cost of capital of 7.5%.

Technology improvements and economies of scale were less important cost drivers, it said.

Last year, a consortium led by EDF was allocated the 800 MW PV-CSP project in Morocco at a price of $71/MWh.

Chile's EIG Atacama Management, developer of the Cerro Dominador plant, predicts it will set a new record price for CSP in a project tender later this year.