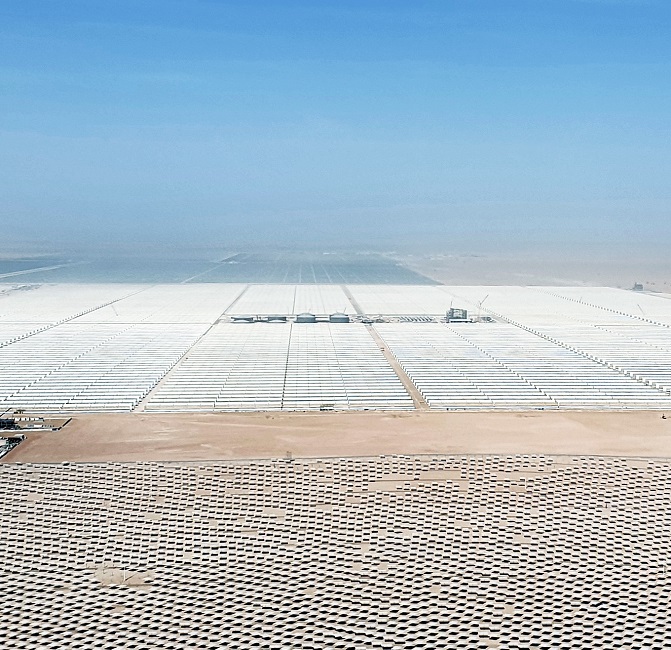 The Noor Energy 1 plant in Dubai will be the world's largest CSP plant. (Image credit: Abengoa)

Developed by Saudi Arabia's ACWA Power, the $4.4 billion Noor Energy 1 project will be the world's largest CSP plant and includes a 100 MW CSP tower plant, three 200 MW parabolic trough CSP systems, 250 MW of PV capacity and 15 hours of molten salt CSP storage capacity. Shanghai Electric is the lead construction company while the main components are being supplied by European and US firms, some using Chinese facilities.

The Dubai Electricity Water Authority (DEWA) awarded the project in 2017 at a record-low tariff of $73/MWh. DEWA is the power offtaker and acquired a 50% stake in the project. The remaining stake is owned by ACWA Power and China's Silk Road Fund. Abengoa is supplying the technology and design, engineering and construction services for the parabolic trough plants. Each 200 MW section incorporates 2,120 solar collectors, each weighing 40 tons.

To date, Abengoa has installed 1.7 GW of CSP capacity, around a third of the world's CSP fleet.

In June, Shanghai Electric and partners completed the installation of the CSP tower receiver. The 40-metre receiver increases the height of the tower to 262 m, making it the highest CSP tower in the world.

The installation of the receiver was a key project milestone and came six months after the tower was completed. Construction partners resumed installation of major components in the spring, following some disruption due to COVID-19 restrictions.

Construction advanced ahead of schedule last year and suppliers are managing cost and logistics challenges to ensure the project can meet its commissioning deadlines, project partners told New Reuters Events in April.

The Gemasolar CSP tower with storage plant is located in Fuentes de Andalucia, Seville. The Valle 1 and 2 plants incorporate Sener parabolic trough technology and storage and are situated in San Jose del Valle, Cadiz. All three plants came online in 2011.

The deal expands Q-Energy's renewable asset portfolio to 170 MW of CSP capacity, 1 GW of PV and 130 MW of wind. The assets are located in Spain, Germany and Italy.

An early leader in CSP deployment, Spain installed 2.3 GW of CSP capacity but domestic build was halted in 2013 after the government replaced feed in tariffs with regulated asset value-based payments. CSP costs have fallen dramatically since then and Spain's socialist-led government has proposed to double CSP capacity by 2025 and reach 7.3 GW by 2030.