Angeli Mehta looks at the new surveillance technologies being used in the battle to end illegal, unreported and unregulated fishing and how the biggest seafood players are collaborating to shine light on murky waters through the Stockholm Resilience Centre-convened Seafood Business for Ocean Stewardship

To protect the planet’s oceans, we have to know what’s going on in them and what we are taking out. Ending illegal, unreported and unregulated (IUU) fishing is critical, but many countries don’t have resources for patrols at sea and remote surveillance, leaving much of their 200-mile exclusive economic zones (EEZs) unprotected. Many also lack sufficient regulations, oversight, or inspections at ports.

But experts at Pew Charitable Trusts say the establishment of an effective global governance system to protect the oceans could make ending IUU fishing an achievable goal, given a concerted effort between nations and seafood businesses and the use of the best available technology.

One organisation shining a light on the murky waters is Global Fishing Watch, a partnership between international conservation organisation Oceana, satellite technology company SkyTruth and Google.

You can use machine learning to recognise patterns of fishing, or even …. where it's likely that they're conducting a trans-shipment

It uses satellite technology and machine learning to track vessels and monitor their behaviour in near real-time, making its data available in a freely accessible map. Indonesia, Peru, Panama, Chile and Costa Rica are openly sharing their vessel-monitoring data, and chief executive Tony Long hopes to soon add Ecuador and several African nations to that list.

Global Fishing Watch also uses signals from a vessel’s automated identification system (AIS), which are designed to avoid collisions and picked up by satellites across the globe.

Combined with other information like changes in speed and direction, its system can assess which vessels are likely to be fishing. 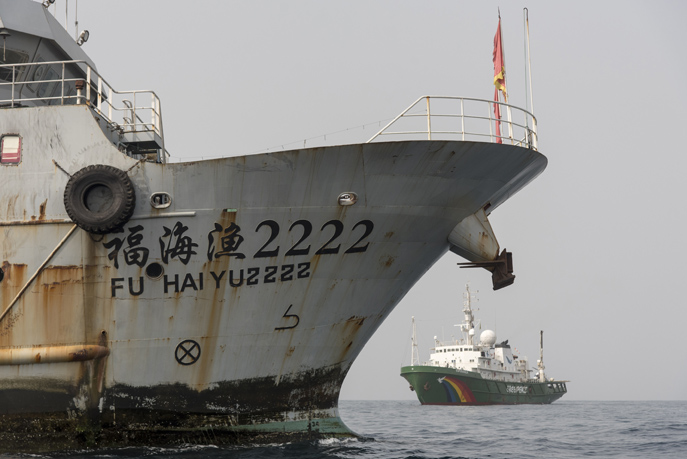 The organisation has also been working with Pew Charitable Trusts to better understand what happens on trans-shipment vessels, large refrigerated transport vessels that take on catch from commercial fishing boats and provide them supplies, typically on the high seas and out of sight of the authorities. Trans-shipment vessels have been criticised for enabling illegal, unreported and unregulated fishing, which accounts for 20-25% of fishing globally, as well as human trafficking and the smuggling of weapons.

“You can use machine learning to recognise patterns of fishing, or even …. where it's likely that they're conducting a trans-shipment. So this is why it becomes quite a powerful piece of technology to inform policy, and show you the gaps in governance,” explains chief executive Tony Long.

“Those two things put together, openness and transparency, can make a significant shift in understanding what's happening out at sea, but more importantly make people realise that they can be held accountable,” Long suggests.

One big challenge is that the data isn’t comprehensive. There are numerous different vessel-monitoring systems; not all countries operate one, and of those that do, the systems don't always talk to each other, a situation exploited by illegal fishing vessels.

The Agreement on Port State Measures, ratified by 65 nations and the EU, is designed to prevent those that fish illegally from being able to unload.

But Long argues that ports should focus on rewarding the vessels that obey the rules. That would avoid resource-strapped nations having to invest heavily in deterrence measures. 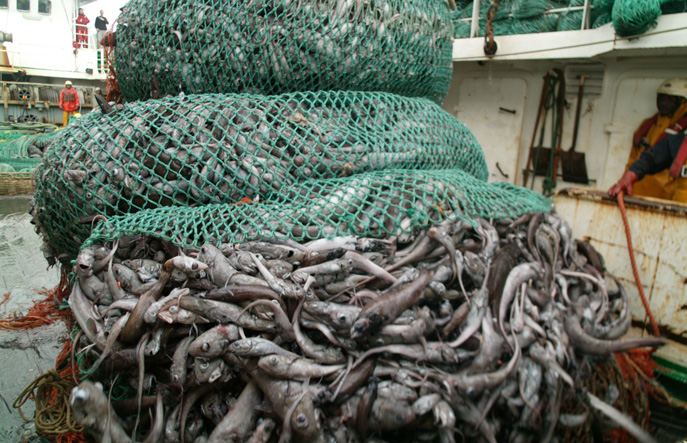 “When they come to port, it's much easier to check a set of things that are present and correct than it is to go seeking things that aren't,” he says. Companies will be incentivised to become compliant if they get rapid access to port so they can land their fish and quickly get back out to sea.

Since 2018, 10 of the world’s largest seafood businesses, which together account for 20% of global seafood production, have come together under the auspices of the Stockholm Resilience Centre to collaborate on getting the industry on a more sustainable footing.

The aim is to try and create at least some standards that can then be applied globally: like the name of the boat, the day the fish was caught, how much was caught

“The theory is that if they can be working towards sustainable seafood production, that will get picked up by the remainder of the seafood businesses around the globe,” explains SeaBOS’s managing director, Martin Exel.

Exel points out that a fully traceable supply chain will improve inventory and quality controls, as well as generate customer demand because companies will be able to communicate with them about sustainable provenance, rather than compete on price.

One of its first projects is a proof of concept study with US IT group Unisys, to develop an electronic monitoring and machine-learning platform for traceability. It provides options to track the labour or the crew on individual vessels (to address concerns of forced labour); to track the vessels themselves in terms of where they're operating; and with electronic monitoring of the catch to develop estimates, which are constantly being updated and refined using machine learning, of how much fish is in each haul, and the species caught.

All that information is uploaded via blockchain. 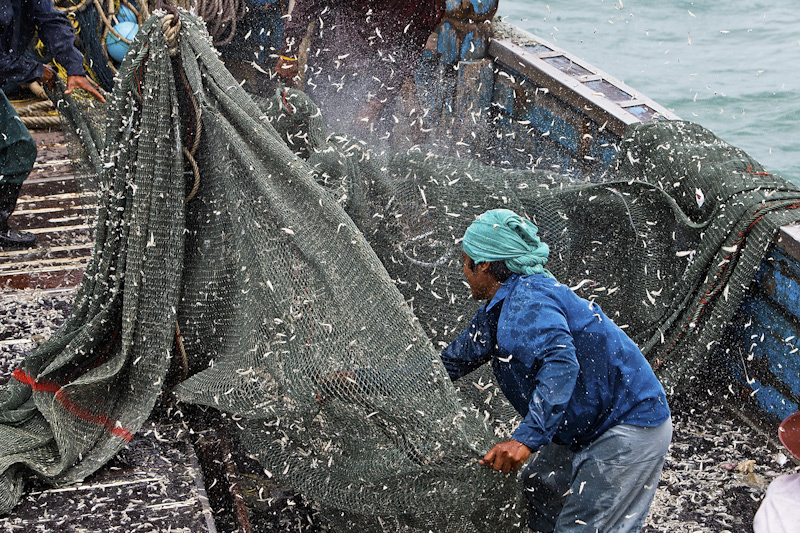 Electronic monitoring will be able to estimate how much fish is in each haul. (Credit: Athit Perawongmetha/Greenpeace)

SeaBOS has also been collaborating with the Global Dialogue on Seafood Traceability, which has just released the first standard for data and platform interoperability.

“I might be a buyer from 74 different producers and I want to make sure I know what's going on, and it's not much use if I’ve got to sit at 74 different platforms. So the aim is to try and create at least some standards that can then be applied globally, for the key data elements: things like the name of the boat, the day the fish was caught, how much was caught, where was it offloaded,” said Exel.

Satellite technology is also being used to monitor what is happening to fish stocks as a result of climate change.

The impact of warming waters is being keenly felt in the Gulf of Alaska, where five years of heatwaves mean cod stocks are so depleted that fisheries have been closed. The stocks that do remain are essential to support endangered species such as Steller sea lions.

“This massive heatwave came through and affected the entire ecosystem where we have lower productivity of plankton and zooplankton, which affected everything up the chain – whales, seals, birds. It was very scary,” explains Steve Barbeaux, research fisheries biologist at the National Oceanic and Atmospheric Administration’s Alaska Fisheries Science Center.

Further west, cod in the Bering sea seem to be swimming north into cooler waters. The scientists are using satellite tags that are programmed to detach from the fish at specified intervals – once on the surface of the water they transmit data to satellites or are picked up by fishermen. “You get a really good picture” of how far they travel and the depth to which they swim, says Barbeaux. One was found 1,500km away.

NOAA would typically be sending out research vessels to do acoustic surveys of pollock stocks, but its research vessels have not been able to sail due to the pandemic. Instead it’s teamed up with California-based Saildrone, whose unmanned surface drones do the job remotely. AI helps the Saildrones harness the winds to reach their destination, and solar energy powers echo-sounding. 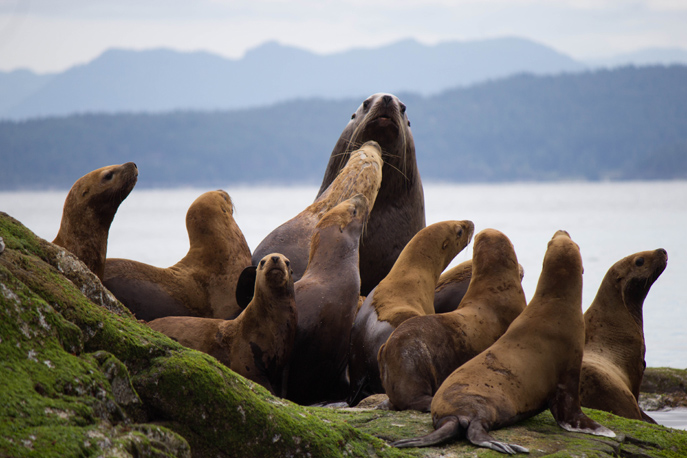 Steller sea lions in the Gulf of Alaska are reliant on its depleted cod stocks. (Credit: Chelsea Cameron/Shutterstock)

“We don't get the age structures [ranges] of the fish, or any of the biology, but it gives us a quick picture of what we think is happening with the pollock population.” Information that’s essential to inform fisheries management for the coming winter.

Another technology being explored is machine vision, which is used to interpret images captured on cameras on board fishing vessels, to identify and measure the fish being caught. Nevertheless, observer data is still required to assess the age distribution and weight of the fish, again crucial in making stock assessments.

Speaking at a UN session at the World Economic Forum in January, Jim Leape, co-director of the Stanford Centre for Ocean Solutions, pointed out that all these new data sources equip scientists to be better stewards of ocean resources. “They allow us to know in real time when a heatwave is coming that could threaten coral reefs and fish stocks; when a storm is coming that could cause a nutrient pulse that creates a dead zone in coastal waters or an algal bloom that kills all the fish that live there.”

Most innovation has allowed us to catch more fish, to find new resources deep under water. So we have to be mindful of that

Crucially, it means mitigating action could be potentially taken.

But he cautioned that innovation is a double-edged sword. “Most innovation has allowed us to catch more fish, to find new resources deep under water. So we have to be mindful of that. We have to manage these innovations but they do hold potential for us to do a much better job as ocean stewards.”

The technology, the data and the detective work all provide the opportunity for humans to become stewards of the oceans, rather than just exploiters of their bounty. So in this coming UN Decade of the Ocean, perhaps there’s a chance to ensure the oceans are in a better place in 2030.

Time is rapidly running out to save oceans

Fashion ‘slow to act on ocean plastic pollution from microfibres’

Using blockchain to bring transparency from sea to plat...
Time ‘is rapidly running out to save oceans’
ESG investors slow to make waves in the $2.5tn ocean ec...
‘We have self-isolated from our environment for far t...
comments powered by Disqus