It’s not an overstatement to say that our oceans are in crisis. Warming waters and ocean acidification caused by greenhouse gas emissions; fertiliser run-off creating dead zones where there’s no oxygen for life to survive, and over-fishing are all contributing to the destruction of biodiversity and loss of the ocean’s ability to mitigate climate change by storing carbon.

Research done for the High Level Panel for Sustainable Ocean Economy highlights the crucial role played by oceans, which account for 70% of the planet’s surface. It sets out ocean-based climate action that will cumulatively contribute as much as 21% of the emissions reduction needed to put us on a 1.5 degree pathway. These include sustainable seafood production; ocean-based renewable energies; the greening of shipping, and the conservation of mangroves and seagrass that store carbon.

To meet the goals of the Paris climate change agreement, a big proportion of the ocean has to be returned to a natural state, according to the Global Deal for Nature, a paper that sets a science-based target of protecting at least 30% of land and oceans by 2030.

The 30% protection goal is at the heart of the UN Convention on Biological Diversity, which was supposed to be negotiated this autumn, but has now been put off to 2021 because of the pandemic.

Enric Sala, marine ecologist with National Geographic and co-author of the Global Deal, describes 30% as a stepping stone. “If we are to prevent a massive extinction and the collapse of our life-support system we need half of the planet in a natural state.”

It seems a highly ambitious target, given that an agreement reached 10 years ago to protect 10% of the oceans by 2020 looks unlikely to be met, with just 7% protected by 2019. In the meantime, stocks have been declining rapidly. An international study of 1,300 species of fish and invertebrates found that 82% were being removed faster than they could repopulate. 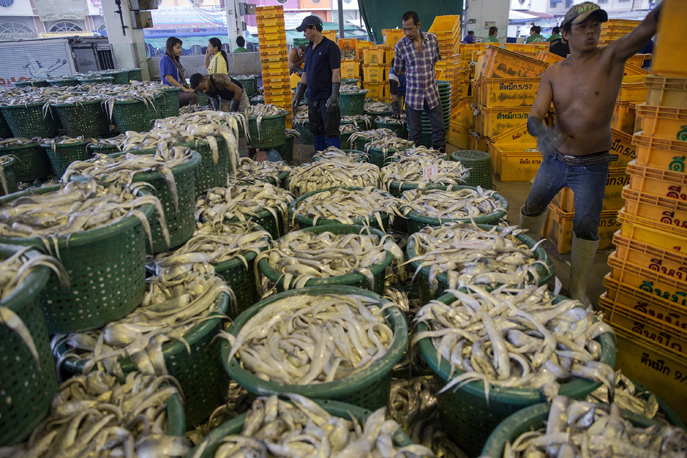 The global market for seafood is causing fish to be removed faster than they can repopulate. (Credit: Damir Sagolj/Reuters)

This summer, conservationists have watched in horror as hundreds of Chinese-flagged vessels have fished just outside the protected zone of the Galapagos. Ecuador’s navy can do nothing but observe, a task made harder when many of the vessels began switching off electronic systems that allow their movements to be detected. China’s distant water fleet accounted for about 15% of global fishing catch in 2018, and China is the worst offender for illegal, unreported and unregulated (IUU) fishing, according to a global index published in 2019.

The governance of the high seas – those waters that lie beyond nations’ 200-mile exclusion zones, where most fishing is done – is patchy. For some years the United Nations has been brokering discussions on a legally binding treaty that would conserve biodiversity in areas beyond national jurisdictions, “but we don’t have it yet,” observes Sala. The EU says it will push for such an agreement, as well as the creation of three vast Marine Protected Areas in the Southern Ocean.

“When the Law of the Sea was passed in 1982, nobody would have thought that there would be this massive pressure in the high seas and on the edge of exclusive economic zones everywhere, like there is now. And conservation was barely mentioned, it was all about exploration and exploitation,” explains Sala. Again the pandemic has put paid to a treaty, for now. Not only have countries to agree which fragile ecosystems to protect, but how to share in the benefits of marine genetic resources.

We have 70 years of experience with contemporary fisheries management. And, sorry, it's not working

“There is a myth that protected areas in the ocean will harm fishing, and the fishing industry is saying ‘if we manage them [fisheries] well, we don’t need protected areas’. Well, we have 70 years of experience with contemporary fisheries management. And, sorry, [but] it's not working except for a few examples,” asserts Sala.

So, where should the 30% of protected ocean be?

“In an ideal world, we would be looking at global priorities across the entire ocean, but in practical terms, it's going to be every country that decides how much and what to protect,” says Sala. 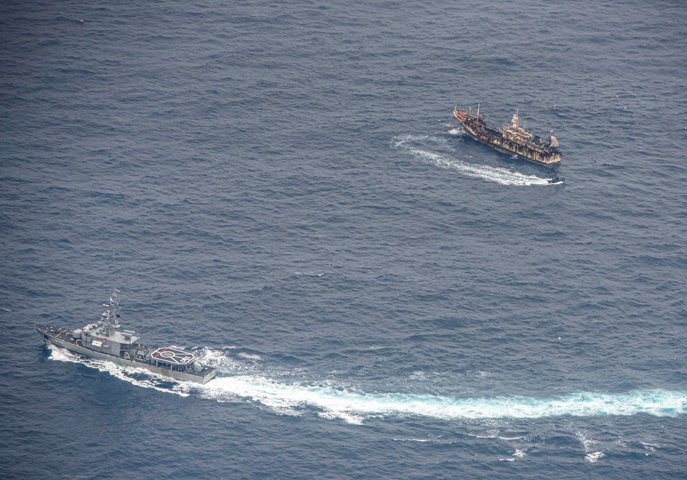 A Chinese fishing boat off the Galapagos is circled by a vessel from Ecuador’s navy. (Credit: Santiago Arcos/Reuters)

“There are countries that have resources that are globally more important, so they would have to protect more than 30%; other countries will be fine protecting less than 30%.” Most of the effort will be within economic exclusion zones of coastal countries.

To pay for the replenishment of nature, subsidies need to be redirected. The world had agreed to eliminate or reform subsidies that harm biodiversity by this year – but that has been another missed target.

“Five hundred billion dollars per year are spent subsidising industries that destroy nature or pollute our environment. [Whereas] the annual investment for managing 30% of the planet’s protection will be $140bn. We're spending three times more to subsidise activities that destroy our life-support system than what it would cost to protect a third of our planet. Notwithstanding, of course, that the benefits are going to outweigh the cost,” states Sala.

Bottom-trawling would not be commercially viable were it not subsidised

Indeed, he adds, one of the most destructive types of fishing – bottom-trawling – would not be commercially viable were it not subsidised.

Sala and colleagues have just published the first maps of the carbon stocks in marine sediment. “We found that the top metre of the sediment on the sea floor has more than twice the amount of carbon of the soils of the land.”

Some of that carbon will be disturbed by bottom trawling, and in the future by deep sea mining, although carbon emissions of such activities are not included in any country’s carbon accounts, he points out.

A recently completed review recommending the creation of highly protected marine areas (HPMAs) in UK waters concluded that one of the criteria for their selection should be to protect habitats that help capture carbon, such as seagrass. HPMAs would conserve all species and habitats within their boundaries, including passing migratory species. Pilots would test how to introduce, manage and evaluate them.

There is much to learn from a small no-take zone instituted by a coastal community in Lamlash Bay in the Firth of Clyde on the west coast of Scotland. A recent study suggests there’s been a big boost in biodiversity since fishing stopped in 2008, with numbers and density of creatures like lobsters and scallops some four-fold higher than 10 years ago.

While 12.4% of the EU marine area is designated as marine protected areas, many are poorly managed and don’t actually prevent bottom-trawling. The EU’s own assessment suggests about 79% of Europe’s coastal seabed and 43% of the shelf area is physically disturbed, mainly as a result of bottom-trawling. A 2019 report from found that trawling intensity was actually higher within marine protected areas than outside them.

We need to allow biodiversity to flourish, not only through marine protected areas, but by managing sustainable activities

Perhaps it’s not surprising, then, that the EU hasn’t met its goal of halting biodiversity loss in the decade to 2020. However, a new strategy, launched during the pandemic, and billed as a central element of the bloc’s recovery plan, takes a much more holistic view of the environment and considers all the pressures on the oceans.

“We need to allow biodiversity to flourish, not only through Marine Protected Areas, but by managing sustainable activities, either fisheries or energy production, and all activities on land that produce pollution, like agriculture, chemicals, and pharmaceuticals that pollute the ocean,” says Vivian Loonela, the Commission’s spokesperson for the European Green Deal. Quantitative targets are to be developed over the next year.

The question is whether all these efforts can be harnessed in time to preserve Earth’s life-support systems. There are some encouraging signs. This year the Pacific islands of Palau implemented a National Marine Sanctuary that will fully protect 80% of its waters, the Seychelles committed to protect 30% of its waters, and Chile – a big fishing nation – expanded protection to 42% of its waters. But many more nations need to step up.

Fashion ‘slow to act on ocean plastic pollution from microfibres’