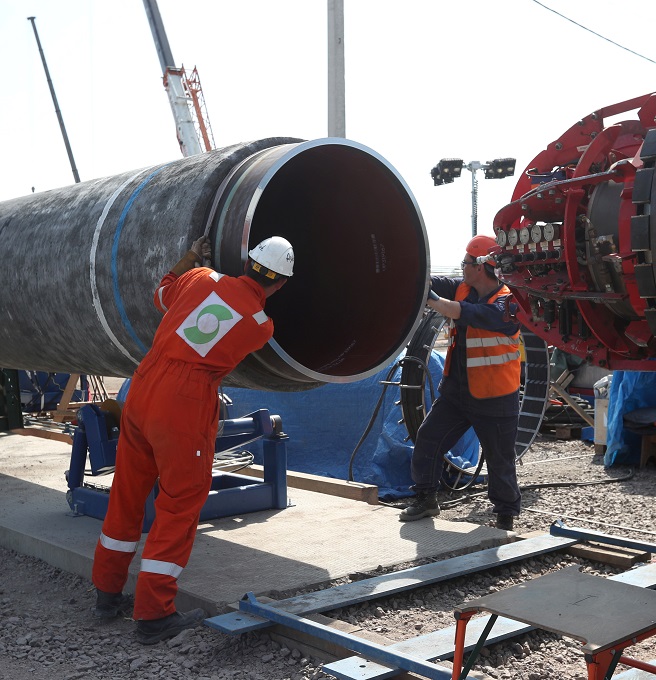 Germany is looking to curb its reliance on Russian gas imports as it phases out coal. (Image: REUTERS/Anton Vaganov)

Germany's government is to speed up the implementation of new energy laws that accelerate solar and wind deployment to reduce the reliance on Russian gas following its invasion of Ukraine, Reuters reported February 28.

Germany's economy ministry plans to speed up the passage of the Renewable Energy Sources Act (EEG) through parliament so that it can come into force by July 1, it said. The government had planned to pass two legislative packages this year - including one "Easter package" before the summer break - that would have taken effect in 2023.

Formed in September, Germany's coalition government has raised the country's renewable energy target to 80% of power generation by 2030 and aims to quadruple solar capacity to 200 GW through a massive deployment of rooftop panels. The government wants to exit coal-fired power generation by 2030 and will exit nuclear power this year, increasing its reliance on gas-fired generation and renewables. Russia supplies around 40% of Europe's gas and Germany halted the Nord Stream 2 Baltic Sea gas pipeline project from Russia after President Putin formally recognised two breakaway regions in eastern Ukraine. Ukraine disconnected its grid from a Russian network last week and has called for an emergency synchronisation with a European system to remove Russian control of grid frequency and other technical aspects.

The stronger link with Europe could be completed within weeks, EU officials said.

"There was a broad agreement around the table. Based on this, we will move forward... to connect Ukraine's electricity system as quickly as possible," EU energy commissioner Kadri Simson said.

Cyber security of critical structure is a major challenge for Ukraine. Russia has hacked global electricity networks in recent years, US officials said, and cyber attacks caused blackouts in Ukraine in 2015 and 2016. Hackers disrupted the power system feeding parts of the capital Kiev, reportedly through remote control of software-hardware interfaces and substation infrastructure.

China is expected to install 75 to 90 GW of solar power this year, up to 64% more than in 2021, Reuters reported February 23, citing the country's solar manufacturing association.

China installations could rise to an average of 83 to 99 GW in 2022-2025, Wang Bohua, honorary chairman of the China Photovoltaic Industry Association (CPIA) said at a conference.

China plans to boost rooftop solar power in central and eastern parts of the country and build more large-scale solar stations in the Gobi and other desert regions in the west.

The U.S. and Europe are looking to increase solar manufacturing capacity and Wang warned this could challenge Chinese exporters. Last month, the Biden administration extended US import tariffs on solar panels from China for a further four years. Bifacial panels were exempted from the measures.

US to discuss solar import tariffs with Canada after panel ruling

The U.S. has pledged to work with Canada to resolve a dispute over tariffs on Canadian solar panels after a U.S.-Mexico-Canada Agreement (USMCA) dispute panel found they were unjustified.

Imposed by President Trump in 2018, the Section 201 import tariffs aim to protect US manufacturers of crystalline silicon photovoltaic cells from cheaper Chinese imports but did not exempt Canada or Mexico. Last month, the Biden administration extended the tariffs for a further four years but exempted bifacial panels that are popular with utility-scale solar developers.

Canada argued that the tariffs violated the terms of the USMCA pact, which eliminates most tariffs among the North American partners.

"We will continue to review the report and work with Canada to resolve the dispute," USTR spokesman Adam Hodge said in a statement.