When Bertrand Piccard touched down in Abu Dhabi in July 2016, docking his solar-powered light aircraft for the final time after an epic 42,000-kilometre trip around the globe, he went immediately to the waiting bank of cameras and microphones. “The future is clean,” the charismatic Swiss aviator declared. “Let’s take it further.”

Much has happened in the interim. High on Piccard’s list is the revolution in renewable energy prices, with solar-powered electricity now averaging below $0.05 per kilowatt hour – almost one third of what it was when his breakthrough eco-airplane took to the skies.

"A lot of the materials were experimental when I started on the Solar Impulse journey back in 2002. Now the technologies exist to make renewable energy cheaper than fossil fuels,” states 62-year-old Piccard, who practised as a private psychiatrist for two decades prior to his world-record beating flight.

Even so, progress towards a zero-carbon energy system remains a long way off. Around 28% of today’s energy mix derives from renewable fuels, an increase of just four percentage points on 2016.

Enter Piccard’s idea for taking the cause of sustainability further. In 2017, his non-profit Solar Impulse Foundation put out a call for cutting-edge ideas from the world’s smartest eco-innovators.

The solutions need to be working already, economically profitable and better for the environment than anything else in their sector

It’s not just answers to the challenges of energy transition that he is seeking. The Lausanne-based adventurer (he also holds the record for the first ever non-stop balloon flight around the globe) has his eyes set on resolving other pending crises as well, from water pollution and industrial waste to food insecurity and over-consumption.

The whole endeavour, which he brands his 1000 Solutions challenge, is imbued with his characteristic adventurism. Indeed, averting the “ecological chaos” that he ascribes to patterns of unlimited business growth is to his mind the “greatest adventure of the world today”.

A favourite on the global speaker circuit these days, Piccard is never short of a memorable phrase or motivational maxim. Talk of the planet’s many pending problems evokes one of his favourites: “A crisis you accept becomes an adventure. A crisis you refuse remains a crisis.” 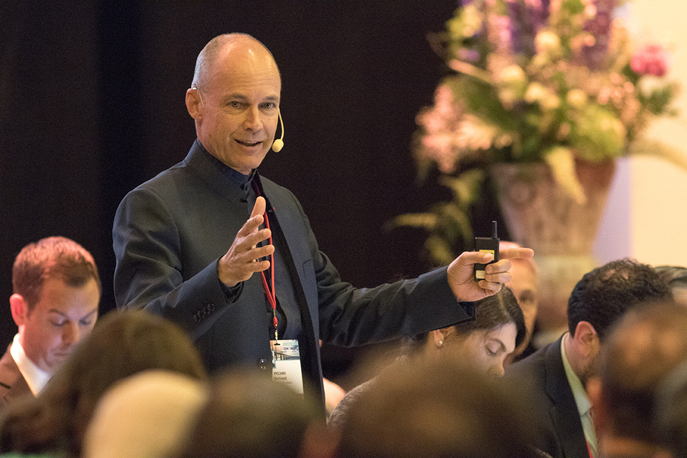 For much of the last three years, he and a small team have been collecting, researching, and analysing the responses to his latest adventure. The result is a list of around 910 firms (he anticipates reaching the 1,000 mark in mid-April) with tangible, tech-based solutions to some of the planet’s largest crises.

Piccard is agnostic about the size, industry, location or ownership structure of the companies in question. “It’s the solutions that matter, not the company,” he says.

To qualify, applicants need to prove their financial viability and market potential as well as their sustainable innovation credentials.

Rather than picking out individual industries, what we need is efficient solutions across the whole system

His favourite examples include a small French biogas producer that uses membrane filtration and cryogenic distillation to purify methane from landfills for the grid. Or the storm-management firm that prevents heat islands in cities via an air cooling system based on “evapotranspiration”, while simultaneously preventing floods. Or the food manufacturer that has invented a nutrition-rich protein product derived from mealworm larvae (in video below).

It’s not all small startup operations either. Multinational oilfield-services firm Schlumberger makes the cut thanks to a spin-off venture that uses geothermal to provide urban heat pumps. Belgian chemical giant Solvay also features, courtesy of an environmentally friendly cleaning solution for use in the international semiconductor industry.

Unsurprisingly, given Piccard’s penchant for travel, transport solutions feature prominently. One is SkyBreathe, a pilot-oriented software solution that promises to reduce in-flight fuel use by up to 5%. A battery-powered propulsion system for light aircraft – designed and commercialised by André Borschberg, co-pilot on the Solar Impulse flight – also gets a look-in.

Piccard is notably reluctant to be drawn on any major structural transformations to the aviation industry. In part, this reflects a life-long passion for flight, something he traces back to attending the launch of Apollo 12 as an 11-year-old – an occasion that also saw him meet his childhood hero, the famous U.S. aviator Charles Lindbergh.

But there are other reasons for his reticence. For one, he feels aviation gets a bad rap in climate circles. At around 3%, the carbon footprint of air travel is a fraction of total transport emissions. Compared to heating our homes, it’s even less significant.

“Rather than picking out individual industries, what we need is efficient solutions across the whole system,” he states.

His reticence also stems from a belief in the capacity of clean technologies to wean us off our collective addiction to fossil fuels.

You can tell people ‘stop with everything’ or you can tell them ‘have a good life but use clean technologies’ ... the second is likely to be far more successful

Tech-based solutions like those identified by his foundation might resolve 50% of the problems at hand, he conjectures: “The other 50% will rely on common sense.”

From his career in psychiatry, Piccard is also acutely aware of people’s innate reluctance to change, especially if such change implies an element of self-sacrifice.

“You can tell people ‘stop with everything’ or you can tell them ‘have a good life but use clean technologies that are more ecofriendly’. Psychologically, the second is likely to be far more successful.”

This thinking is central to his pitch to business leaders and policymakers. When presenting the 1000 Solutions initiative, he insists it represents a model for delivering economic growth and competitiveness as well as planetary sustainability. 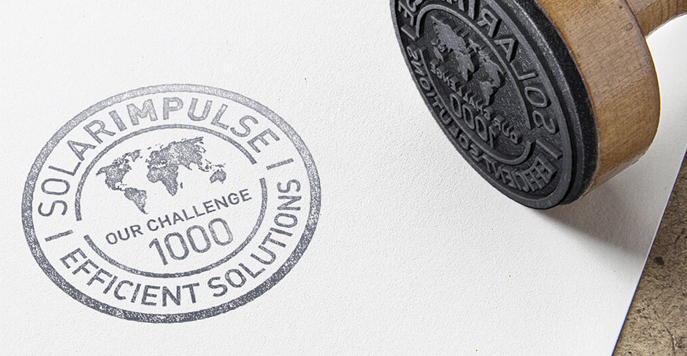 Not everyone buys into the argument. Piccard’s preference for “qualitative growth” (a middle road between degrowth and exponential growth) rubs up the more anti-capitalist wings of the green movement, he admits.

Still, he hopes the ideas identified by the 1000 Solutions challenge can gain traction and reach meaningful scale.

Borrowing from his hugely successful strategy for the Solar Impulse flight, he plans to spend a year (once Covid-19 restrictions allow) travelling the world and selling his idea to heads of state and corporate leaders.

Let’s be honest, right now governments have no real idea on which are the most promising technologies

Given his media profile, the challenge won’t be getting a photo op but ensuring concrete uptake of the solutions afterwards, he admits. Here, he takes confidence from the climate focus of many of the post-pandemic recovery packages currently on the table.

“There are trillions of dollars flooding into the market right now for the economic recovery, which is great. But it would be counterproductive to use this money to support polluting sectors. Let’s be honest, right now governments have no real idea on which are the most promising technologies.”

To give credibility to his initiative, each of the solutions identified will carry a certification mark, the Solar Impulse Efficient Solution Label. Piccard is at pains to point out the system’s robustness, noting that the framework for assessing candidates has a sign-off from the global accountancy firm, EY. 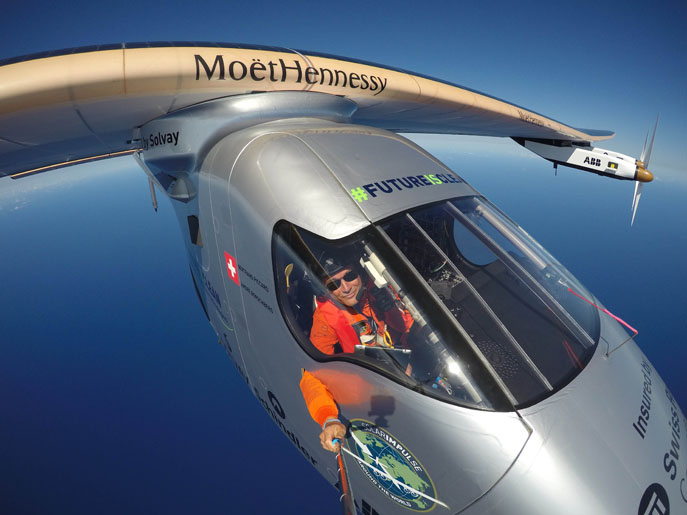 Piccard in the cockpit during a training flight over Hawaii.  (Credit: Solar Impulse Foundation)

For the certification process itself, however, the Solar Impulse Foundation relies on the pro-bono efforts of a network of experts. Running costs are covered by the foundation’s 16 corporate sponsors, which include Michelin, Nestlé, Engie, and Air France, as well as the above-mentioned Schlumberger and Solvay.

Like all good adventurers, Piccard is not blind to the challenges ahead. Reluctance to change is not limited to individuals, he notes. “The problem for many companies is that they have invested massively in expensive, outdated and inefficient technologies, and now they resist to the change instead of diversifying as soon as possible.”

How to break this deadlock? Allow the “pioneering spirit” of the innovators now carrying the Solar Impulse seal to wash off on them, he says. Pioneers, after all, are those willing to “go beyond habits, certainties and beliefs” and create something new.

It is this same spirit that saw Piccard bank on nothing more than sunshine to fly him around the world. This latest eco-tech adventure suggests he still has plenty of pioneering zeal left in the tank.

This article appeared in the February 2021 issue of the Sustainable Business Review. See also:

In focus: How far apart are Shell and ExxonMobil on climate?

GM zooms ahead in electric vehicle race, but how green is its e-Hummer?

Brand Watch: How brands are scrambling to bring clean-t...
Good for General Motors, but is an electric Hummer good...
Tech for good: Can fourth-gen technologies put business...
The appliance of science: how AI is making inroads on t...
comments powered by Disqus