Leading US firms tell COP23: ‘We are all in’

Walmart, Mars, Coca-Cola and Microsoft were among the US companies that defied Trump’s decision to leave the Paris Climate Agreement as part of the 100-strong #WeAreStillIn delegation to last week's climate talks

Sustainability chiefs from Mars, Walmart, Coca-Cola Company and Kellogg were at the UN climate summit in Bonn last week as part of an extraordinary 100-plus delegation of mayors, governors, civil society and universities, led by California governor Jerry Brown, trumpeting the commitment of US non-federal actors to fulfil US climate commitments despite Donald Trump’s decision to pull the US out of the Paris Agreement.

In contrast to the tiny official US delegation, which for the first time has no pavilion, the We Are Still In delegation was headquarted in a massive white structure of six interlinked domes, known as “the Igloo”, funded by Bloomberg Philanthropies and billionaire hedge fund manager Tom Steyer.

Among them were 50 corporations, including Kellogg, PepsiCo and Walmart, that have signed up to the Science-Based Targets initiative to cut their CO2 emissions in line with the Paris Agreement, more than any other country.

“The federal government doesn’t decide whether or how the US takes action on climate change,” Bloomberg told an audience of 800 people, including numerous heads of state, at the launch event. “Those decisions are made by cities, states, businesses and civil society. The goal of the federal government is to support and coordinate those efforts. But if Washington won’t lead, mayors, governors and CEOs will. And there is nothing Washington can do to stop us.” 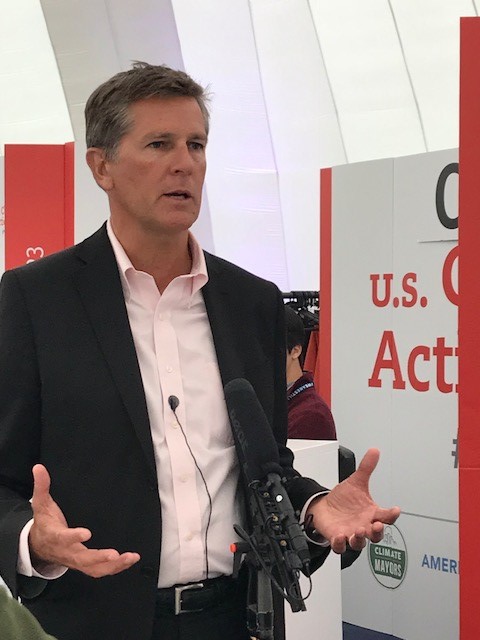 He handed the report to UNFCC executive secretary Patricia Espinosa, describing it as a “surrogate NDC” (climate action commitment) from the United States.

In an interview with Ethical Corporation, Barry Parkin, chief sustainability officer of Mars, said it is important for American companies to show they are fully engaged in the fight against climate change. “There’s a lot of negotiations going on in Bonn that we are not part of, but we are here to let the negotiators know that there are other non-state actors in the US; cities, states and industry, who are committed to [the] Paris Agreement and are taking action,” he said. “They [the US delegation] have all come here to say what they’re doing and to support each other to get it done.”

He pointed to Mars’ recently announced $1bn Sustainable in a Generation plan. “Not only are we still in, we are all in. We’ve set these very, very challenging climate goals to reduce the carbon footprint of our entire value chain – from farming all the way to consumer use – by two-thirds by 2050. That’s an absolute reduction. And that only comes through transformation.” 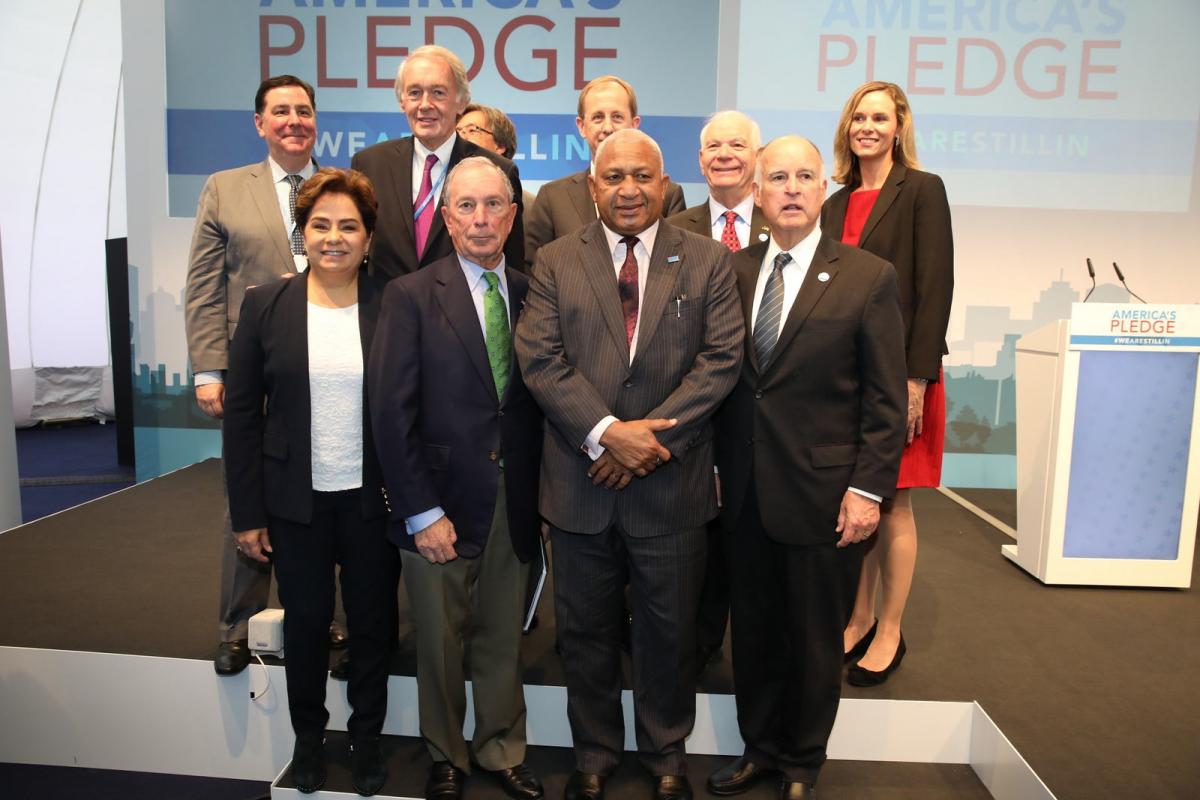 Microsoft, which was one of the first companies to put an internal price on carbon in 2012, was a prominent participant at Bonn, and announced this week that it would cut its operational carbon emissions by 75% by 2030, against a 2013 baseline, avoiding more than 10m metric tons of CO2 emissions.

But the company that arguably had the highest profile at Bonn is Walmart, America’s biggest retailer. Laura Philips, senior vice president of sustainability, spoke at the America’s Pledge launch and has popped up at numerous side events across the sprawling Bonn campus talking about how Walmart will cut its scope 1 and 2 emissions by 18% by 2025, and its even more ambitious Project Gigaton to reduce 1 gigaton of CO2 from its supply chain between 2015 and 2030.

Walmart has saved $1bn in fuel bills by installing enough solar panels on its supermarkets to cover 190 football fields, she said at the launch event: “It’s good for business, it’s reduced emissions and it’s good for our community.”

But supporting the We Are Still In coalition is not the only reason that US companies were in Bonn. Lisa Manley, senior director of sustainability at Mars, told a panel at the US Climate Action Center that the climate talks were a great opportunity for Mars to engage at a high level with other members of the ecosystem of suppliers, NGOs and, most crucially, policymakers it needs to work with to deliver its ambitious climate plan: “It’s harder to get them together in McLean, Virginia, where our head office is.” 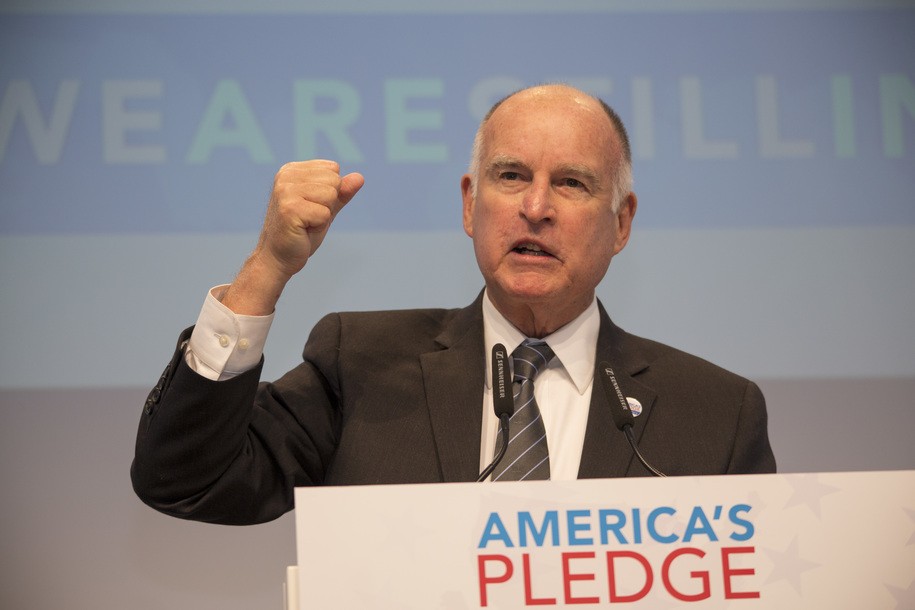 Katherine Neebe, Walmart’s director of sustainability, agreed. “It’s hard to get an assembly of policy makers, civil society and the business community at the same time,” she said. “Typically you can have two, but not three, and that is a problem,” she said. “By being here you can bridge some of the divide.”

No one was doing more at COP23 to bridge the divide than the tireless California governor, who was scheduled to appear at more than two dozen events at COP23, determined to keep the spotlight on action at the sub-national level on climate change, not only in the US, but around the world.

California and the German state of Baden-Württemberg were the first two members of the Under 2 coalition of states that commit to either reducing their greenhouse gas emissions 80%-90% below 1990 levels, or to less than 2 metric tons per capita by 2050. The coalition, which is organised by The Climate Group, has since grown to 205 jurisdictions representing 43 countries and six continents.

Now Brown wants to step his climate leadership up a gear, and used the stage of COP23 to invite the world to the Global Climate Action Summit in San Francisco next September, which will take stock of the cumulative impact of what all sub-state actors around the world are doing on climate change, and encourage them to increase their level of ambition beyond 2020.

“We have to become missionaries. We need prophets, zealots to promote climate action,” he told one side-event. “Come to San Francisco in September 2018, and you will get a call from me or my staff, but don’t come if you aren’t ready to do more for climate action.”

Will 2023 be a watershed moment for corporates on addre...
‘We are sliding from climate crisis to climate disast...
A week of getting real about the enormity of the climat...
The pioneers trying to restore life to America’s stre...
comments powered by Disqus