Last year, Oxfam embarked on a campaign asking 16 of the largest supermarkets in the UK, US, Germany and the Netherlands to take responsibility for ending human suffering in their food supply chains. A year on, what has changed?

Oxfam’s Supermarket Scorecard assesses food retailers against 93 internationally recognised indicators of good practice in four key areas: transparency of their policies and governance structure (including whether consumers know where food comes from); conditions for workers; conditions for small-scale farmers; and tackling discrimination against women. Each of the supermarkets’ publicly disclosed policies and practices are reviewed, based on information from company websites, annual accounts, sustainability reports and other publicly available material as well as through engagement with the companies themselves. Read more about Oxfam’s scorecard methodology here.

The 2019 Supermarket Scorecard shows that, while some are doing better than others, all supermarkets lack sufficient policies to properly protect the people who produce our food. No supermarket does even 40% of what the Oxfam benchmark asks them to.

While change is possible, most companies move slowly, and in response to public pressure

Eight of the 16 companies, including Lidl, Plus and Whole Foods, have made little to no improvement at all, reinforcing their position as laggards. Others, such as Sainsbury’s and Walmart have made limited improvements to their policies.

However, some supermarkets – Ahold Delhaize’s Dutch subsidiary Albert Heijn, Aldi South, Jumbo, Morrisons, Rewe and Tesco – made important new policy commitments to ensure the women and men in their supply chains are treated fairly. These examples show that, while change is possible, most companies move slowly, and in response to public pressure.

Some supermarkets started moving towards increased transparency and have made significant strides in disclosing their human rights policies and practices. Compared with very few supermarkets in last year’s assessment, eight of the 16 companies assessed in 2019’s scorecard have: 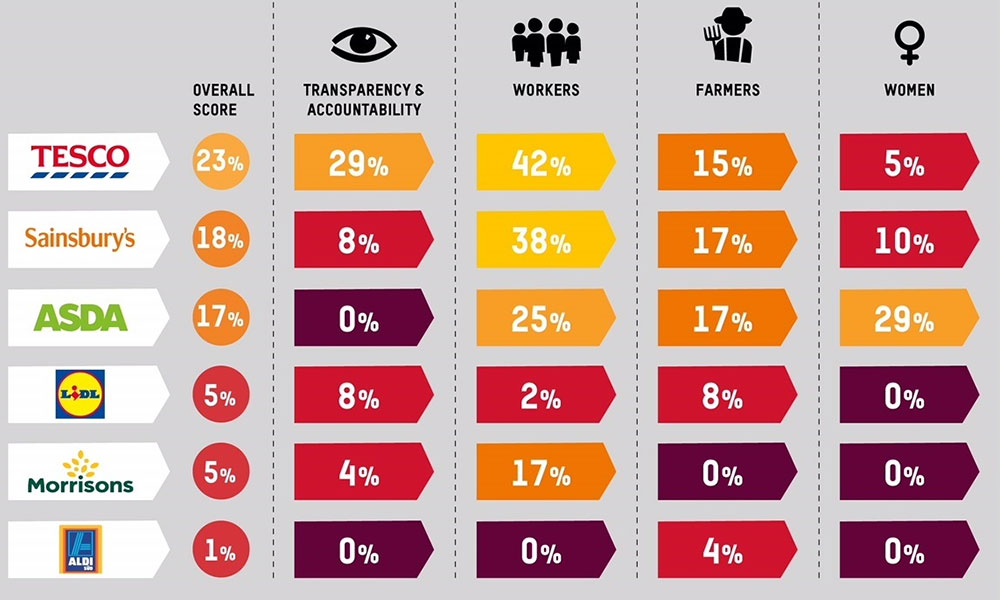 Dutch supermarkets Albert Heijn (subsidiary company of Ahold Delhaize) and Jumbo were the first to publish human rights policies in response to our campaign. They are the only two of the 16 who have committed to publish who their first-tier suppliers are for their private-label products. Consumers will now know where their products have come from, and farmers and workers will know who is buying their produce. This shows supply chain transparency is possible, and we urge other supermarkets to follow suit.

Similarly, after public pressure in multiple countries, German retailer Aldi South published its first human rights policy, and has begun to show where and what kinds of human rights risks exist within its supply chains. This has resulted in an 18% scorecard increase for Aldi South– the biggest improvement of all.

While many supermarkets say they support small-scale farmers, almost no measurable progress is reflected in their policies and practices

Looking closely at how companies promote workers’ rights, UK supermarkets Tesco, Sainsbury’s and Morrisons are relative frontrunners. This is due to longtime participation in multi-stakeholder initiatives like the Ethical Trading Initiative, and the strong UK government framework on modern slavery.

Tesco stands out for making meaningful commitments, and taking actions to increase workers’ representation and wages. It is the only company reaching over 50% of what companies should be doing, as assessed in the “workers” theme of the scorecard.

On the topic of workers rights, two main areas of progress stand out:

Most supermarkets fail to protect farmers’ and women’s rights. While many supermarkets say that they support small-scale farmers to thrive, almost no measurable progress is reflected in their policies and practices. The only meaningful action is to sell certified Fairtrade products, which nearly all now do.

And when it comes to explicit respect for the rights of women workers and producers, almost all companies fail – and only six have any measures in place at all. While supermarkets “get” the fact that women face more challenges, such as earning less than men for doing the same jobs, their policies and practices fall short. Only Tesco and Ahold Delhaize made significant improvements this year, to join frontrunner Walmart, in systematically addressing women’s rights in their global supply chains.

In conclusion, what do supermarkets need to do more? While some companies are making real progress in certain areas, others lag behind. Four areas consistently stand out as priorities for action:

While we celebrate the progress that is being made by a few leading companies, it must be acknowledged that large gaps remain for the majority of supermarkets assessed. Half of the 16 companies have barely improved at all, and their scores reflect this. However, the first year of the campaign has shown that, with improved understanding and public pressure, companies will move.

Oxfam remains committed to ongoing engagement with all the supermarkets involved in our campaign and will continue to share knowledge, and offer guidance when needed. Our supporters and allies will keep campaigning to accelerate this process of change so that in future workers and small-scale farmers do not have to suffer to produce our food. 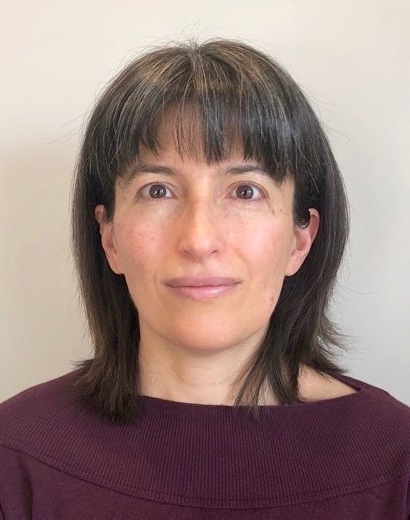 Monica Romis is part of Oxfam GB’s Private Sector Team, and leads the Supermarket Scorecard for the Behind the Barcodes campaign.

This article is part of the in-depth Human Rights briefing. See also:

‘Do we need a Paris Agreement on social issues to get companies to take them seriously?’

From Untouchables to plastic waste entrepreneurs

Investing in people: how brands are stepping up to the refugee crisis

How Airbnb and WeWork are opening new doors to refugees