Vision statements are two-a-penny these days. “By 2050, we will …” What? “Solve world hunger”, “save the forests”, “reverse global warming”…. It hardly matters. By the time the date rolls around, sceptics say, few will remember and even fewer care.

So, should they be taken seriously? Not if they are pie in the sky, clearly. But when grounded in reality and backed up by a credible delivery strategy, ambition plans can be hugely powerful tools for present-day action.

In the case of Singapore-based food giant Olam,  its stated vision is to become “the most differentiated and valuable global food and agri-business by 2040”. Reasonable enough and, frankly, what is to be expected from one of the food industry’s biggest players.

What is intriguing is how the company intends to realise its ambition. The key factor, according to sustainability director Christopher Stewart, is to become “purpose-driven”. As of 2017, this translates as “re-imagining global agriculture and food systems”.

But what is needed is a “rebalancing” of today’s food system, according to Stewart. What Big Ag has done for yields and efficiency over the last 50 years, it now needs to do for environmental protection and farmer rights. 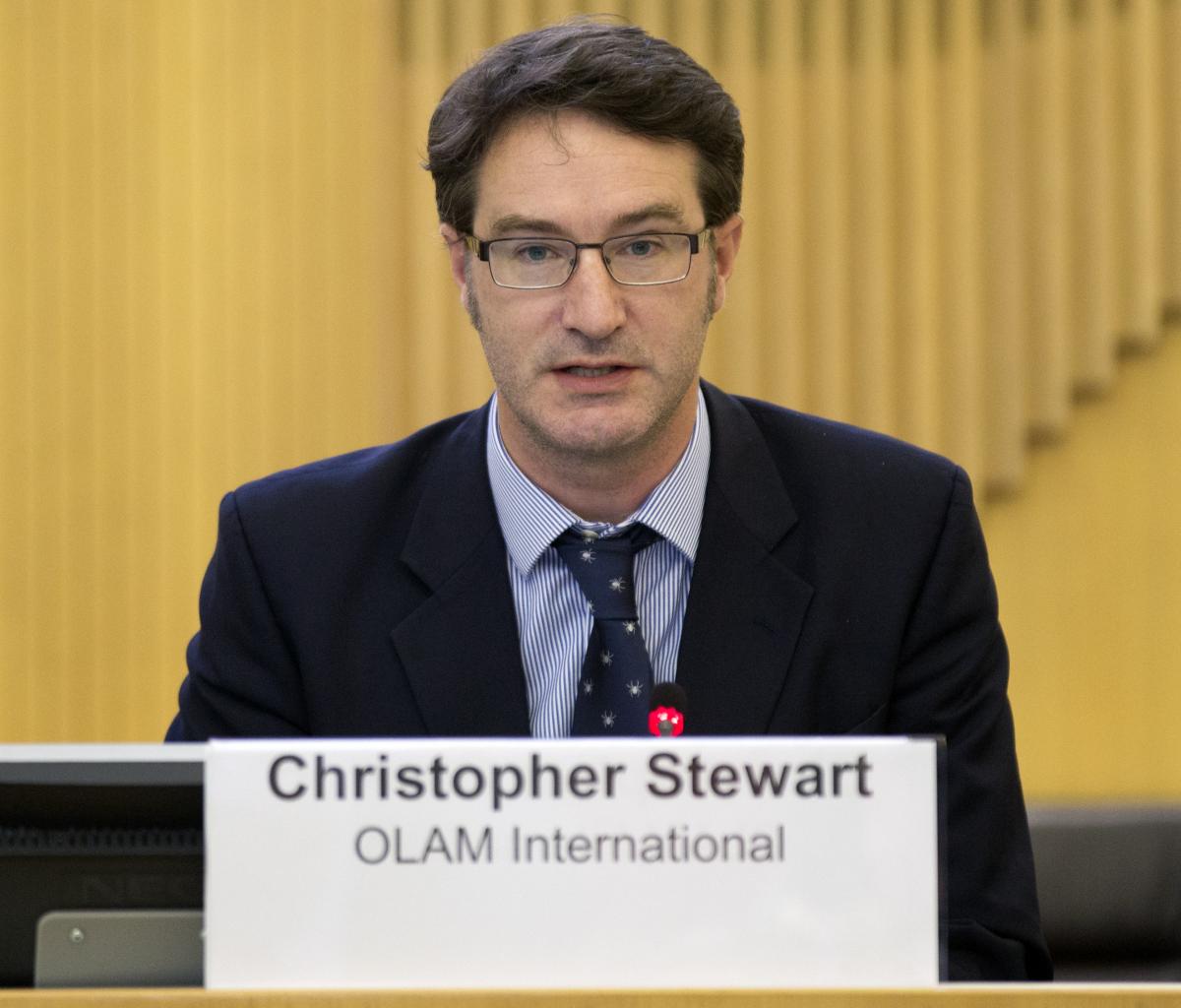 Such frankness is rare in the commodity industry. For years, agricultural commodity traders were an opaque force in the global food system, operating as a vital link between producers and brands yet reticent to draw attention to themselves.

But rewind four years to when Olam revealed its revamped purpose and the company’s co-founder and chief executive, Indian-born Sunny Verghese, talked of the need for a “new ways of doing things”. Only by pursuing a transformative path, he argued, could the food sector keep within critical planetary boundaries.

It is a message he recently reiterated as chairperson of the influential World Business Council for Sustainable Development (WBCSD). Long before we reach 2050, there’s the 2030 Sustainable Development Goals to be considered – many of which are on track to be missed. Add Covid-19 to the mix and the need for a sustainable transition is “more important than ever before”, he stated.

You really need to actually understand what are the underlying challenges that farmers face, and then address these together

The comment coincided with WBCSD’s publication back in May of its own Vision for 2050. A split between a wake-up call for business and a tangible pathway forwards, the statement (which is contained within a 118-page report) represents an update of a similar document 10 years ago.

One of the new document’s driving messages is the need for leadership.

Along with 41 other leading companies (including BASF, IKEA, Microsoft, Nestlé, Shell and Unilever), Olam has put its signature squarely to WBCSD’s “framework for action”, in which, by mid-century, the planet’s population of 9 billion-plus is “living well” within the planet’s resource boundaries.

A biologist and forest ecologist by training, Stewart is clear that amid the world’s panoply of pending crises, the most critical are climate change, biodiversity loss  and inequality. More remarkably still, he concedes that food production “is at the root” of many of these interwoven crises. 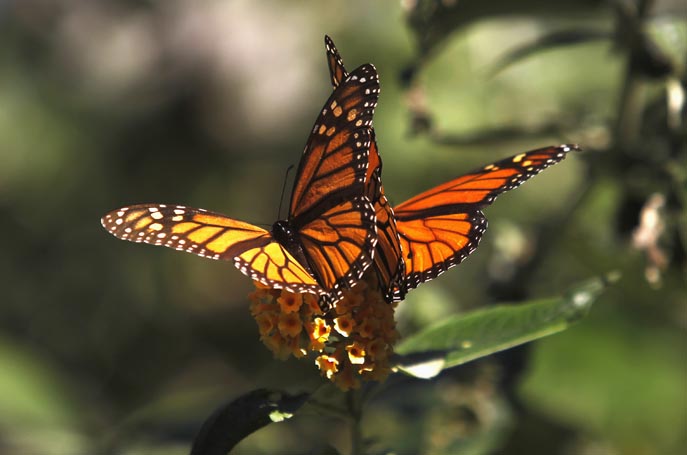 Monarch butterflies, which are in decline in the U.S. Stewart concedes food production ‘is at the root’ of crises such as biodiversity loss. (Credit: Michael Fiala/Reuters)

Olam’s sustainability lists a string of questions that he and other senior colleagues within the business are currently grappling with, ranging from methods to ensure that food production delivers for poor farmers through to approaches that avoid a “mining-type” model of agriculture that takes from the earth and gives little or nothing back.

Part of the process of arriving at answers involves putting oneself in others’ shoes. It’s impossible to solve deforestation, for example, if you don’t understand that farmers are chopping down forests “to get enough money to put food on their table and shoes on their children’s feet”.

It is the reason that Stewart sees international aid and traditional corporate philanthropy as making for “good images” but having little long-term impact. “It’s not through an aid program that you're going to transform these food systems. You really need to actually understand what are the underlying challenges that farmers face, and then address these together.”

WBCSD puts it slightly more prosaically, arguing that a shift in mindset relies on jettisoning short-term planning in favour of business strategies that deliver long-term resilience, regenerative growth, and, ultimately, a “reinvention of capitalism”.

Rewriting capitalism is a big call for any single company. Indeed, to think at a systems level requires companies to consider themselves not as lone actors, operating at the centre of their orbit, but as part of a whole – sometimes in a position of influence, other times on the periphery.

So far, so good in terms of Olam’s stated goal of re-imagining the global food system. The challenge is making good this revised vision. It is tempting to conceive of systems thinking as a pretext for inaction. How can a single cog change an entire wheel? Or, more directly, how can a single commodity trader alter how a multinational, multilocal system as complex as that of global agriculture?

It’s not easy, concedes Stewart. The trick is to identify where the key levers of change lie (public policy? private finance? consumer behaviour?) and how your business can get these levers moving in the right direction.

With regards to food production, Olam’s role as a buyer and seller of agricultural commodities gives it a unique farm-to-fork viewpoint, according to Stewart. Hence, the company’s support for consistent reporting protocols, a vocal demand from client and investors alike. So, too, its backing of grassroots support mechanisms such as credit programmes and training schemes, which farmers say offer a boost to their livelihoods. 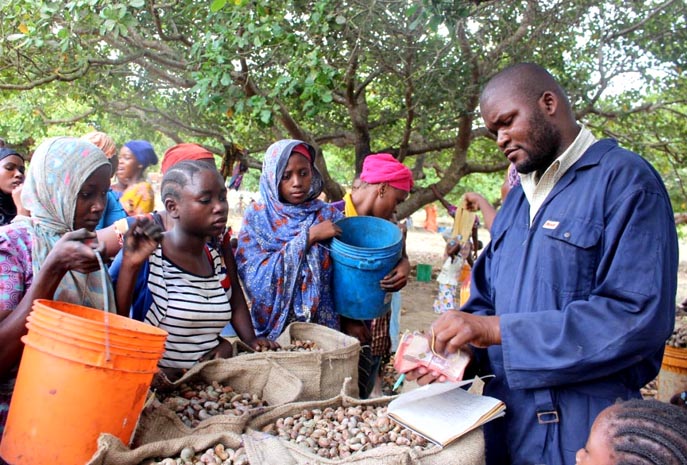 Olam has pledged to trace all its cashew purchases back to individual farmer groups. (Credit: Emmanuel Herman/Reuters)

A good example of a specific lever of change that Olam has identified and is pushing hard is around transparency of information. Greater visibility of the food ecosystem will, its logic runs, enable better decisions and more targeted interventions.

“At present, many of us are sort of acting with our own kind of restricted view of what's suitable and what’s appropriate,” Stewart states.

To help resolve this knowledge gap, the company launched the Olam Farmer Information System (OFIS) back in 2014. The tool draws on insights from GPS and detailed surveys, generating actionable, farm-level data for smallholder farmers.

Collecting and processing so much data is no small feat. Olam employs a staggering 6,000-plus workers to carry it off – many of whom also provide farmers with tailored, on-the-ground training. Once in farmers’ hands, however, the data offers opportunities for devising specific farm-management plans that lead directly to increased yields, says Stewart.

At present, the tool reaches around 550,000 of the 773,000 producers involved in its sustainability programmes. It’s a sizable proportion, but a fraction of the more than five million farmers that Olam calculates are in its direct and indirect supply chains.

That said, one of the ways to scale the initiative is to use the same information for different ends. This is what Olam is now doing with its AtSource tool, a digital platform that tracks key sustainability metrics on a farm-by-farm basis.

By the end of last year, nearly 312,000 farmers were registered on the system, which Olam uses to keep food manufacturers and other buyers informed about supply-side risks and issues. The company also employs the system to show progress against its own sustainability targets, such as its new 2030 pledge to trace all its cashew purchases back to individual farmer groups and to increase the average yields of cashew farmers by 50%.

Olam is also using transparency to try and influence investor behaviour. Alongside its financial results, for example, its recent integrated annual report includes extensive facts and figures about its use of six non-financial areas of capital (including social, human and natural capital). 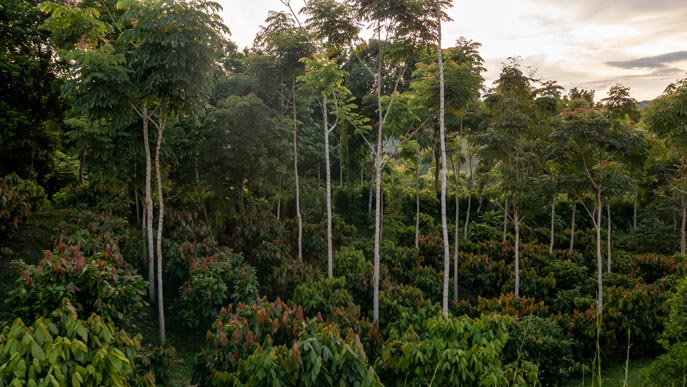 The report also includes an intriguing study that seeks to monetise the value derived from its efforts to engage and inspire its workers. Based on a pilot in Vietnam, the results indicate a return of S$16.76m ($12.48m) from positive employee engagement, countered by a S$1.78m loss in productivity from disengaged workers.

The study follows a previous analysis of the natural capital costs of the company’s cocoa operations. The investigation reveals that water use and greenhouse gases associated with the growing of cocoa by farmers in its sustainability programme amount to an estimated $1,283 per tonne in 2020. Thanks to improved practices, such as efficient fertiliser use and the planting of shade trees, the overall figure has fallen from $1,402 in 2018.

“It’s useful for everyone to understand what is at stake because nature doesn’t issue a bill at the end of the year for the resources we’ve used up,” says Stewart.

The food and agricultural sector is still “in the foothills” of system transformation, he admits. Yet, change is all about momentum. The easiest thing for business managers is to do today what they did yesterday. If that built-in inertia can be broken, the possibilities become infinite.

If you don’t address farmers’ needs, that’s an existential threat to our business

Stewart gives the example of Olam’s efforts at natural capital accounting: “If it’s only us that are doing it, then it will have a limited impact . . . but when this catches on [and] we have more accurate estimations, then that will enable the financial system to gear up to address these challenges.”

The WBCSD Vision 2050 report ends with a promise. Embrace the core elements of transformation – shared vision, changed mindsets and systems thinking – and a new-look, progressive form of capitalism will emerge that delivers “fundamentally different outcomes”.

The idea of an approach to business that leaves the world fairer, safer and healthier (as opposed to the contrary) makes for an attractive prospect. Indeed, as an end goal, it’s difficult to disagree. Getting there, of course, is the challenge.

Stewart believes the food and agriculture sector finds itself in a do-or-die moment. “If you don’t address farmers’ needs, that’s an existential threat to our business.” The exact route ahead may remain unclear, but the reason for getting started is unambiguous.

This article is part of the July issue of the Sustainable Business Review. See also:

ESG Watch: Insurers and airlines begin to feel the heat over climate risk

Can business bridge the yawning gap in finance for natu...
‘Get the blend right’ and we can unlock trillions i...
Brands failed to meet promises to protect forests. We c...
Policy Watch: Norway deal with Indonesia a bright spot ...
comments powered by Disqus