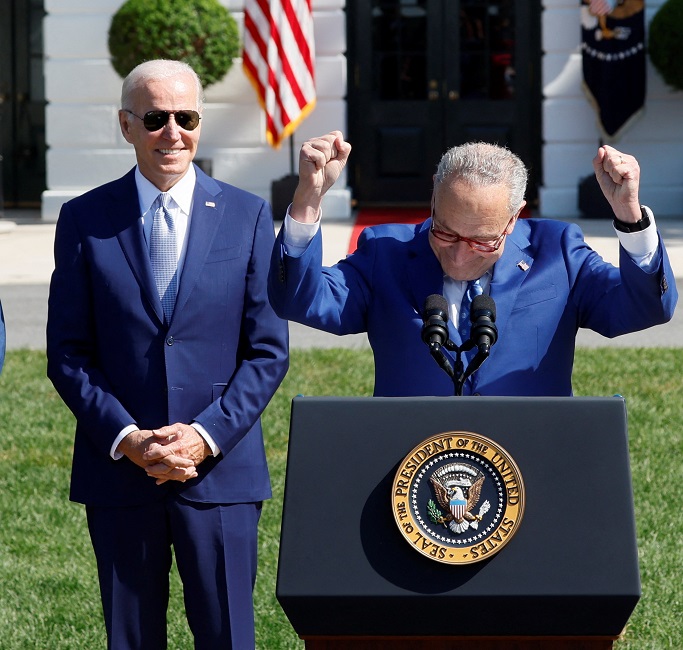 Biden's climate bill will have a huge impact on solar development and manufacturing if it passes the lower house. (Image: REUTERS/Evelyn Hockstein)

The U.S. Senate passed $370 billion of clean energy measures in a transformational bill that could put the country back on track towards President Biden's climate goals.

The Inflation Reduction Act includes sweeping measures to accelerate solar, wind and energy storage and could be voted on by the House of Representatives as early as this week.

The measures could hike annual utility-scale solar installations to 49 GW by 2025, five times higher than in 2020, Princeton University said in a special report. Wind installations could rise almost threefold to 39 GW/year by 2025 and solar growth rates would continue to increase thereafter, it said.

U.S. solar installations must quadruple to around 60 GW/year by the middle of the decade and 70 GW/year in 2031-2035 to meet President Biden's goal of a decarbonised power sector by 2035, the Department of Energy (DOE) said in a report last year.

Last week, Democrat Senator Joe Manchin agreed to support the bill following months of deadlock with the Biden administration. Manchin is Senator for coal-reliant West Virginia and his support is critical for passage of the legislation in the evenly divided Senate as it lacks any Republican backing.

The bill would reduce carbon emissions by roughly 40% by 2030, Senate Majority Leader Chuck Schumer said. Biden aims to cut U.S. emissions by at least 50% by 2030.

“This legislation is the most transformational investment America has ever made in our climate future," Abigail Ross Hopper, CEO of the Solar Energy Industries Association (SEIA), said. "Now the work can begin to build out America’s clean energy economy with historic deployment, domestic manufacturing, investments in low-income communities, energy storage, smoother interconnection, and so much more."

Developers installed a record 17 GW of utility-scale solar in 2021 and followed this with 4.2 GW in the first half of this year, EIA said, based on data reported by developers. Installations typically accelerate towards the end of the year as developers strive to meet tax credit deadlines.

U.S. developers have faced additional price uncertainty following an investigation by the U.S. commerce department into import tariffs on the four largest supplier countries in Southeast Asia. In response, President Biden waived import tariffs on solar panels from Malaysia, Thailand, Vietnam and Cambodia for two years in an attempt to ease the uncertainty that has delayed projects and curbed investments.