Grassroots advocates work to change the narrative around nuclear

Nuclear power advocates, often with little or no direct connection to the industry, can be vital in changing the narrative surrounding nuclear in the eyes of the public. 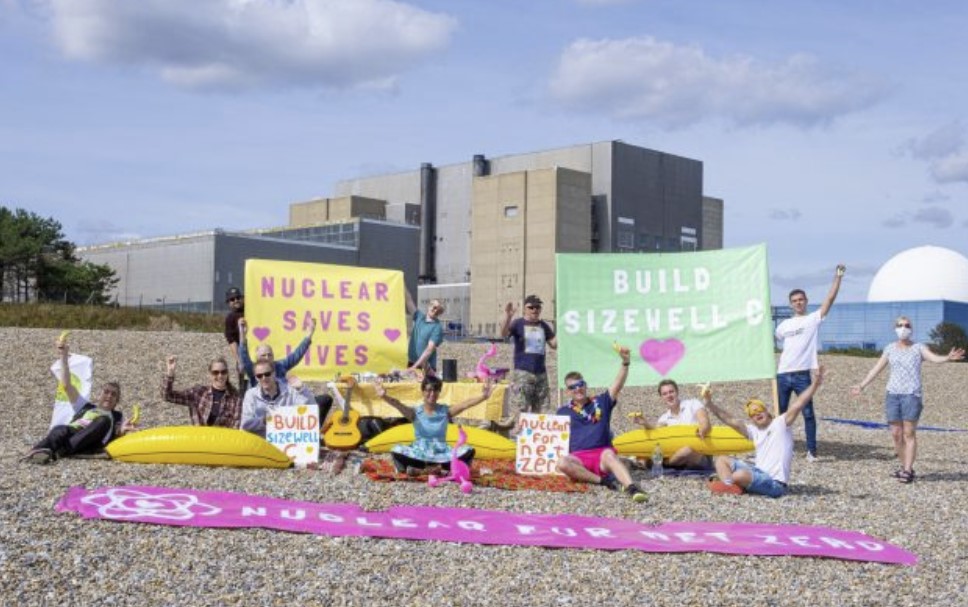 The meltdown at Chernobyl set the tone for nuclear reactors in the public's mind and popular culture, such as The Simpsons, helped solidify the image of nuclear owned by greedy, evil corporations producing green, toxic slime in leaky barrels, and three-eyed fish in local waterways.

After Fukushima in 2011, amid a new wave of public concern and as gas prices dropped, countries moved away from nuclear power while the technically-minded nuclear industry, operated via direct state ownership and power utilities, kept largely quiet.

However, as climate change concerns grew, a new generation of science-driven environmentalists began to question the traditional anti-nuclear narrative and began to organize.

“Activists are powerful communicators and that's why nuclear has been seen so negatively for so many years – anti-nukers have controlled the narrative,” says Zion Lights, the once-spokesperson for the British arm of the global environmental activists Extinction Rebellion (XR) and now one of nuclear power’s most vocal supporters.

Lights, a science communicator who has written about, among other things, GMOs, vaccines, climate change, and clean energy, changed her stance on nuclear power after a friend corrected her position on the Fukushima disaster and the technology as a whole.

“I persisted in reading up on the issues and asking him questions, because in the back of my mind I had a niggling feeling that a) I might be like an anti-vaxxer about nuclear (!) and b) I had some awareness that the loudest voices against nuclear in The Green Party, Extinction Rebellion, and other green groups I was involved with did actually talk a lot of nonsense on other issues,” she says.

Lights has not been embraced by many in the nuclear community and, in fact, has faced criticism after stunts such as a staging a picnic and swim in the sea next to south-England’s Sizewell nuclear power plant in 2020.

The event was part of a pro-nuclear rally aimed at illustrating how safe nuclear power was and to call for the construction of the country’s long-delayed large reactor project, Sizewell C.

Despite the plant being a much-need addition to Britain’s dwindling power generation capabilities, Lights received calls from the operators asking her to stop the demonstrations.

“They are afraid of communications, of something going wrong. And I said, you need to start selling your product,” she says.

Russia’s invasion of the Ukraine in March and the subsequent slow down of fuel supplies, especially painful for Europe, has focused many people’s minds and even world-renowned climate activist Great Thunberg in October told German public broadcaster ARD that the country’s plans to close plants was, maybe, ill advised.

“If we have them already running, I feel that it's a mistake to close them down in order to focus on coal,” Thunberg said, breaking ranks with the German Green Party and shocking many of her environmentalist supporters.

Extending the life of the plants was already on the cards as a fuel-scarce winter approaches, but the news less than a week later that German Chancellor Olaf Scholz had decided to keep the country’s three remaining power plants running for another six months shows a little activist commentary can at least do no harm.

The industry’s own efforts to convince the public, politicians, and investors have often fallen on deaf ears and have reverted to defensive arguments – ‘We’ll make it safer” – rather than highlighting the already high levels of safety on offer and benefits of a virtually limitless supply of clean electrical power, says critics.

Part of the communication failure has been due to the disjointed nature of the large nuclear reactor business model, often run by utilities that have little incentive to sell one generating technology (which faces considerable public pushback) over another.

With voters largely against, or ambivalent, toward nuclear power, politicians struggle to commit to the long-term construction of more power plants, making the whole affair considerably more expensive.

As legislators bounce between different stances on nuclear, investors demand ever higher premiums on lending to companies to cover the relative risk of a project that could be abandoned by any given country’s next political leaders.

“What you’ve got is a small number of companies dotted around the world who have some exposure to nuclear. Very few of them are clearly incentivized to make a public case for their product,” says Head of Climate Solutions, Legal & General Investment Management Nick Stansbury.

“As opposed to standing up and declaring that nuclear is vital, impactful, clean … they don’t get on the front foot and declare a positive case. They still feel, as an industry, that they’re a bit under the boot.”

The new generation of nuclear reactor companies, meanwhile, have aggressively marketed their products and are making some headway toward convincing people that their reactors are a safer and cleaner solution.

Importantly, these companies have smart, dedicated, and media savvy communications people that can spread the word in a way that people are willing to listen to.

“I find a lot of success just presenting facts in a compelling and engaging way because it’s hard for people to deny evidence-based facts,” says Oklo’s Director of Communications and Media Bonita Chester.

Oklo’s co-founders Jake Dewitt and Caroline Cochran appear in Oliver Stone’s latest work, “Nuclear”, a soon-to-be released documentary calling for a rethinking of the power source and the latest cheerleader for a technological solution that badly needs as much good press as it can get.

Finding the right audience and what they might be receptive to is key, she says.

“You have to be super mindful with who you are trying to communicate with, what might be important to them, what type of communication style might work, and through what medium… It's all about finding the common ground.”