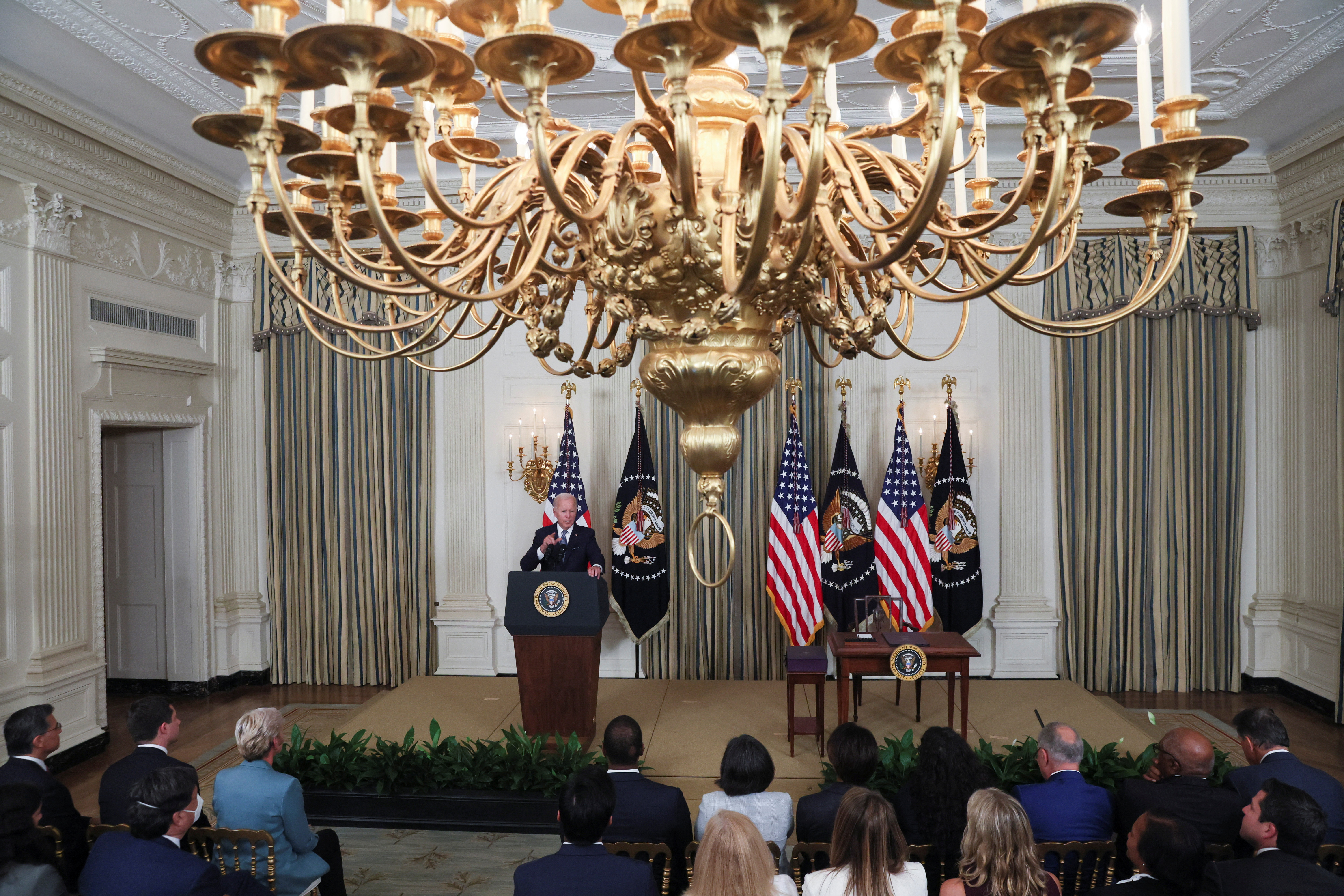 The IRA, which details investments worth around $370 billion in energy security and climate change policies, was passed along strict party lines – the act did not win a single Republican vote in the Senate – but contained provisions for the civil nuclear program long sought on both sides of the aisle.

The potential short-fall of hi-assay low-enriched uranium (HALEU), the fuel of choice for many next generation reactors, was also addressed in the bill, a provision that was well received amid international efforts to isolate Russia, a central player in global HALEU production.

“The energy provisions in the Inflation Reduction Act send a clear signal that nuclear is essential to the transition toward a carbon-free economy that also provides long-term, quality clean energy jobs,” president and chief executive officer of the Nuclear Energy Institute Maria Korsnick said in a statement.

“The investment and tax incentives for both large, existing nuclear plants and newer, advanced reactors, as well as HALEU and hydrogen production, set nuclear energy on a level playing field, ensuring that nuclear can form the backbone of a stable electric grid that also includes large shares of wind and solar.”

By including nuclear power as a clean energy alongside renewables, the U.S. act took a step further than other efforts to classify the technology’s contribution to the energy transition such as the European Union taxonomy which posited a number of conditions for nuclear’s inclusion alongside solar and wind.

Support for old and new

The bill included provisions for the U.S.’s 93 operating nuclear reactors, some of which have faced threats of closure due to bad economics, and for the new generation of advanced reactors, many of which are expected to become commercially viable before the end of the decade.

The Production Tax Credit (PTC) creates a credit of $15 per megawatt-hour for electricity produced by existing nuclear plants, though this declines as power prices increase and is provisional on contractors and subcontractors not being underpaid, the American Nuclear Society detailed in an analysis of the bill.

The technology-neutral PTC includes advanced nuclear and power uprates that are placed into service in 2025 or after, with a value of at least $25 per megawatt-hour for the first 10 years of operation.

The Investment Tax Credit (ITC) meanwhile provides the option of claiming a clean electricity credit for new zero-emissions facilities of 30% of the investment.

Both the ITC and PTC include a 10-percentage point bonus for new facilities sited in energy communities, such as new plants located on retired coal mining operations.

The PTC extends to clean hydrogen, including nuclear-produced hydrogen, with a $3 per kilo credit for the first ten years of operations, depending on levels of emissions produced and wages paid.

“These tech-neutral investment tax credits and production tax credits will possibly have the biggest immediate effect on the advanced nuclear industry, because they make projects even more economical and they will incentivize investment in new technologies,” says Policy Advisor, Climate and Energy Program at Third Way Ryan Norman.

“You also have this zero-emission nuclear production tax credit that’s specifically for existing reactors. That will support the continued operation of these plants with the incentives provided and will also go a long way to ensure energy communities are being provided for. There are a lot of incentives to keep those plants running and keep powering those communities.”

The bill also addressed high lending rates for nuclear operators with authority for the DOE’s Loan Program Office to employ up to $40 billion in additional section 1703 loan authority, and $3.6 billion as a direct appropriation to cover loan guarantee costs.

Politicians from both parties have come together in a rare sign of unity to condemn Russia’s incursion into Ukraine and legislators agree that the United States should strive for energy independence from the Russian state, including the nuclear industry.

Nine out of ten reactors funded by the Department of Energy’s (DOE) Advanced Reactor Demonstration Program (ARDP) will need HALEU to run and Russia is currently the only viable commercial supplier of the fuel.

The IRA includes $700 million for research, development, and production of domestic HALEU, easily meeting industry hopes after the American Nuclear Society (ANS) called for funding of close to $200 million for the HALEU program following a pledge of $45 million in the Fiscal Year 2022 Omnibus appropriations bill in March.

“Uncertainty around HALEU supply has been a bottle neck concern for the advanced reactor industry. This additional funding may help propel some of the projects that had been constrained by that uncertainty in the past. The legislation is going to be game changer,” says Ryan Lighty, partner at law firm Morgan Lewis and advisor on litigation, transactions, and regulatory matters involving nuclear reactors and nuclear materials.

Supporting the domestic supply chain has been a cross-aisle theme for years and, while no Republican Senators voted for the IRA, behind the scenes there will be a collective celebration over its support for the nuclear industry.

In April, Republican Senator John Barrasso introduced the ‘Fueling Our Nuclear Future Act of 2022’, which called for the establishment of domestic HALEU enrichment capability and availability of HALEU for the Advanced Reactor Demonstration Program (ARDP).

The ‘International Nuclear Energy Act of 2022’, a bill designed to promote the international use of U.S. civil nuclear technology and as a counterbalance against reliance on Russia and China, was introduced by Democrat Joe Manchin (who notoriously was instrumental in the failure of President Joe Biden’s more ambitious Build Back Better plan) and Republican James Risch.

“Although the bill as a whole was criticized by some as partisan, the nuclear provisions had broad bipartisan support,” says Lighty.

“It’s that unicorn of policy where Republicans and Democrats can find something to agree on, which is certainly refreshing -and something we all need.”