Women and children first: how brands are innovating to help China's female workers

With women earning 35% less than men and facing long separation from children, Nadine Hawa reports on how initiatives like HERproject and Plan W are helping to address the gender gap

The issue of women’s rights has been a hot topic over the past year, with many women-centric campaigns, namely the “me too” and “time’s up” movements, gaining traction as they spread globally from the US.

In countries like China, however, where tight censorship rules exist and women’s-rights groups are treated with hostility by the government, women often struggle to have their voices heard and human rights met, according to Human Rights Watch. It points out that China has no law protecting people from discrimination on the basis of sexual orientation or gender identity, and there is no legal recognition of same-sex partnership.

Most women working in factories in China are migrant workers. They are isolated and lack a support network

While women make up 57% of China's labour force and have contributed most to the country's unparalleled economic boom over the past three decades, they earn on average 35% less than men for doing similar work, ranking in the bottom third of the Global Gender Gap Index. They also face discrimination based on maternity, with employers choosing to hire only women who already have children and denying pregnant women statutory leave, according to the United Nations Human Rights Council reports.

“Most women working in factories in China are migrant workers and many of them work thousands of miles from their homes,” says Christine Svarer, director of HERproject at Business for Social Responsibility (BSR). “They are isolated and lack a support network, which means that they can struggle if the factory does not help them to adapt.”

HERproject launched in 2007 in five factories across Guangdong, a province in southern China with a large concentration of labour-intensive manufacturing factories. It brings together major international companies and their suppliers to implement workplace-based training programmes for women. The companies commit to empowering women in their supply chains and work with BSR to co-ordinate and implement the programmes in supplier factories. 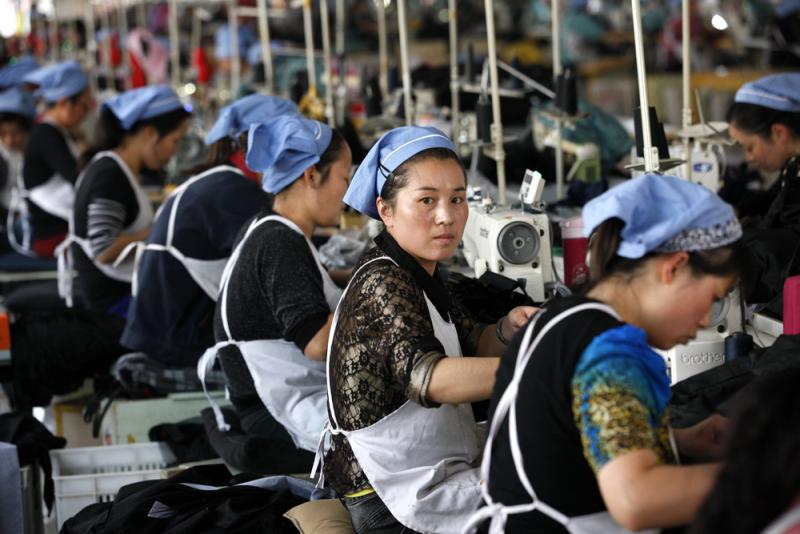 Women, many of them migrants, make up 57% of China’s workforce. (Credit: Frame China/Shutterstock)

“In the past 10 years, BSR has collaborated with over 30 international brands in China, including Abercrombie & Fitch, Burberry, Columbia, Deckers (UGG), Jabil, Target, and Williams Sonoma, and has reached more than 180,000 female workers in over 160 factories across the country,” Svarer said.

HERproject recruits women from the production line and trains them in everything from health, nutrition and hygiene, to public speaking and effective communication, so they can pass these skills on to other female workers, a model known as peer education. “This means that peer educators recruited from the production line can gradually develop their abilities to conduct peer-to-peer trainings and can improve their communication skills and confidence,” Svarer explains.

BSR also runs the Women in Factories China Program in partnership with the Walmart Foundation's Global Women’s Economic Empowerment Initiative. As of August 2016, 51 factories had been recruited for the programme in China’s coastal and mid-east regions, training 56,511 women. Feedback has been good: 70% of employees said that foundational trainings helped them better adapt to factory work. 72% said the skills learned in the trainings helped them better solve problems at work and in their personal lives, while 80% said their self confidence and communication skills improved.

Young female employees don’t just want to earn a living, they want to learn and advance

Peer training is also the basis of collaboration between tech firm HP and beverage giant Diageo, called Plan W, to provide training and practical skills for women in factories.

“The trainings expose women to information they don’t normally have access to and foster a direct line of communication, peer support, and exchange of ideas, which in turn instils confidence and motivation.” Furthermore, through training, women workers can have a larger impact as independent wage earners and consumers. 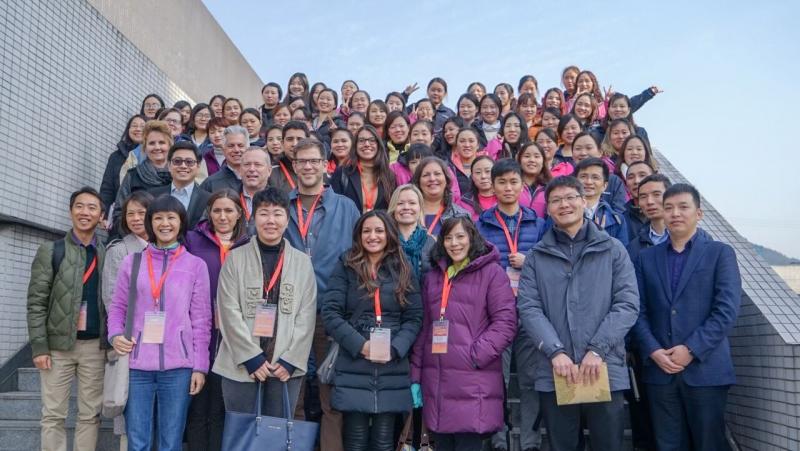 According to HP’s code of conduct, suppliers must implement ongoing processes, including an effective grievance mechanism, to obtain feedback on perceived violations against practices and to foster continuous improvement. “We regularly audit against this requirement and interview the factory workers when onsite at a facility,” Bustamante says.

“We also work with local and international NGOs and other stakeholders who are familiar with local language and culture, to engage employees and build trust for reporting instances of discrimination or other concerns. Last year, we sponsored industry code changes that focused on the rights of post-pregnant women in the workplace. The new code now specifically requires that facilities accommodate nursing mothers even in the absence of any laws requiring this. This provision helps women to settle back to work easier after a pregnancy if they so choose.”

An important challenge is raised by the fact that the majority of workers are migrants, often working thousands of miles away from home. Because of the hukou citizenship registry mechanism, which ties people's access to social services in their hometowns, Chinese women workers are often separated from their children

“Migrant women workers do not have the local hukou,” BSR’s Svarer explains. “And schools usually accept only children whose parents can demonstrate local residency. This means that women workers often cannot bring their children with them when they migrate as they cannot find schools to take them (and school fees are in any case beyond their means). In China, these children are called “left-behind children”, because they remain in their home towns with their grandparents while their parents work.”

Chinese women workers often see their children for only a few days a year. Furthermore, left-behind children, especially girls, are frequently victims of sexual abuse, something their mothers are either not aware of or unable to prevent,” Svarer adds.

In June 2017, the Beijing-based Center for Child Rights and Corporate Social Responsibility (CCR CSR) released a study examining migrant parent workers and the impact that separation from children had on them and their work-related decision making. From the Factory with Love: A Study on Migrant Parent Workers in China, also presents strong evidence that links factories and brands’ lack of support towards migrant parents with decreased retention and work satisfaction. 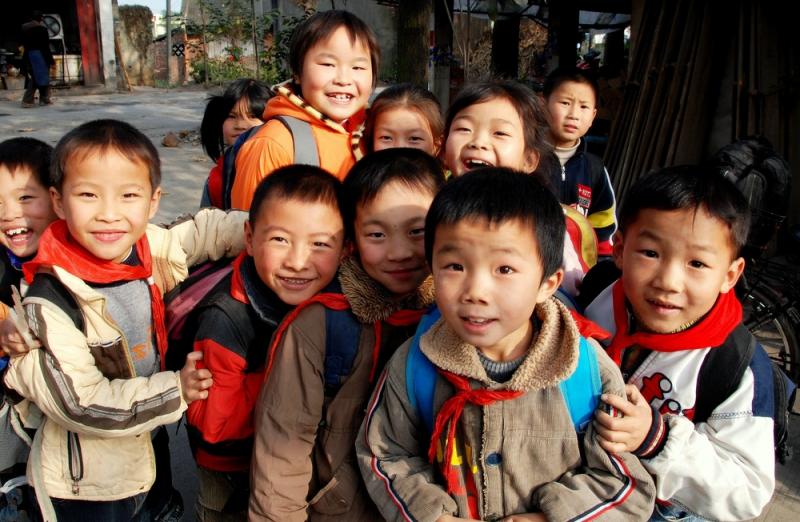 Children in villages are often left behind as parents migrate for work. (Credit: Lee Snider/Shutterstock)

The study found that 74% of parent workers are still migrating without their children, citing lack of time and childcare options as the main reasons for leaving their children behind.

According to the study, the challenges faced by migrant parent workers in China’s factories run even deeper: more than 95% of parents who don’t live with their children expressed feeling guilty about their inadequate parenting functions.

As one might expect, workers who perceive their work as having a negative impact on their personal life are less likely to be satisfied with their workplace, affecting motivation, performance and retention at work.

But even those who migrate with their children face challenges. The study found that children who migrated with their parents spent more time unattended than other children of factory workers, indicating that lack of childcare and long working hours is a pressing challenge for many migrant parents, and that there is a strong need for support in these areas.

The Ethical Toy Program, which runs an ethical certification programme covering more than half China’s toy factories, holds migrant parent training workshops for thousands of workers. It has also created family-friendly spaces (FFS) at 14 toy factories in partnership with the CCR-CSR. The project, now in its second year, reunites migrant workers with their left-behind children during the summer months, creating a safe space to learn and play while their parents work. (See China's toy industry in push to clean up its image) 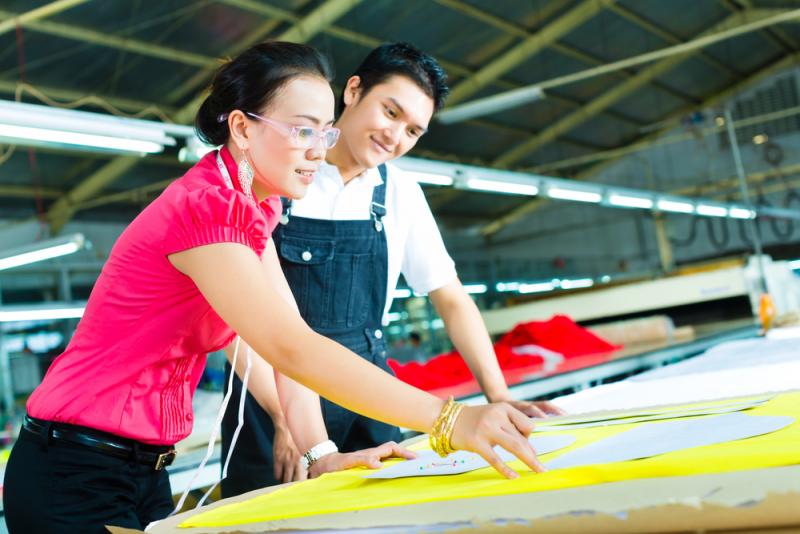 This year the programme will also pilot After School Centres, factory-based facilities where children are taken care of after school until their parents finish work. Brands that support the programme include LEGO, Mattel, Target, Crayola and Hallmark.

Mark Robertson, senior vice-president of communications and stakeholder engagement at the Ethical Toy Program, said: “These projects also help companies create a toy industry where children’s products are made by workers who are supported in their role as parents, thereby ensuring that toys are manufactured in a way that is consistent with the values of the industry.”

Women will continue to make up the majority of China’s manufacturing sector. Most are not only seeking a steady job but career growth and to become leaders in their workplaces. Businesses that invest in supporting and empowering women through skills, education, healthcare and childcare will be better equipped to succeed.

Nadine Hawa is a former CNBC business news presenter and producer. She has also been a sustainability consultant, working on projects with organisations including the UNEP and RSPO. She has been a regular contributor to Ethical Corporation magazine since 2012.

This article is part of the in-depth briefing China’s New Dawn. See also:

IKEA and Audi pulled up for sexist marketing

Amazon, Twitter and Netflix make first climate disclosu...
When it comes to net zero, business will be the driving...
New drive to police ‘wild west’ of net-zero targets...
Scorched earth strategies: How Cargill, Unilever and Di...
comments powered by Disqus