Danish power company Dong Energy last year announced a permanent shift away from fossil fuels and a firm focus on renewables, describing it as a move from "black" to green energy. Along with this change came a new name – Danish Oil and Natural Gas became Ørsted, after Hans Christian Ørsted, the Danish scientist who discovered electromagnetism two centuries ago. Unfortunately, the new name did not sit well with Ørsted’s descendants, who in January threatened legal action.

Ørsted’s latest sustainability report explains how the company has been phasing out fossil fuels over the past decade. It has reduced coal consumption by 73% and committed to completely phase it out by 2023. Carbon emissions have halved and will have reduced by 96% by 2023. Ørsted’s transformation culminated last year in the divestment of its upstream oil and gas business, part of the reason for the name change.

The report also declares Ørsted’s firm commitment to the SDGs and outlines the three key pillars of its sustainability strategy: a world that runs entirely on green energy; enabling sustainable growth; and business integrity. Under the first pillar, the company uses two technologies for producing green energy: offshore wind and biomass-fired power stations.

The cost of offshore wind has dropped by 60% in five years, which the report describes as a “game changer”. As CEO Henrik Poulsen says: “2017 will be remembered as the year when newly built offshore wind became cheaper than black energy. It has never been more clear that it is indeed possible to create a world that runs entirely on green energy.” 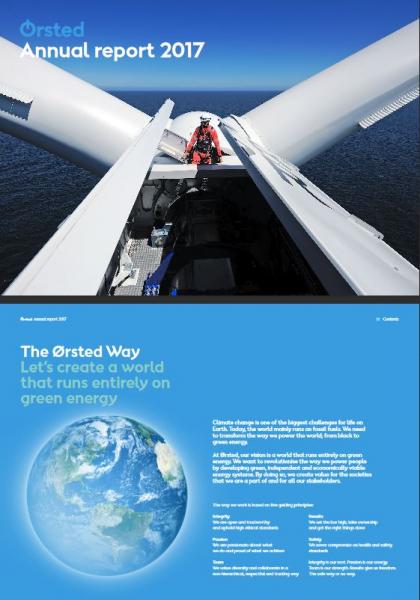 The company owns 23 offshore wind farms, with five under construction. With a number of European projects in the pipeline, it has 25% of the global market share of offshore wind and is now setting its sights beyond Europe, aiming to power 30 million people by 2025 with projects in places such as Taiwan and the US.

If offshore wind is to have a future, significant, large-scale upgrades to grids need to be achieved to manage greater demand. Ørsted says it is taking “more extensive responsibility” for keeping the grid in balance. For the past decade it has developed its own power stations to operate with flexible capacity levels to match the increased supply from wind power.

Land, forests and thus biomass are limited resources, which means there are competing uses of materials

It is also exploring different energy storage solutions, which could provide an alternative to expanding grid capacity by providing a cost-effective way to deliver power when consumption is highest. One such project is the UK’s Burbo Bank offshore wind farm, which has what Ørsted describes as a “first-of-its-kind offshore wind power and battery hybrid system to stabilise delivery frequency to the UK grid”.

The company’s second technology, biomass, presents thornier problems. The report acknowledges that biomass can be unsustainable and the company operates under a number of strict sustainability criteria, using biomass certified by the Sustainable Biomass Partnership, an alternative to the FSC and PEFC that is specifically for woody biomass used in industrial, large-scale energy production. 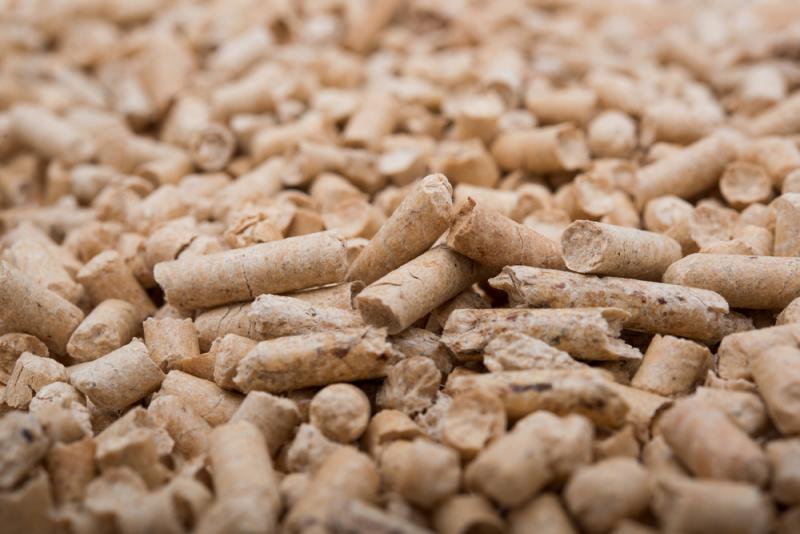 Ørsted's report acknowledges that biomass can be unsustainable. (Credit: tchara/Shutterstock)

Linde Zuidema, bioenergy campaigner at forest NGO Fern, sounds a note of caution about biomass's role in the energy transition. “Looking at the energy sector, that role can only be a limited one,” she explains. “That is simply because land, forests and thus biomass are limited resources, which means there are competing uses of raw materials. Forests in particular also play a crucial role in mitigating climate change while they remove and store carbon from the atmosphere.”

Ørsted has funded a Copenhagen University research project to find the right type of biomass to use, and holds regular meetings with NGOs and stakeholders to gather feedback. The company believes that thinning wood and wood waste from forests and sawmills results in the biggest carbon savings.

However, Fern believes that countries must exercise great caution in promoting the harvesting of carbon to be burned for energy: “The CO2 resulting from it warms the atmosphere just as effectively as CO2 from coal -burning,” says Zuidema, citing recent EU rules, which assume that the use of forest biomass is carbon neutral. “Science has repeatedly warned policy makers this assumption is wrong,” she says. “Trees grow back slowly and the emissions cannot be re-captured in a timeframe relevant for climate change mitigation.”

Ørsted is also making inroads in terms of the circular economy. Its Renescience technology turns household waste into recyclable plastics and metals as well as biogas, and the company claims that most of the waste from an average household is able to be recycled.

A new Renescience plant in Northwich, Cheshire, will go become operational during the first half of this year and will treat 120,000 tonnes of unsorted household waste annually (equivalent to the annual waste from approximately 110,000 households). Ørsted says the Renescience plant will enable recovery of enough metals to produce 3,700 cars every year, while the biogas produced will generate 5MWh of electricity, enough for 9,500 households.

By tackling sustainable energy in a holistic way Ørsted hopes that its dream of a world that runs entirely on green energy may not be as radical as it seems.

Policy Watch: Why more energy storage is key to turning...
Delivering the green energy transition in balance with ...
The race to clean up the world’s most heavily emittin...
NGOs call for bioenergy to be removed from EU sustainab...
comments powered by Disqus