With the 20km of land that surrounds urban areas home to 40% of all global croplands, the Ellen MacArthur Foundation believes the road to a more circular food system starts at city hall. Mark Hillsdon reports

The way in which food is produced is under ever-increasing scrutiny, from the failings of factory farming, to the health dangers of over-processed foods and the growing damage that agriculture is doing to the soil in which we expect crops to grow.

Add in growing levels of food waste, water pollution caused by fertiliser run-off, and the fact that the agri-food industry accounts for nearly 25% of all greenhouse gas emissions, and the time seems ripe to shift our traditional linear food system to a new circular economy for food.

These were some of the key thoughts in last year’s Cities and Circular Economy for Food report from the Ellen MacArthur Foundation (EMF), which have since formed the basis for the organisation’s Food Initiative.

The EMF report predicts that by 2050, 80% of all food will be consumed in cities. While urban areas currently produce little more than a third of the food they need, the 20km of land that surround cities are home to 40% of all the global croplands. Reconnect with these farms, the foundation reasons, and cities could be at the centre of a food revolution.

“It’s about bringing the production closer to consumption and re-writing the logic of supply chains,” explains Emma Chow, food initiative lead at EMF, who points out that much of the food grown in these peri-urban areas ends up being exported, with similar produce then imported back into the cities from further away. “It makes no sense,” she says.

This reconnection between cities and the farms on their doorsteps can also help to change farming practices, says Chow. Cities have huge demand power: they can dictate what is grown, and by connecting with regional farmers they can start to build direct relationships and become active catalysts of change, rather than passive consumers, says Chow. 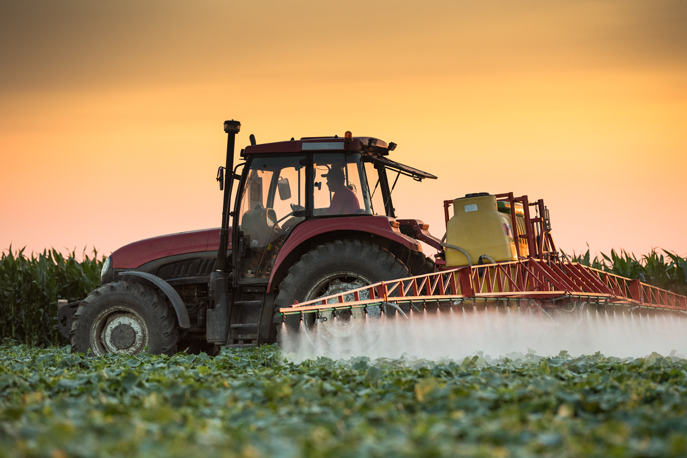 Bringing circulatory principles to the food economy is a more complex proposition to closing the loop around a manufacturing process, where there are clear lines for recycling and reusing.

The circular economy for food revolves around three principles: designing out waste and pollution, keeping products and materials in use, and regenerating natural systems.

One of EMF’s partner in its food initiative is Brazil’s largest city, São Paulo. The city estimates that its total demand for fruit, vegetables and leafy greens could be fulfilled by using 54% of the existing peri-urban cropland. Projects involve turning 25% of municipal organic food waste into fertiliser for local farmers to support regenerative farming, and promoting soil health and a greater diversity of local crops for the city’s thriving restaurants, yielding savings worth an estimated $140m in areas such as landfill and health costs, as well as job-creation.

When we talk about regenerative farming systems, it’s not just about converting what we’ve got; it’s completely changing the way we farm

Unfortunately, São Paulo, along with two other major partners, New York City and London, happen to be among the hardest hit by the Covid-19 pandemic, forcing postponement of some of the planned announcements.

But there are other cities where ambitious circular food economy initiatives are going ahead. The Canadian city of Guelph, which was featured in the EMF report, has set out to build Canada’s first tech-enabled circular food economy through its Our Future Food project, which is increasing access to affordable food, creating 50 new circular economy businesses and supporting a 50% growth in revenue generated from eliminating food waste.

The city’s 10-point Covid-19 recovery plan, which was launched in May, included several food projects, including its innovative Circular Food Economy iHub, which harnesses data and technology to enhance food security and support a more sustainable food economy. 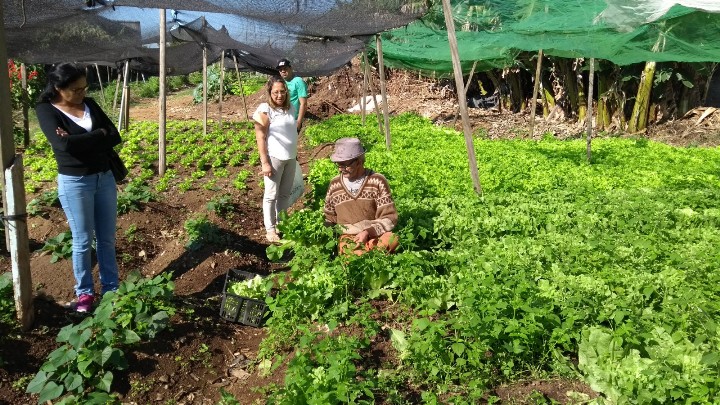 Vacant urban land has been turned over to growing food in community gardens in São Paulo. (Credit: Cidades Sem Fome)

The UK food retailer Waitrose is working with the EMF around regenerative farming as one way in which it can bring greater sustainability to its operations, explains the company’s environment manager Benjamin Thomas.

But the issue is vast, he says: “The problem with the agriculture industry is it’s such a global industry that when we talk about regenerative farming systems, it’s not just [about] converting what we’ve got; it’s completely changing the way we farm.”

Regenerative farming is based on ideas such as switching from synthetic to organic fertilisers, more crop rotation and greater crop variation, which can help to promote biodiversity. Practices like this promote healthy soils, produce better tasting, more nutritious food, and also turn fields into carbon sinks, casting them as solution to climate change rather than a cause.

Other EMF partners are finding new uses, and a new value, for food by-products such as peelings, husks, stems and stalks, as they’re turned into products such as compost, bio-fertiliser and animal feed, and diverted from landfill or the incinerator.

Japan’s Mizkan Holdings, whose products include Sarson’s vinegar, first produced vinegar using left-overs from sake production more than 200 years ago. “This mentality of using natural by-products to create something of higher value and contribute to new food culture is something that has continued at our company,” explains head of sustainability, Nahoko Aritomi.

The company has recently launched a new range of plant-based products based on the principles of the circular economy. By using the entire vegetable, such as the stem and seeds from bell peppers, cobs from corn, and the seeds and skins of pumpkins, all waste is avoided, says Aritomi. 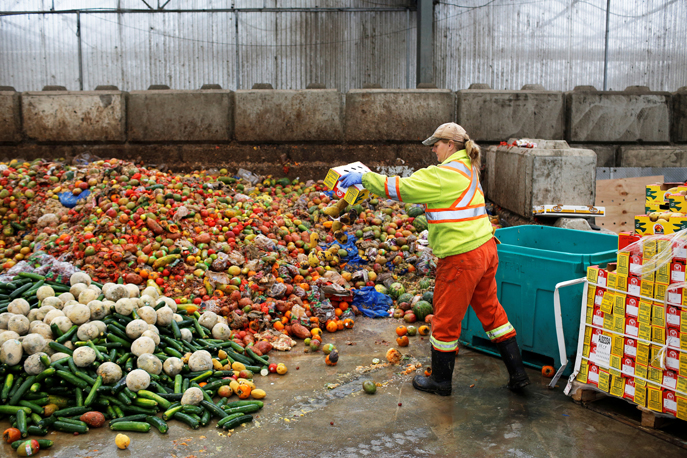 “This allows consumers to enjoy the nutrition from more parts of the vegetable, including those often overlooked, whilst it’s also helping raise awareness of issues around food waste,” Aritomi says.

Advance London, which is run by the London Waste and Recycling Board, is supporting SMEs that are helping to further the capital’s circularity. These include brewers Toast, who have replaced barley in the brewing process with surplus bread, and Chip[s] Board, which is using potato waste to develop bio-plastics for products such as frames for glasses.

In March, Feitosa Foodtech, a startup from the Brazilian city of Porto Alegre, became the first winner of the Circular Economy of Food Prize. Run by Thought For Food (TFF) and Google’s Food Lab Accelerator at Google, the company uses surplus bananas and their skins to produce a range of products such as ketchups and jams.

UK-based Rubies in the Rubble, meanwhile, uses surplus food that would otherwise be labelled as waste to supply a range of condiments to supermarkets and restaurants.

The company works with large-scale farmers, buying up so-called “wonky veg”, produce with a limited shelf life and excess edible food which, says company founder Jenny Costa, has often been produced because of the failure of the system to match supply and demand.

“It’s crazy that we have this attitude towards food and we can be wasteful with it,” she says.

But it’s a problem that has been emphasised by the current Covid crisis, she continues. “Whilst farmers are chucking away huge volumes that they were supplying to restaurants, we can’t pivot quick enough to then stock the empty shelves in supermarkets. It just highlights the complexity of the food supply chain.” 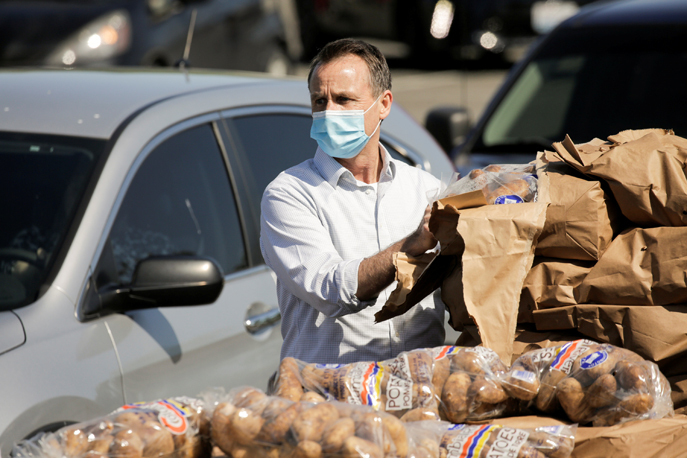 Potatoes that would otherwise be wasted amid Covid-19 are handed out in Washington. (Credit: David Ryder/Reuters)

But it’s not just business that has a role to play, she says, consumers need to change too, eating more seasonally and embracing gluts of produce, cooking with them rather than ingredients which are in more limited supply.

“We need more diverse ecosystems, less specialisation, and a circular food economy that is truly regenerative to help address the challenges of a growing population. The prevailing linear system is impossible to sustain within our planet’s resources.”#

This article is part of our in-depth Circular Economy briefing. See also:

Why are consumers failing to plug in to the circular economy?

How Covid-19 has brought circularity into sharp focus for Philips

Will 2023 be a watershed moment for corporates on addre...
Brands failed to meet promises to protect forests. We c...
Can Big Food rise to the climate challenge?
Beef and dairy farms pushed to innovate to tackle metha...
comments powered by Disqus